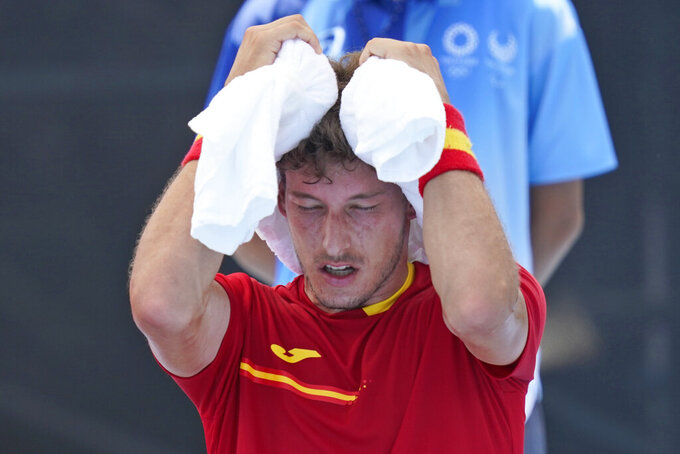 Pablo Carreno Busta, of Spain, tries to keep cool between games against Dominik Koepfer, of Germany, during the third round of the tennis competition at the 2020 Summer Olympics, Wednesday, July 28, 2021, in Tokyo, Japan. (AP Photo/Seth Wenig)

RIFU, Japan (AP) — A tropical storm dumped rain in parts of northern Japan on Wednesday after moving away from the Tokyo region and relieving the Olympic host city of a feared disruption to the games.

In Sendai, some trains were delayed and pedestrians braced themselves against the wind on the city streets.

Tropical Storm Nepartak has caused no damage, but the Japan Meteorological Agency urged residents to take caution against mudslides. Up to 10 centimeters (4 inches) of rain was forecast across the northern region.

Office worker Mitsuyoshi Saito in Sendai said the storm wasn't that strong. “In some areas, it seems to have heavily rained, but I’m glad there was no damage.”

The season’s eighth typhoon for Japan blew ashore far northeast of Tokyo and had winds of 65 kilometers per hour (40 mph) at midmorning. It was weakening as it moved north and is forecast to move off the western coast of Akita by Wednesday night.

Nepartak was the first landfall in Miyaga prefecture since the weather agency started compiling typhoon statistics in 1951. Miyagi was part of the northeastern region devastated by the March 2011 earthquake and tsunami.

It moved further north than initially projected, causing only limited impact on the Olympics, with some events such as surfing and rowing rescheduled.