Troubled Zimbabwe hopes for some relief in tobacco sales 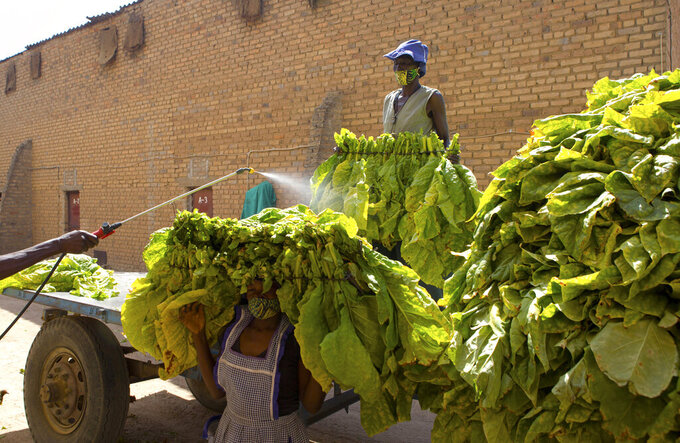 In this photo taken Thursday, April 30, 2020, a worker sprays chemicals on a tobacco crop before they are stored in a tobacco barn at a farm outside Zimbabwe's capital, Harare. Troubled Zimbabwe has officially opened the tobacco selling season after a month-long delay amid a coronavirus lockdown. Tobacco is the country's second biggest foreign currency earner after gold, and it brought in about $750 million last year. (AP Photo/Tsvangirayi Mukwazhi)

HARARE, Zimbabwe (AP) — Adjust Saidi, a foreman at a farm outside Zimbabwe’s capital, Harare, paced through rows of tobacco plants. Desperate to complete the harvest and sell the crop, he pushed workers picking leaves to “hurry it up." Some carried up to 30 kilograms (66 pounds) of leaves, bound by wire, on their shoulders. Some wore face masks.

With most economic activity stalled by a coronavirus lockdown, troubled Zimbabwe last month officially opened the tobacco selling season after a month-long delay.

Tobacco is Zimbabwe’s second biggest foreign currency earner after gold, and it brought in about $750 million last year. Allowing tobacco selling gives the government an opportunity to ease acute foreign currency shortages in a country whose economy had been collapsing well before the virus.

The government's decision came as a relief to thousands of farmers who were already hard hit by a severe drought.

In a normal season, Saidi would be heading to the auction floors by mid-May but will only be able to finish harvesting at the end of the month because some workers have not reported for duty “fearing coronavirus,” he said.

Biggie Muronda said it took five hours to travel about 130 kilometers (80 miles) to the auction floors because of police harassment on the roads “despite producing the letter (authorizing movement).”

Zimbabwe's government later eased restrictions on movement and farmers were given special dispensation to move their crops without hindrance.

“We are not afraid of coronavirus," said another farmer, Walter Dangarembizi. “The risk is that farmers could be cheated out of their money due to the new guidelines which say we must give our crop to a representative who will come here to sell on our behalf.”

The new rules stipulating that crops will be sold in the absence of farmers are aimed at preventing thousands of farmers and their families, as well as vendors seeking to cash in on the farmers’ payouts, from camping at auction floors as usual.

Agriculture Minister Perrance Shiri said tobacco-buying companies should set up centers in districts outside Harare to avoid farmers packing the auction floors in the capital as part of the new measures.

Rodney Ambrose, the president of Zimbabwe Tobacco Association, a representative group for farmers, said the companies were yet to set up such centers in most parts of the country.

“So most farmers are likely to flock into Harare,” he told The Associated Press.

Zimbabwe has been experiencing a rebound in tobacco growing after the planting of the crop plummeted about two decades ago following often violent seizures of land owned by whites under former president Robert Mugabe’s controversial land reforms.

Last year, farmers produced 259 million kilograms, “a second consecutive record output,” said Pat Devenish, chairman of industry regulator the Tobacco Industry Marketing Board. The government says the rebound is justification that black farmers are up to the task.

The crop is down to about 230 million kilograms this year due to “grim” weather conditions, according to TIMB.

One of the world’s top tobacco exporters alongside Brazil, Zimbabwe sends most of its crop to China, Europe and the Middle East.

Shiri, the agriculture minister, said the coronavirus could affect exports.

“It’s likely to affect tobacco sales, yes, in that most countries have now directed their resources towards dealing with the coronavirus epidemic,” Shiri told reporters recently. “It’s too early to say how much it’s going to affect us."

As the minister spoke, an auctioneer rapidly announcing prices and an official using a loudspeaker to encourage social distancing competed for the attention of a few mask-wearing buyers allowed onto the auction floor.