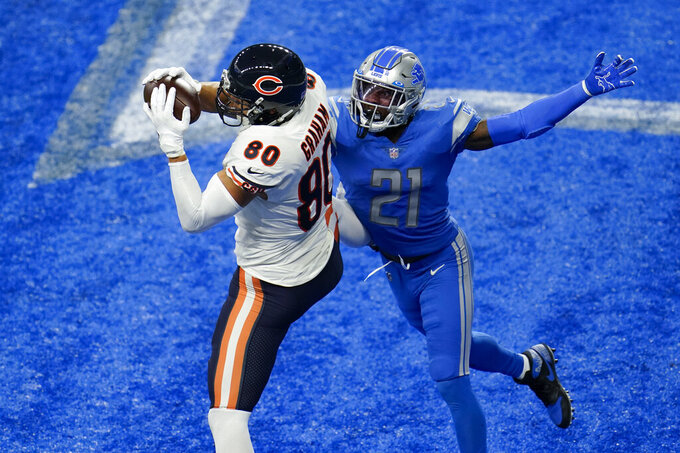 DETROIT (AP) — Mitchell Trubisky missed many targets, sailing some passes high and leaving other throws behind teammates, until it mattered most.

Trubisky perfectly lofted a 27-yard go-ahead touchdown pass into the fingertips of Anthony Miller with 1:54 remaining and the Chicago Bears held on to beat the Detroit Lions 27-23 on Sunday.

“We knew we weren’t out of it when we were down 17," Trubisky said.

Detroit drove to the Chicago 16 with a chance to win on the final possession, and rookie running back D'Andre Swift dropped a pass in the end zone.

On the next snap, Matthew Stafford threw another incomplete pass as time expired to complete the collapse.

Trubisky threw three touchdown passes in the fourth quarter to help Chicago rally from a 23-6 deficit. It looked familiar to Lions fans: Detroit opened last season by blowing an 18-point lead at Arizona and settling for a tie. That began a trend of blown leads and Detroit finished with a 3-12-1 record.

Trubisky, who held off Nick Foles to keep his job, completed 20 of 36 attempts for 242 yards with three touchdowns, including short passes for scores to Jimmy Graham and Javon Wims.

“He made some huge, huge throws, had some great moments," Graham said. “The kid wants it. The kid believes."

Stafford was 24 of 42 for 297 yards with a TD pass to T.J. Hockenson in the third quarter — and an interception that put Chicago in position to take its only lead of the game. He tried to force a pass to Marvin Jones that was deflected to Kyle Fuller.

“There’s plays we all wish we had back,” Stafford said. “I can’t turn the ball over in the fourth quarter, there’s no question about that.”

Adrian Peterson ran for 93 yards on 14 carries in his Detroit debut, just four days after signing with the team, and he plans to lead the franchise with his play and words.

“We can’t let this define us," Peterson said.

The Lions are not allowing fans to attend their first two home games due to state restrictions on the size of crowds during the coronavirus pandemic, leading to a large expanse of empty seats and very little noise.

“I don’t know how to describe it," said Trubisky, using words including “weird" and “eerie" as he attempted to sum up the atmosphere.

To fill some seats at fan-free Ford Field and raise money for charities, cutouts were sold for $150 and about 500 of them filled some seats beyond an end zone.

Sound was piped into the indoor stadium, but it was much more dull than a roar because the NFL is limiting how loud artificial noise can be during games. And when a player was injured and evaluated on the field, the sounds were cut off; the only thing heard was the venue's air-conditioning system.

The teams took turns kicking field goals before Swift scored on a 1-yard run to put the Lions ahead 13-6 late in the half.

Stafford was 4 of 4 for 49 yards with the 4-yard TD pass to Hockenson on the opening drive of the second half. He led a drive later in the third quarter that gave Detroit a 17-point cushion.

That wasn't enough of a lead, and embattled coach Matt Patricia wanted to let Swift know it wasn't his fault that the game was lost.

“I put my arm around him as soon as we got to the tunnel, walked up the tunnel with him and told him he’s a great player," Patricia said. “The game’s not on him. It’s on me."

Chicago cut into its deficit with Trubisky's 2-yard pass to Graham early in the fourth period and his 1-yard throw to Wims to pull within three points with about three minutes left.

YOU’RE OUT OF HERE

Lions linebacker Jamie Collins was ejected in the first half when he made contact with an official, pressing his helmet against Alex Kemp's chest.

Hockenson is the first NFL tight end to score a TD and have 50 yards receiving in his first two season openers.

Lions: At Green Bay on Sunday.