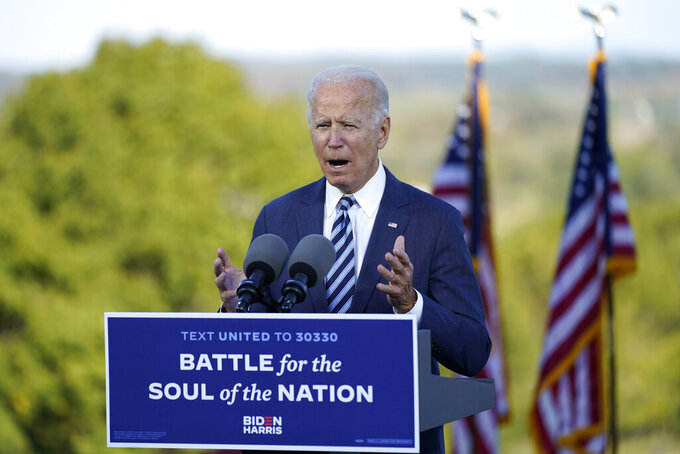 WASHINGTON (AP) — President Donald Trump’s return to the White House is poised to reshape the campaign’s final four weeks as aides debated Tuesday how to move past an extraordinary setback while grappling with how to send an infected president back on the road.

A race that had remained steady throughout the tumult of 2020 now threatens to slip away from the president after he spent 72 hours hospitalized with COVID-19, the very disease that has fundamentally altered the country he leads and the campaign he wanted to run. And as Democrat Joe Biden stood on one of the nation’s most hallowed grounds to call for national unity, the president, in his first full day back in the executive mansion, plunged Washington into further chaos by abruptly ending coronavirus relief talks.

Trump had stage-managed his dramatic, if reckless, reentry to the White House — tearing off his mask before stepping back inside Monday — and was pushing aides to return to the campaign trail as soon as possible, including to next week’s second debate against Biden. But as the president remained contagious, his health under careful watch, a division emerged between aides over how to manage the fallout.

Some believed the moment could act as a late reset, allowing the president to draw from his own experiences to at last show empathy for those affected by a pandemic that has killed more than 210,000 Americans, left millions unemployed and sent his poll numbers tumbling.

But others believed that abruptly changing course after seven months of projecting strength over the virus wouldn’t work and instead advocated for intensifying the message as a means to further fire up the president’s supporters to turn out.

Trump made clear want he wanted.

“I am looking forward to the debate on the evening of Thursday, October 15th in Miami. It will be great!” he tweeted Tuesday, after previously posting an erroneous comparison between the dangers posed by COVID-19 and the flu.

“Will be back on the Campaign Trail soon!!!” Trump tweeted.

For months, the president had tried to make the race a choice election between himself and Biden, but his diagnosis ensured, again, that his two safe harbors, the economy and the Supreme Court, were cast off the stage.

Trump added to that Tuesday by suddenly announcing that he was pulling out White House representatives from congressional COVID-19 relief negotiations, blasting House Speaker Nancy Pelosi and seeming to accept the politically damaging responsibility for ending talks that were already on life support. Almost immediately, the stock market fell.

The virus cast a long shadow over the White House, where more positive cases among staff were reported Tuesday and rooms in the residence were being converted into workspaces for the president. Aides have noticed that while Trump was receiving wishes for his recovery, including from Democrats, there was little sympathy amid a sense that he had brought the virus on himself.

Trump has again played solely to his base, being the driving force behind a quick trip outside the hospital Sunday afternoon to greet fans from his armored SUV — a sojourn that energized supporters but unnecessarily jeopardized the health of the Secret Service agents guarding him. Likewise, Trump was intimately involved in the planning for his evening return to the White House, turning it into a made-for-TV moment that dominated evening newscasts.

Trump was eager to return to the campaign trail, telling aides that he wanted a series of mega rallies in Republican-friendly areas in battleground states to mark his recovery. But it remained to be seen when Trump would be cleared to set foot on Air Force One again.

The president was still contagious, and the White House doctor, Navy Cmdr. Sean Conley, said they were regularly testing Trump to determine whether he still posed a risk to others. And even once he’s no longer actively shedding the virus, Trump could still test positive for some time, putting his participation in next week’s debate in doubt despite his avowed plans to attend.

Biden said Tuesday that he and Trump “shouldn’t have a debate” as long as the president remains positive for the coronavirus.

The long-term effects of the virus on Trump’s health were not clear — White House doctors have not discussed them with the public. Nor was it clear when Trump might feel up to resuming a fuller campaign schedule. He appeared to be breathing heavily Monday evening after climbing stairs on his return to the White House.

But his aides feel that he can’t afford to be off the campaign trail for long.

“If he had his druthers, I don’t know if he would have ever gotten off the trail,” said campaign spokesperson Hogan Gidley. “He’s back, and when he’s well enough, he’ll be back on the campaign trail.”

The president has faced steady deficits in the national polls and — while smaller — in the battleground states. Aides have grown concerned about a slide in support after last week’s debate, one marked by Trump repeatedly interrupting and hectoring Biden while not offering a robust condemnation of white supremacists.

Although his campaign had felt confident about his standing in Florida, Arizona and North Carolina, he has faced stubborn deficits in Michigan and Wisconsin, putting an extraordinary emphasis on Pennsylvania, which was emerging as the potential tipping point state to give Biden or Trump the needed 270 electoral votes.

And it was in Pennsylvania where Biden on Tuesday delivered a sweeping speech, one that mentioned Trump not once but that marked the beginning of the divisive campaign’s stretch run with a call for the nation to heal.

He spoke in Gettysburg, site of the Civil War’s bloodiest battle and Abraham Lincoln’s most powerful call for unity, laying out plainly his belief that the purpose of the presidency was to bring the nation together.

“Duty and history call for presidents to provide for the common good, and I will. It won’t be easy,” Biden said. “Our divisions today are long-standing. Economic and racial inequities have shaped us for generations, but I give you my word, if I’m elected president, I will marshal the ingenuity and goodwill of this nation to turn division into unity.”

Biden had pulled down negative ads after Trump’s diagnosis but, after Trump’s return to the White House, began promoting an image of the two side by side, the Democrat wearing a mask and the Republican tearing his off.

But other Democrats have not been so reticent to go after the president. In a video released by the Biden campaign Tuesday, Michelle Obama issued a scathing rebuke of Trump’s handling of the coronavirus pandemic, accusing him of being “missing in action.”

“Seven months later, he still won’t wear a mask consistently and encourage others to do the same —even when those simple actions could save countless lives,” the former first lady said. “Instead, he continues to gaslight the American people by acting like this pandemic is not a real threat.”