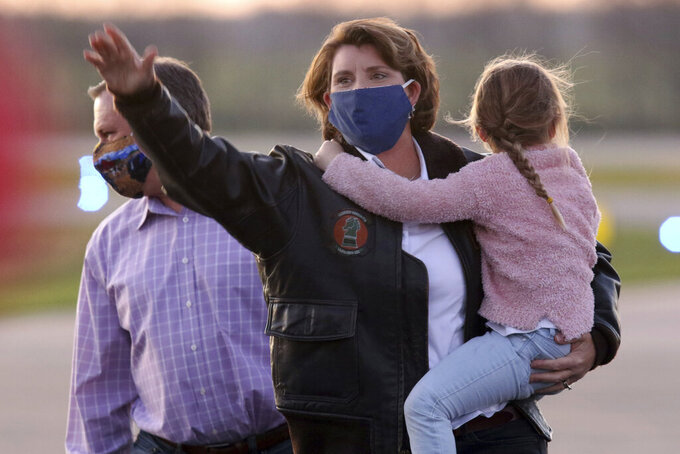 FRANKFORT, Ky. (AP) — President Donald Trump won Kentucky in his bid for reelection Tuesday, and his chief ally on Capitol Hill, Senate Majority Leader Mitch McConnell, was reelected to a seventh term in Kentucky on Election Day. In the House, Republican incumbents Andy Barr in the 6th District, Hal Rogers of the 5th District, James Comer of the 1st District, Brett Guthrie in the 2nd District and Thomas Massie of the 4th District all won reelection, as did 3rd District Democratic incumbent John Yarmuth. Voters approved a victims' rights amendment but rejected another that would have lengthened the terms of district judges and prosecutors. Robert Conley won a seat on the Supreme Court.

Republican President Donald Trump defeated Democratic former Vice President Joe Biden to carry Kentucky, a state where the GOP has dominated federal elections for more than 20 years. That includes the last presidential election, when Trump carried Kentucky by 30 percentage points. The last Democrat to carry Kentucky was Bill Clinton in 1996. Neither candidate campaigned in Kentucky, instead focusing on swing states elsewhere.

Republican Senate Majority Leader Mitch McConnell defeated Democrat Amy McGrath, a retired Marine combat pilot, to cap a bruising, mega-spending campaign in Kentucky. McConnell touted his leadership post and close ties to Trump as a political asset for Kentucky as he sought a seventh term. McGrath ran as a political outsider and supports term limits for senators. She described McConnell’s decades-long Senate career as a symptom of what ails American politics.

Republicans maintained their overwhelming majorities in Kentucky’s legislature with a dominant showing in rural districts. Democrats fell short in some of the suburban districts where they hoped to make some inroads. The outcome means Democratic Gov. Andy Beshear will be dealing once again with a predominantly GOP legislature. Lawmakers have a challenging 30-day session next year that will include writing a new state budget and dealing with the economic fallout from the coronavirus pandemic. President Donald Trump and Senate Majority Leader Mitch McConnell dominated at the top of Kentucky’s ticket, and that helped Republican candidates up and down the ballot.

Circuit Judge Robert Conley won a seat on the Supreme Court representing an eastern Kentucky district. Conley defeated Kentucky lawmaker Chris Harris. Conley hears cases as a circuit judge in Greenup and Lewis counties. He was recently reprimanded by the state’s Judicial Conduct Commission, in part for throwing a man in jail for three days for contempt of court without conducting a hearing. Harris, a Democrat, has represented Martin County and part of Pike County in the House since 2015. As an attorney he has argued cases in state and federal courtrooms across the state.

Voters approved one amendment, known as Marsy’s law, to add a series of crime victims’ rights to Kentucky’s Constitution. The measure was a reprise of a 2018 constitutional amendment that cleared the legislature and was approved by Kentucky voters, but was voided when the Kentucky Supreme Court ruled that the wording was too vague. It's worded differently this time but would have similar effects. It guarantees, among other things, that crime victims have the right to timely notification of court proceedings. Voters rejected another amendment, which would have lengthened the terms of district judges and state prosecutors. It called for district judges, who currently serve four-year terms, to start serving eight-year terms in 2022. It also would have increased the time they have to be a licensed attorney before becoming a judge. In addition, the amendment would have added two years to the term of a commonwealth’s attorney.