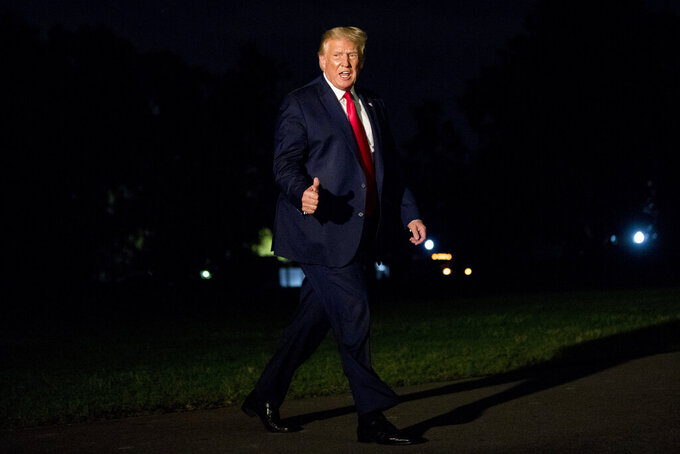 President Donald Trump gives a thumbs-up to members of the media as he walks across the South Lawn as he arrives at the White House in Washington, Sunday, Aug. 9, 2020, after returning from Morristown, N.J. (AP Photo/Andrew Harnik)

WASHINGTON (AP) — President Donald Trump said Monday that his acceptance speech for the Republican presidential nomination will be held at either the White House or the Gettysburg battlefield, as he searches for a symbolic substitute for his virus-scuttled plans for an arena celebration.

The president's initial hopes for the event to be a four-day infomercial for his reelection bid have been steadily constrained by the coronavirus pandemic, culminating in his decision last month to cancel nearly all of the in-person proceeding. In recent weeks, Trump and his aides have looked for alternatives that would allow him to recreate at least some of the pomp of the event.

“We have narrowed the Presidential Nomination Acceptance Speech, to be delivered on the final night of the Convention (Thursday), to two locations - The Great Battlefield of Gettysburg, Pennsylvania, and the White House, Washington, D.C.,” Trump tweeted Monday.

He added that a decision on the location of the Aug. 27 speech will be made soon.

Both sites are federal property, raising legal and ethical issues for their use in a political event. The president is not covered by the Hatch Act, which prohibits political activity by nearly all federal employees, though White House and other federal officials supporting the event are.

The Civil War battlefield in Pennsylvania could also resurface the president’s repeated defense of monuments to heroes of the Confederacy.

Trump has previously turned to national parks and monuments to hold politically tinged events, including a July 4 event on the National Mall in 2019 and one at Mount Rushmore in South Dakota just last month. In May, he gave an interview to Fox News inside the Lincoln Memorial, a move that required special dispensation from his appointed secretary of the Interior, David Bernhardt.

Staging a convention speech at Gettysburg, though, would go a step further, and raise questions about politicizing the site of the deadliest battle of the Civil War.

Trump has spoken openly of his fondness for President Abraham Lincoln, whose short address dedicating the national cemetery for Union soldiers in 1863 crystallized the cause for which they died fighting. But Trump has repeatedly courted controversy in office in opposing efforts to remove displays of the Confederate battle flag and failing to resoundingly condemn white supremacists.

The Republican National Convention was initially slated for Charlotte, North Carolina, before Trump moved it to Jacksonville, Florida, in June, in hopes the Republican-led state would be more amenable to his aim of having thousands of mask-less supporters cheering his renomination. But as a wave of new coronavirus cases swept the Sun Belt, Trump was forced to cancel those proceedings last month.

Now almost the entirety of the convention will be conducted virtually, except for a formal renomination vote on Aug. 24 in Charlotte by just a few hundred delegates casting proxy votes for those unable to assemble in person.