Trump golfs in Florida as COVID relief hangs in the balance 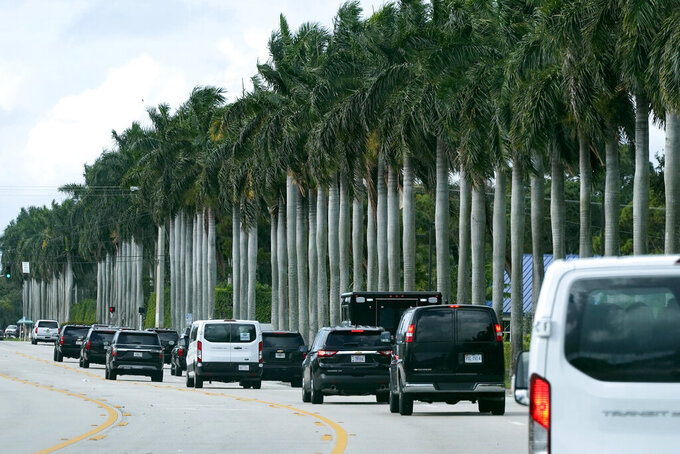 Trump, at his Mar-a-Lago club in Palm Beach for the holidays, had no events on his public schedule after throwing the future of a massive COVID relief and government funding bill into question. Failure to sign the bill, which arrived in Florida on Thursday night, could deny relief checks to millions of Americans on the brink and force a government shutdown in the midst of the pandemic.

The White House declined to share details of the president’s schedule, though he played golf Friday with South Carolina Sen. Lindsey Graham, a close ally.

White House spokesman Judd Deere said Trump was briefed on the explosion in downtown Nashville early Friday that authorities said appeared to be intentional, but the president said nothing publicly about it in the hours after.

Trump tweeted that he planned to make “a short speech to service members from all over the world” by video conference Friday to celebrate the holiday, but declared: “Fake News not invited!” Without giving details, the White House said only that Trump would work “tirelessly” during the holidays and has “many meetings and calls.”

Trump’s vacation came as Washington was still reeling over his surprise, eleventh-hour demand that an end-of-year spending bill that congressional leaders spent months negotiating give most Americans $2,000 COVID relief checks — far more than the $600 members of his own party had agreed to. The idea was swiftly rejected by House Republicans during a rare Christmas Eve session, leaving the proposal in limbo.

The bipartisan compromise had been considered a done deal and had won sweeping approval in the House and Senate this week after the White House assured GOP leaders that Trump supported it. If he refuses to sign the deal, which is attached to a $1.4 trillion government funding bill, it will force a federal government shutdown, in addition to delaying aid checks and halting unemployment benefits and eviction protections in the most dire stretch of the pandemic.

“Made many calls and had meetings at Trump International in Palm Beach, Florida. Why would politicians not want to give people $2000, rather than only $600?" he tweeted after leaving the golf course Friday afternoon. “It wasn’t their fault, it was China. Give our people the money!”

Graham tweeted Friday night that Trump was still intent on getting changes in yearend legislation before signing it.

“After spending some time with President @realDonaldTrump today, I am convinced he is more determined than ever to increase stimulus payments to $2000 per person and challenge Section 230 big tech liability protection." he said in his tweet “Both are reasonable demands, and I hope Congress is listening. The biggest winner would be the American people.”

In addition to the COVID aid, Graham was referring to another Trump priority: to get a repeal of Section 230 of the 1996 Communications Decency Act, a law that protects online platforms from liability for content posted by users.

Trump’s decision to attack the COVID bill has been seen, at least in part, as political punishment for what he considers insufficient backing by congressional Republicans of his campaign to overturn the results of the Nov. 3 election with unfounded claims of voter fraud.

“At a meeting in Florida today, everyone was asking why aren’t the Republicans up in arms & fighting over the fact that the Democrats stole the rigged presidential election?” Trump tweeted Thursday.

“I will NEVER FORGET!” he later added.

Trump for weeks now has refused to accept the results of the election and has been pushing new, increasingly outrageous schemes to try to overturn the results. He has been egged on by allies like his lawyer, former New York mayor Rudy Giuliani, who accompanied the president to Florida aboard Air Force One.

Trump has provided no credible evidence to support his election claims, which have been refuted by a long list of officials, among them judges, former Attorney General William Barr, Republican governors and local election administrators.

Meanwhile, the nation continues to reel as the coronavirus spreads, with record infections and hospitalizations and more than 327,000 now dead. And millions are now going through the holidays alone or struggling to make ends meet without adequate income, food or shelter thanks to the pandemic’s economic toll.

The Justice Department said Acting Attorney General Jeff Rosen also was briefed on the Nashville blast and directed that all department resources be made available to help. The FBI will be taking the lead in the investigation, agency spokesman Joel Siskovic said.

Three people were treated in hospitals after a recreational vehicle, blaring a recorded warning of an imminent detonation, exploded in Nashville's downtown. The blast caused widespread communications outages that took down police emergency systems and grounded flights at the city’s airport.

To mark the holiday, the president and first lady Melania Trump tweeted out a pre-recorded video message in which they wished Americans a merry Christmas and thanked first responders and members of the military.

“As you know, this Christmas is different than years past,” said Mrs. Trump, who focused on the acts of “kindness and courage” the pandemic had inspired .

Trump hailed the vaccine doses now being delivered and thanked those responsible. “It is a truly a Christmas miracle,” he said.

Meanwhile, Democratic House Speaker Nancy Pelosi and Treasury Secretary Steven Mnuchin have been trying to salvage the year-end legislation to try to prevent a shutdown. Democrats will call House lawmakers back to Washington for a vote Monday on Trump’s $2,000 proposal, though it would probably die in the Republican-controlled Senate. They are also considering a vote Monday on a stop-gap measure at least to avert a federal shutdown and keep the government running until Democrat Joe Biden is inaugurated Jan. 20.

In addition to the relief checks, the COVID bill that passed would establish a temporary $300 per week supplemental jobless benefit, provide a new round of subsidies for hard-hit businesses, restaurants and theaters and money for schools, and provide money for health care providers and to help with COVID vaccine distribution.