Trump noticeably absent from key US Senate race in Montana 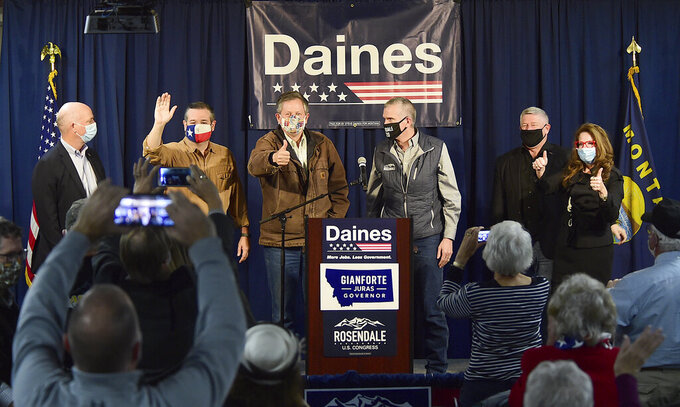 BILLINGS, Mont. (AP) — As Republican leaders fearful of losing the majority in the U.S. Senate parade through Montana to rally behind embattled incumbent Steve Daines, one has been conspicuously absent: President Donald Trump.

The president visited Montana repeatedly in 2018 and hosted huge rallies in a failed bid to oust the state’s senior senator, Democrat Jon Tester. The 2020 election was lining up to be a potential replay when Trump in June suggested he would return to Montana and “be there to help Steve win big” over his challenger, Democratic Gov. Steve Bullock.

But that went by the wayside with Trump playing defense against Democrat Joe Biden in several battleground states and after a coronavirus infection temporarily sidelined the president during the homestretch of the campaign.

It left Daines, whose campaign has leaned on his ties to Trump, to settle for an 8-1/2 minute “tele-rally” with the president in October — essentially a conference call for supporters and reporters in which no questions were taken.

Democrats have far outspent the Republicans in the race that's been one of the most expensive in the country, with Bullock's side spending $82 million and Daines' $63 million on television, radio and digital ads, according to data from the ad-tracking firm Kantar/CMAG.

That's not the same as having President Trump, who wasn't on the ballot in 2018, said Jeremy Johnson, a political analyst at Carroll College in Helena.

“Everybody put together does not equal Trump,” Johnson said. “Trump’s the big draw. He’s the one who the press follows ... He is prioritizing his election to the presidency over everybody else.”

Bullock, a two-term governor and former Montana attorney general, has avoided direct confrontations with Trump. He entered the Senate race in March under pressure from fellow Democrats and after dropping a long-shot bid for the party's presidential nomination. After veering to the political left during that bid, he's focused his Senate campaign on health care and public land protections and says he would be a uniting figure in Washington.

Bullock hasn't brought in many well-known Democrats to campaign with him and claims independence from party leaders.

Trump won Montana by 20 percentage points in 2016 and Daines has emerged as a close ally. The first-term lawmaker and former corporate executive backed the president’s tax cuts and immigration policies, defended Trump during his impeachment trial and switched from booster on U.S.-China relations to ardent China critic after Trump blamed Beijing for the pandemic.

There are signs Trump’s support in Montana has slipped in the past four years including Tester’s 2018 reelection, which came after Trump held four large rallies on behalf of the Republican challenger, state auditor Matt Rosendale. It was a record number of visits to Montana by a sitting president.

Johnson said “there are real limits" on how much Trump's presence could boost Daines. Electrifying voters with a boisterous rally doesn’t translate into gains if they were headed to the polls regardless.

Pence visiting in September drew several hundred people — far short of the thousands at the Trump rallies that were a central feature of the 2018 Montana election. Most other GOP luminaries drew even smaller crowds, with Cruz and Daines speaking to about 50 supporters during a Thursday event in Billings and not taking questions.

Bullock campaign adviser Olivia Bercow said Daines was closing out the campaign stumping with “out of state, out of touch politicians.”

“Steve Daines is really fighting for the Washington status quo and Steve Bullock is fighting for every Montanan,” Bercow said.

A spokesperson for Daines said his candidacy had generated enthusiasm across the state but did not directly answer questions about Trump's absence.

“Montanans are going to vote strongly to reelect President Trump and Sen. Daines on Tuesday because they have delivered time and time again for the people of Montana," spokeswoman Julia Doyle said.