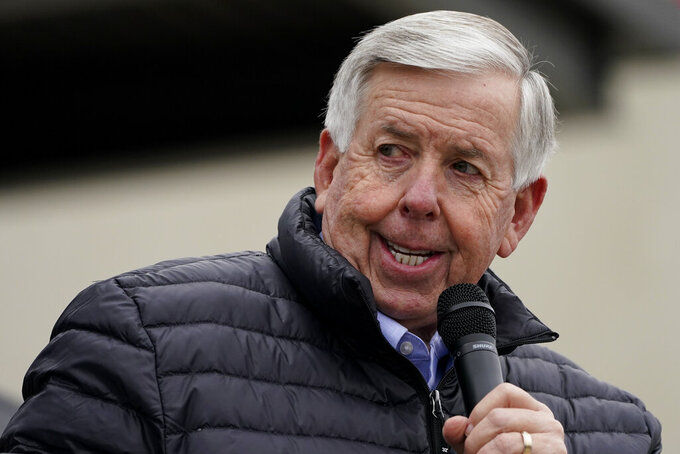 Parson's win is at least partially a referendum on his hands-off approach to the coronavirus, which has been surging in Missouri for months. Missourians also supported the re-election bid of Republican President Donald Trump, who like Parson has opposed things such as mask mandates.

It was the first run for governor for both candidates. Parson, a former sheriff who was elected lieutenant governor in 2016, moved into the top job two years ago after former Republican Gov. Eric Greitens resigned in the face of possible impeachment amid multiple scandals.

Galloway’s pitch to voters was that Parson mangled his handling of the pandemic and that she would do better, including by requiring people to wear face masks. Parson, who has resisted imposing virus restrictions and instead left it to individuals to act responsibly to prevent the spread of the disease, has insisted that the state is managing the virus well and campaigned on his record in support of law enforcement.

Here’s a look at the top issues and candidates in Missouri’s election:

Missouri lawmakers passed a law allowing anyone to vote by mail this year because of the pandemic, as long as they got their ballots notarized. As of Sunday, about 828,000 Missouri voters had cast early in-person or mail-in ballots. That’s nearly three times as many as were counted in the last presidential election.

Elections officials were predicting a 75% voter turnout rate this election, which would be Missouri's highest since 1992, when 78% of registered voters cast ballots in an election won by Democrat Bill Clinton.

Missouri voters have passed a new redistricting measure that will override redistricting changes they adopted just two years ago. The 2018 “Clean Missouri” initiative required state House and Senate districts to be drawn to achieve “partisan fairness” and made Missouri the first state to adopt a specific formula known as the “efficiency gap” to measure fairness. The Republican-led Legislature put an alternative proposal on the ballot to drop partisan fairness and competitiveness to the bottom of the priority list for redistricting. It also abolishes the newly created position of a nonpartisan demographer to draft districts and instead makes a pair of bipartisan commissions responsible for that task, as they had been in the past.

Missouri voters have rejected a ballot measure that would have limited the lieutenant governor, secretary of state, attorney general and state auditor to two four-year terms in office. Currently, only the governor and treasurer are restricted to eight years in office.

Republican Secretary of State Jay Ashcroft has won a second four-year term in office by staving off Democrat Yinka Faleti, a 44-year-old Army veteran who previously worked as executive director of the St. Louis-area racial equity group Forward through Ferguson. Ashcroft has supported requiring voters to show photo identification at the polls. Faleti criticized Ashcroft’s handling of elections during the pandemic.

Republican Attorney General Eric Schmitt has won election to a full term. The governor appointed Schmitt attorney general in 2018 to replace former Attorney General Josh Hawley, who left office two years into his term to join the U.S. Senate. Schmitt had been serving as the state treasurer and previously was elected to the state Senate. Democrat Rich Finneran, a 36-year-old former assistant U.S. attorney for the Eastern District of Missouri, ran against him.

Voters have elected Republican Scott Fitzpatrick to a full term as state treasurer. Parson appointed Fitzpatrick to succeed Schmitt as treasurer after Schmitt left for the Attorney General’s Office in 2018. Fitzpatrick at the time was leading the budget committee in the state House. Democrat Vicki Lorenz Englund, a 46-year-old former state representative, campaigned to unseat him.