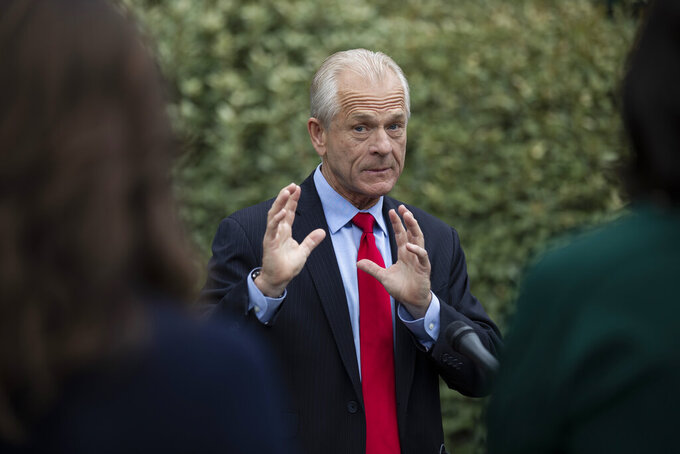 WASHINGTON (AP) — President Donald Trump is tweeting that an initial trade agreement with China is still on after a top White House adviser's comments seemed to suggest it was over, spooking markets late Monday.

Trump tweeted: “The China Trade Deal is fully intact. Hopefully they will continue to live up to the terms of the Agreement!"

The Trump administration has been extremely critical of China's efforts to contain the novel coronavirus early on and the president repeatedly blames China for the pandemic in his remarks, leading to questions about future cooperation in areas such as trade.

Peter Navarro, director of trade and manufacturing policy at the White House, told Fox News “it’s over," when asked a question that was focused on the China trade deal.

“(Trump) obviously really wanted to hang onto this trade deal as much as possible. And he wanted them to make good on the promises, because there had been progress made on that trade deal, but given everything that’s happened and all the things you just listed, is that over?" Navarro was asked.

“It's over, yes," Navarro replied.

But when contacted by The Associated Press, Navarro said his comments had been taken out of context and had nothing to do with the deal.

“I was simply speaking to the lack of trust we now have of the Chinese Communist Party after they lied about the origins of the China virus and foisted a pandemic upon the world," said Navarro, a longtime critic of the Asian country.

United States Trade Representative Robert Lighthizer testified on Capitol Hill last week that he is confident China will live up to its purchase commitments even though its economy has been weakened by the coronavirus pandemic and the lockdowns and travel restrictions imposed to contain it.