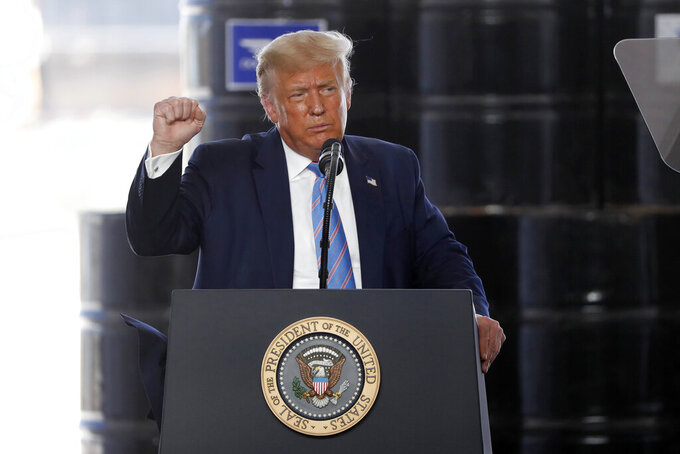 ODESSA, Texas (AP) — President Donald Trump took sweeping digs at “crazy left radical Democrats” on a fundraising trip Wednesday to the fracking fields of West Texas, launching unsubstantiated claims that a Democratic administration would destroy everything from the country's suburbs to the U.S. energy industry.

Trump, speaking in front of stacked metal oil barrels, also played down the financial difficulties of the oil and gas industry in Texas and elsewhere, still struggling with the pandemic lockdown and global oversupply that briefly drove oil prices into negative territory this spring. Prices have rebounded to around $40 a barrel, still below what some producers here need to break even.

“We’re OK now. We’re back, we’re back,” Trump said to a crowd scattered with people wearing cowboy hats and face masks. He sought to contrast his support for oil and gas with Democratic rival Joe Biden's climate-friendly energy plan, though Biden himself has stopped short of calling for a ban on hydraulic fracturing, or fracking, the production method that spurred U.S. oil and gas to a yearslong boom that started under President Barack Obama.

"If they got in, you would have no more energy coming out of the great state of Texas,'' warned Trump, whose poll numbers in the 2020 election are lagging. He claimed the same, without evidence, for Ohio and Pennsylvania, two fracking states that also are battlegrounds in the presidential race.

Speaking under a tent to supporters on a hot, windy day, Trump alluded to the opposing party in the most extreme terms, saying a Democratic White House win and the policies of the “Washington crazy left radical Democrats" would mean “the death of American prosperity. It would destroy our country.”

Trump also praised a step he took last week to rescind an Obama-era fair housing rule undoing a prior administration effort for low-income families that had Trump tweeting warnings to what he called the “Suburban Housewives of America.” “It's been hell for suburbia,” he said.

“They want to uproot and demolish every American value. They want to wipe away every trace of religion from national life. They want to indoctrinate our children, defund our police, abolish the suburbs, incite riots and leave every city at the mercy of the radical left," Trump declared.

Trump was combining campaigning and fundraising with his first trip to an oil and gas rig and his first visit as president to the Permian Basin. He was pulling in up to $100,000 per person at a roundtable with supporters and was expected to raise about $7 million total.

His loyal donors and supporters in the oil and gas industry are dealing with the state's fierce coronavirus outbreak and the boom-turned-bust of oil and gas.

Texas, over the past month, has experienced a dramatic spike in newly confirmed coronavirus cases, hospitalizations and fatalities. The state became one of the nation's hot spots as Texas politicians debated masks and other measures.

Even as Air Force One carried Trump to Texas on Wednesday, the U.S. Energy Information Administration reported American petroleum use plummeted to a nearly 40-year low this spring, owing to the pandemic lockdown and market oversupply, partly because of intensive oil and gas production that Trump encouraged. Oil and gas prices and production have picked up somewhat since, but it's still a tough time in U.S. oilfields.

Trump’s government has exerted itself for the oil and gas industry at least as hard as it has for any other sector. That includes rolling back environmental and public health protections while promoting a technology-driven surge in U.S. oil and gas production — begun under Obama — as part of what Trump describes as an American march to global energy dominance.

His administration has moved to open up vast wilderness areas to oil and gas interests over the objections of environmental groups. Trump also has sought to override various regional objections to oil and gas pipelines with executive orders.

And next month, the administration is expected to announce its latest effort to block regulation of the industry’s emissions of methane, a potent agent of climate change. West Texas environmental activists say the methane emissions are part of a too-little-regulated industry’s assault on the air, water and public health in the region’s yearslong expansion of oil and gas production. Successful legal challenges stopped the administration's earlier attempts.

When flying at night into the West Texas city of Odessa, among the areas Trump visited, “it looks like a huge birthday cake, there are so many flares out here” from facilities burning off methane as an oil and gas byproduct, said the Rev. Gene Collins, an activist demanding more regulation of what environmental groups and satellite data-gathering depict as surging methane emissions in the Permian Basin.

Texas oil country has long been a reliable well of fundraising for Republican presidents. But this year, the state may be a battleground.

For years, Democrats have been watching Texas demographics — with growing populations of Latinos, young people and ex-Californians — and pining for the election cycle when it would be in play.

Although Trump won the state comfortably in 2016, former Democratic Rep. Beto O’Rourke gave Republican Sen. Ted Cruz a scare two years ago, and Democrats have used that race to try to build an organization that could swing the state blue. Sensing an opportunity, Biden has begun airing advertisements in Texas as coronavirus cases surge there.

Losing Texas, Republicans fear, would upend their party’s ability to obtain the needed 270 electoral votes to capture the White House. Though privately Trump campaign officials concede the need to spend time and money in Texas, assets they would prefer to spend elsewhere, they remain confident they can retain the state and have expressed hope that Democrats will waste resources trying to obtain a prize that is out of reach.

But the president does have plans to frequently visit Texas. Trump’s Wednesday visit allowed him to raise needed money — Biden has cut into the president’s fundraising advantage — and showcase both his administration’s deregulation agenda and its attempts to get the economy roaring again.