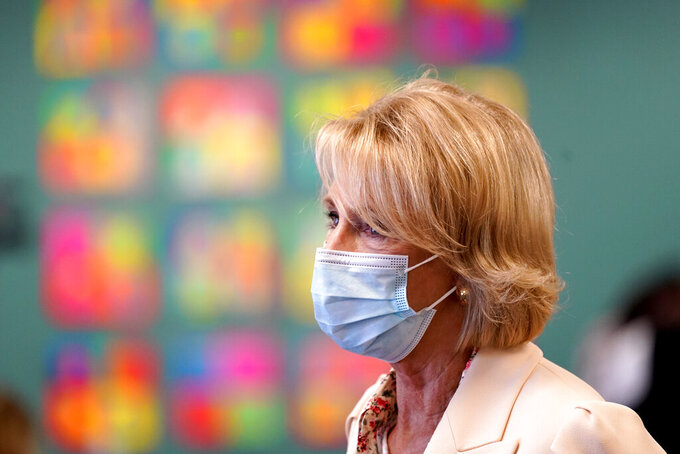 WASHINGTON (AP) — Education Secretary Betsy DeVos planned a “Moms for Trump” rally in her home state of Michigan. The Department of Homeland Security's top official was in Texas to celebrate completion of a section of the U.S.-Mexico border wall. The chief of the Environmental Protection Agency headed to North Carolina after visiting Georgia the day before.

That was just Thursday.

Members of President Donald Trump’s Cabinet are logging extra miles as mostly unofficial campaign surrogates in crucial states in the final days before Tuesday's election, blending politics and policy in ways that critics say skirt established norms and may even violate the law.

It's long been one of the benefits of incumbency that a president can enlist his Cabinet to promote administration accomplishments. But only to a point, with a law on the books since 1939 requiring a division between political and official activities for all federal employees except the president and vice president.

“The Trump administration has completely obliterated that line," said Austin Evers, executive director of American Oversight, which describes itself as a nonpartisan watchdog organization. "The White House is now the seat of government, where the president lives, and one of his chief campaign props. And that erosion of norms has spread throughout the entire administration.”

This criticism isn't new, but it's intensified in recent months. The administration, which came under fire for using the White House as a backdrop for the president’s acceptance speech at the Republican National Convention, insists it is adhering to the law known as the Hatch Act.

“The Trump administration takes the Hatch Act seriously and all events are conducted in compliance with the law,” White House spokesman Judd Deere said.

But already, at least one member of the administration has run afoul of the decades-old law in recent weeks.

The Office of Special Counsel, led by a Trump appointee, concluded this month that Agriculture Secretary Sonny Perdue violated the law at a North Carolina event in August where his remarks in support of the president devolved into crowd chants of “four more years.” Perdue was ordered to reimburse the government for costs associated with the trip.

“He turned an official event into a campaign one,” by tying aid to farmers to reelecting Trump, said Jordan Libowitz, communications director for Citizens for Responsibility and Ethics in Washington, which filed complaint with that federal office over Perdue's appearance.

Secretary of State Mike Pompeo could be next.

Two New York Democrats, Reps. Eliot L. Engel and Rep. Nita Lowey, said this week that the same office was investigating the speech that America's top diplomat made to the GOP convention from Israel. The office declined comment and the State Department noted that a previous Hatch Act complaint against Pompeo was dismissed.

That Pompeo speech was among a number of appearances, including one in September in Wisconsin, that appeared to many observers to cast aside a long tradition of avoiding partisan politics by secretaries of state. But he's hardly alone, and the examples have proliferated in recent days.

Energy Secretary Dan Brouillette this week was visiting southwestern Pennsylvania -- a swing area in one of the most important battleground states -- for at least the third time since August. In an area closely tied to fracking, Brouillette didn’t mention Democratic presidential nominee Joe Biden by name but warned that efforts to develop renewable energy to address climate change could threaten “every form of energy besides renewables.”

Environmental Protection Agency chief Andrew Wheeler has made repeated trips to closely contested Michigan, including one to announce $2 million in grant funding, where he criticized the Obama administration's response to the lead contamination crisis in Flint.

DeVos has made frequent visits to pivotal states such as Florida, Texas and Wisconsin, for discussions of efforts to reopen schools closed by the coronavirus pandemic and to promote school choice, an issue that Trump has focused on in hopes of appealing to Black voters. The announcement of her appearance at Thursday's “Moms for Trump” rally in Detroit referred to her as the “Honorable Betsy DeVos," not as education secretary for a clearly political event.

Acting Homeland Security Secretary Chad Wolf was in South Texas to mark completion of 400 miles of border wall, one of the central themes of the Trump 2016 campaign. Wolf also has drawn scrutiny by holding news conferences in Pennsylvania and elsewhere to announce relatively minor immigration operations. American Oversight, in a letter Thursday, urged the Office of Special Counsel to investigate Wolf and other DHS officials.

Veterans Affairs Secretary Robert Wilkie has traveled to a host of presidential and Senate battleground states in recent months, mixing in dedication ceremonies and other official business with a “fireside chat” and praise of vulnerable GOP incumbents. His activity has received criticism from congressional Democrats.

Other examples include national security adviser Robert O'Brien traveling to Minnesota and Wisconsin this month to discuss trade; senior Trump adviser Stephen Miller holding a conference call Wednesday with reporters and speaking “in his personal capacity” to discuss immigration policy; and Kayleigh McEnany doing double duty as White House press secretary and “Trump 2020 campaign adviser," as she was described in an appearance on “Fox & Friends” on Thursday.

Hatch Act violations can be referred to the Justice Department for a criminal investigation, but more typically result in administrative penalties. Evers, a former litigator and government lawyer, said lower-level staff should be concerned about the possible legal consequences of working on barely concealed political missions.

There could be electoral consequences as well. “The political calculation that go into these decisions could be very wrong," he said. “It should matter to the public that their apolitical government is being used for purely partisan ends. So it may not have the payoff they expect.”