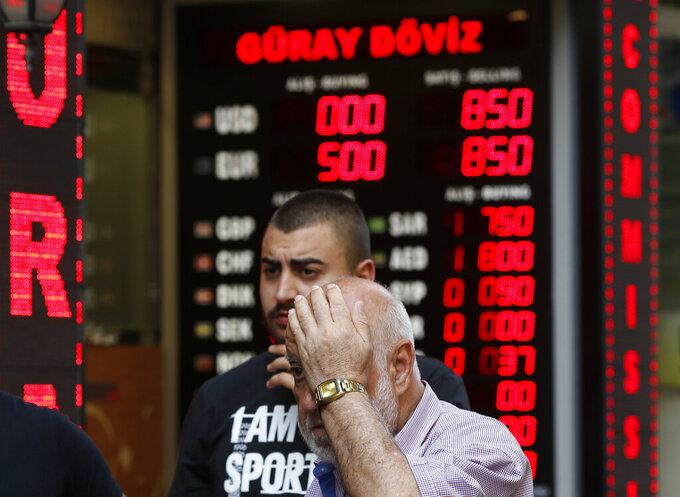 FILE-In this Thursday, Aug. 16, 2018 file photo, a man walks away after changing currency at a currency exchange shop in Istanbul. Turkey's currency dropped to an all-time low against the dollar on Thursday Aug. 6, 2020, as the global recession created by the coronavirus pandemic brings to the fore weaknesses in the country's economy. (AP Photo/Lefteris Pitarakis, File)

LONDON (AP) — Turkey’s currency dropped to an all-time low against the dollar on Thursday as the global recession created by the pandemic brings to the fore weaknesses in the country's economy.

The Turkish lira fell to 7.2775 against the dollar before recovering slightly to around 7.24, compared with the previous record low of 7.26 in May.

The drop is in part fueled by high inflation, a wide current account deficit and the government’s push for cheap credit to drive the economy that was already fragile before the COVID-19 pandemic.

Turkey has been hoping for an influx of foreign currency through exports and especially through tourism but numbers are still low amid the coronavirus pandemic.

Unorthodox policies including Turkish President Recep Tayyip Erdogan’s aversion to high interest rates, coupled with concern over the level of Turkey’s reserves, are thought to have pushed foreign capital out.

Analysts also noted rising tensions with the European Union as a risk. Turkey faces the threat of EU sanctions over its plans to drill for natural resources in the Eastern Mediterranean and the reconversion of the Hagia Sophia last month has further strained relations.

“If tensions with the EU continue to escalate, sharper falls lie in store,” Jason Tuvey from Capital Economics said in a client note.

The country endured a currency crisis in August 2018, when the lira fell to 7.24 per dollar, at a time of political tensions with the United States.