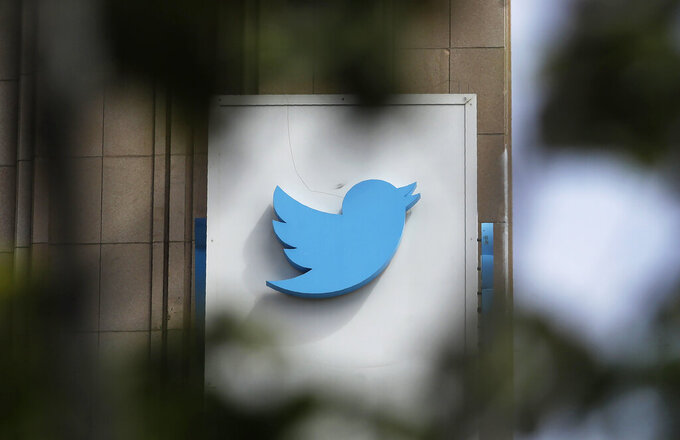 FILE - This July 9, 2019, file photo shows a sign outside of the Twitter office building in San Francisco. Twitter posted solid results for the last three months of 2020, capping what CEO Jack Dorsey called “an extraordinary year” for the platform. (AP Photo/Jeff Chiu, File)

Twitter posted solid results for the last three months of 2020, capping what CEO Jack Dorsey called “an extraordinary year" for the platform. New users signed on in large numbers to follow the world's events in real time despite the challenges of election misinformation and intensifying calls to ban now former President Donald Trump.

Revenue grew 28% to $1.29 billion from $1 billion. Analysts, on average, were expecting earnings of 29 cents per share and revenue of $1.18 billion, according to a poll by FactSet.

EMarketer analyst Nazmul Islam said Twitter might see some of user growth fall off in the current quarter due to its removal of accounts and defections from people who oppose the account bans. But he added that advertising revenue should remain strong as the company continues to invest in ad infrastructure.

Twitter said it expects 2021 revenue to grow faster than expenses — meaning it would turn a profit — but did not give more specific guidance. And that's assuming the coronavirus pandemic continues to improve and the company sees a “modest" effect from new privacy changes associated with Apple's iOS 14.

Apple is preparing to roll out a new privacy control in the early spring to prevent iPhone apps from secretly shadowing people, which could hurt companies that rely on tracking people to show personalized advertisements — like Facebook and Twitter.