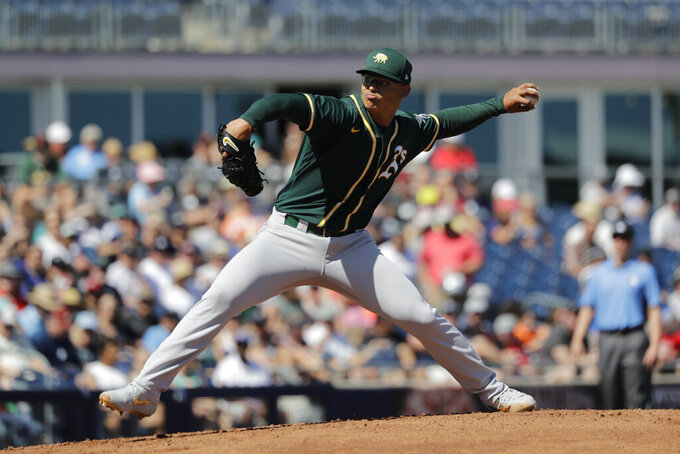 FILE - In this May 7, 2020, file photo, Oakland Athletics starting pitcher Jesus Luzardo throws against the Seattle Mariners during a spring training baseball game in Peoria, Ariz. Luzardo broke into the majors in September, striking out 16 in 12 innings and recording two saves in six relief appearances. But the A’s think his future is in their rotation. (AP Photo/Elaine Thompson, File)

OAKLAND, Calif. (AP) — Jesus Luzardo's family and friends are all feeling well, and the Oakland pitcher never experienced any symptoms despite a positive coronavirus test that delayed his arrival with the Athletics.

The prized left-handed prospect finally rejoined the A's on Friday and got right to work with a bullpen session of about 30 pitches before he throws to hitters Monday if all stays on schedule.

“It was amazing. It was probably the best day of 2020 for me by far," Luzardo said after his workout at the Oakland Coliseum. “I was going crazy locked up in a room, so being able to get back out here, be back in the Coliseum, be around the guys, it was a lot of fun. ... Baseball for me is an escape."

Luzardo said his positive result from intake testing before the start of camp July 4 came as a surprise because he was careful and taking precautions. He is thankful he wasn't symptomatic and that nobody close to him became infected.

“That's why I kind of was taken off guard because everyone back home, everyone I worked out with, trained with, family, whoever I stayed with, whatever it was, everyone was negative,” Luzardo said. “When I came out positive it was just kind of crazy to me.”

Given he is two weeks behind, Luzardo is expected to begin the shortened 60-game season coming out of the bullpen until his arm is built up to start and throw at least three innings, while Chris Bassitt will likely be in the rotation initially.

“Based on the fact he actually has been throwing we feel like if all goes well here the potential for him to be on the team right away is still there,” manager Bob Melvin said.

The 22-year-old Luzardo returned from strains to his rotator cuff and lat to make six appearances with a 1.50 ERA and a pair of saves over 12 innings late in 2019, when the A's lost the AL wild card for a second straight year.

“I think it's huge actually for me. The experience I gained last year coming out of the bullpen, I threw one inning, I threw three innings, so I kind of did a little bit of everything,” he said. “I think that's going to help me a lot, especially early in this year if I'm not in the rotation. I don't know what the plan is yet. Whatever comes my way I'm sure we'll figure it out.”

Right-hander Mike Fiers worked out with Luzardo during the offseason and quarantine period and also was kept off the field for the first couple of workouts earlier this month.

Even while self-isolating, Luzardo pushed himself any way he could with a throwing regimen — because the video games and Netflix programs got old fast.

“It was more in my mind I'm ready to get back out there whenever I test negative,” he said. “I feel good now. I'm ready for whatever they ask me to do.”