Tyler Herro out of virus protocols, cleared to play for Heat 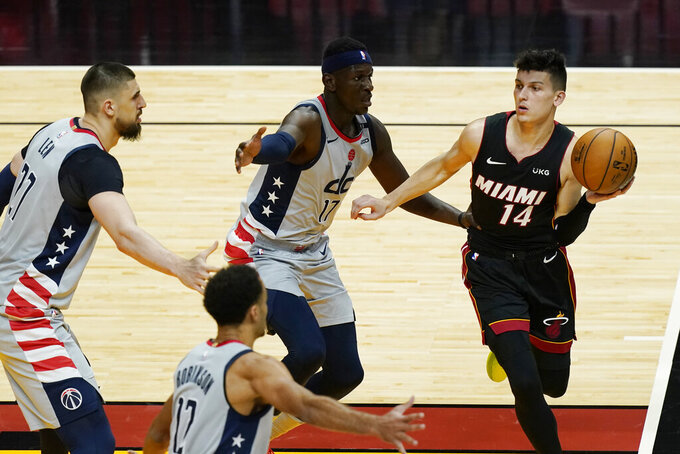 MIAMI (AP) — Tyler Herro was cleared Friday to resume basketball activities with the Miami Heat after missing one game while dealing with the NBA’s health and safety coronavirus protocols.

The second-year guard was flagged after a test result Thursday, then cleared after returning subsequent negative tests. Herro was not permitted to play in Miami’s win over Houston on Thursday night while the matter was sorted out. He then was able to join the team for its flight to Salt Lake City after the game.

The reigning Eastern Conference champion Heat, winners of a season-best four straight, play Utah on Saturday night. The Jazz entered Friday with the NBA’s best record; they were to play Milwaukee at home Friday night.

Heat coach Erik Spoelstra said he learned Herro would not be available for Thursday’s game “17 seconds before I was going to speak to the team” pregame. Max Strus got the bulk of what would have been Herro’s minutes, scoring a career-high 21 points and helping Miami beat the Rockets 101-94.

Herro was tested again Friday morning, part of the usual player routine this season. The Heat announced a few hours later he’s no longer dealing with the protocols.

Miami has had 10 of its 17 players miss at least one game this season for virus-related reasons. Jimmy Butler missed a team-high 10 games, Avery Bradley missed eight games and later revealed he tested positive for COVID-19, Kendrick Nunn missed one game because a test result was delayed, and Bam Adebayo, Goran Dragic, Moe Harkless, Udonis Haslem, KZ Okpala and now Herro have missed because of various reasons related to the protocols.

Injuries have also been an issue, part of the reason why Miami has used 16 starting lineups through 25 games. Dragic and Bradley, both rotation players, are not with the Heat on their seven-game trip right now because of injuries. Dragic has a sprained ankle and Bradley a strained calf.

“Look, we’ve been dealing with this for five weeks,” Spoelstra said. “Everybody has this twisted about this team, saying that there’s a lack of whatever. Whatever the narrative, stupid narrative that’s out there, we have incredible mental toughness and stability in that locker room and as a staff because we’ve been dealing with it. We’re not making any excuses for it. This has been going on for five weeks. Guys have been able to stay focused on the task at hand.”

Herro, who missed seven games earlier this season with neck spasms, has averaged 17 points in his 17 games this season.