U. of Illinois official to be next U. of Iowa president 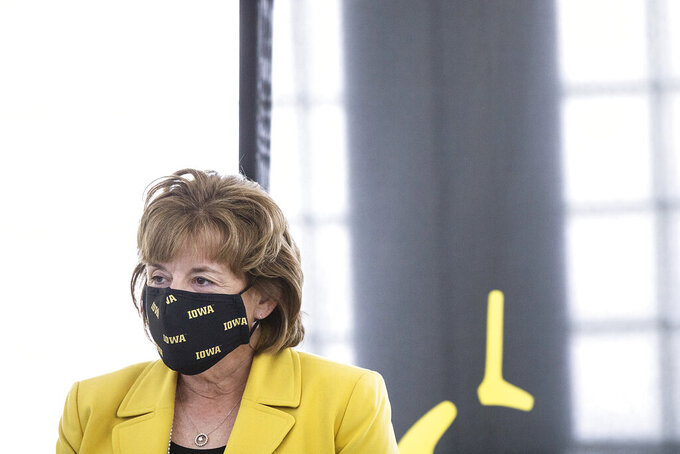 University of Iowa's incoming President Barbara Wilson is introduced during a news conference, Friday, April 30, 2021, at the Levitt Center for University Advancement on the University of Iowa campus in Iowa City, Iowa. The Iowa Board of Regents appointed Wilson on Friday, to succeed Bruce Harreld, who is retiring after leading the campus since 2015, after interviewing four finalists in closed session. (Joseph Cress/Iowa City Press-Citizen via AP)

IOWA CITY, Iowa (AP) — The University of Iowa's governing board on Friday picked the University of Illinois System's No. 2 executive to be the school's next president, opting for an experienced academic leader to succeed a president with an unusual business background.

The Iowa Board of Regents appointed Barbara Wilson to succeed Bruce Harreld, who is retiring after leading Iowa since 2015. The selection came after the nine-member board interviewed four finalists in closed session during a meeting on the Iowa City campus.

Since 2016, Wilson has served as the executive vice president of the University of Illinois System, which includes 90,000 students and 6,000 faculty members on three campuses in Urbana-Champaign, Chicago and Springfield. Previously, she served as the interim chancellor at the flagship Urbana-Champaign campus in 2015 and 2016.

Wilson, a 63-year-old communications researcher with two decades of administrative experience, called the job “a tremendous opportunity to lead a premier research university” and said she was excited to get to work.

“I'm ready to roll up my sleeves,” she said. “We're going to make the University of Iowa as good as it can be and even better.”

The other finalists were University of Iowa education Dean Daniel Clay, Penn State law and international affairs Dean Hari Osofsky and Georgia State University Provost Wendy Hensel. The four had been recommended to the regents by a campus search committee that interviewed 12 semifinalists out of an initial pool of 79 applicants.

The initial reaction from campus was overwhelmingly positive. State Sen. Joe Bolkcom, an Iowa City Democrat who also works at the university, called Wilson a terrific pick and praised the transparent search process.

That's a major contrast to the firestorm that erupted after the board’s selection of Harreld, a Harvard Business School professor and former IBM executive who had no prior higher education management experience. Campus groups had rated Harreld as unqualified, and faculty, staff and students said the regents ignored their input. His tenure had a rocky start and finish.

Harreld surprised campus last fall when he announced plans to retire with years left on his contract, forfeiting a $2.3 million retention bonus. The university dealt with a devastating coronavirus outbreak after Harreld decided to reopen classrooms and residence halls, and it experienced protests for racial justice, budget cuts and heavy turnover in key administrative positions during his watch.

The regents praised Harreld for engineering a $1.165 billion deal to privatize the campus utilities that will help fund campus priorities and for merging the alumni and fundraising foundations to create the new Center for Advancement.

Unlike Harreld, Wilson's experience in academic administration is extensive. At Illinois, she presided over the firing of two football coaches and an athletic director after overseeing investigations into allegations of mistreatment of student-athletes.

In addition to her most recent roles, she previously served as the dean of the College of Liberal Arts and Sciences at Illinois, in vice provost roles and as the head of the university's Department of Communication.

Wilson will lead a campus that has roughly 31,000 students and 25,000 employees across 12 academic colleges, a major medical center, and athletics programs that compete in the Big Ten.

John Keller, the longtime dean of the university’s Graduate College, will serve as interim president beginning May 17 after Harreld departs and stay on until Wilson begins. Keller served as co-chair of the 21-member campus search committee, which privately shared its impressions with the regents and feedback from campus groups on Thursday.

The finalists participated in public forums earlier this month, outlining their backgrounds and visions for the job. Wilson touted her experience, saying her passion was to build relationships with faculty, staff, students and donors.

She will take over as the university faces hostility from some Republicans in the Legislature, who have proposed eliminating tenure for professors, pushed to freeze its budget and tuition rates and accused the school of discriminating against conservatives.

Wilson is a native of Appleton, Wisconsin, and earned undergraduate and graduate degrees in journalism and communications from the University of Wisconsin-Madison. She joined the Illinois faculty in 2000 after stints at the University of California, Santa Barbara, and the University of Louisville. Her research has focused on the social and psychological effects of the media and its impact on children. She is married and had two adult children.