U. of Michigan to require vaccinations to live on campus 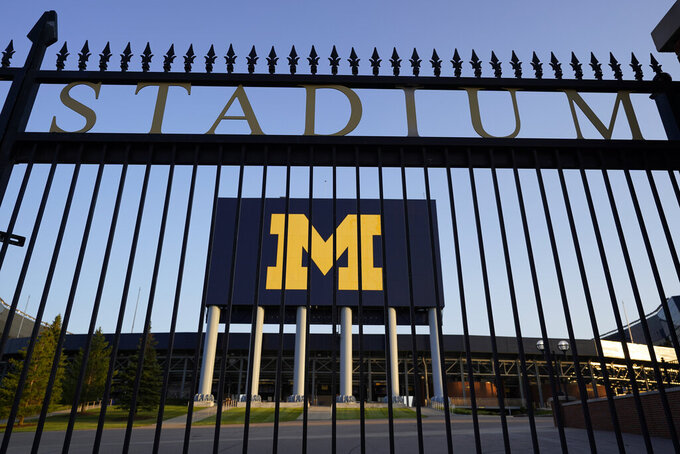 FILE - In this Aug. 14, 2020 file photo, The University of Michigan football stadium is shown in Ann Arbor, Mich. The University of Michigan will require COVID-19 vaccinations for students who live on its Ann Arbor campus this fall. President Mark Schlissel said Friday, April 23, 2021, that shots won't be mandated for faculty, staff and others students "at this time," but he strongly encouraged everyone to be vaccinated. (AP Photo/Paul Sancya, File)

LANSING, Mich. (AP) — The University of Michigan will require COVID-19 vaccinations for students who live on its Ann Arbor campus this fall, school officials announced Friday.

President Mark Schlissel said shots will not be mandated for faculty, staff and other students “at this time," but he strongly encouraged everyone to get vaccinated. The requirement will allow residence halls to operate safely at nearly normal capacity, he said, after there were more than 600 infections in dorms last fall despite a mask requirement and other restrictions.

“In order for a campus to fully recover from the effects of the pandemic, we need everyone who can be to be vaccinated,” Schlissel said in a Zoom update to the campus community, adding that officials were considering several unspecified vaccination incentives. Students must provide proof of their vaccination or an approved exemption by mid-July.

Michigan is the second of the state's 15 public universities to require students living on campus to be vaccinated, joining Oakland.

About 47% of Michigan residents ages 16 and older have received at least one dose, including 33% who are fully vaccinated. The state wants to immunize at least 70%.

Dr. Laraine Washer, medical director of infection control at Michigan Medicine, said there now is broad access to vaccines, but “we're in danger of falling short of getting to the level of vaccination coverage needed to achieve the goal of community immunity that's really required to beat the virus." Medical providers, public health experts and others, she said, have a duty to “turn this vaccine hesitancy into vaccine confidence.”

Henry Ford Health System, a network of five hospitals in the Detroit area and Jackson, for the first time reported a “softening” of vaccine demand at its sites.

The Republican-led state House this week unveiled a higher education budget that attempts to restrict universities from requiring COVID-19 vaccination as a prerequisite for “enrollment or in-person instruction.” according to the House Fiscal Agency. The provision could be vetoed or declared unenforceable by Democratic Gov. Gretchen Whitmer if it survives legislative negotiations. The GOP-controlled Senate did not propose such language.

The federal government reported Friday that Michigan still had the country's highest seven-day case rate, but that the rate continued to decline.

The seven-day average of daily cases was about 5,500, down from the third surge's peak of around 7,000 for several days last week. The number of hospitalized adults with confirmed infections, which hit a record of more than 4,100 early this week, kept declining as well to about 3,650.

Lynn Sutfin, spokeswoman for the state health department, said it was too soon to draw conclusions.

“Some previous plateaus have led into another increase, and while some current trends may appear promising, metrics remain high,” she said. She encouraged residents to wear masks, wash hands, social distance and get the vaccine.