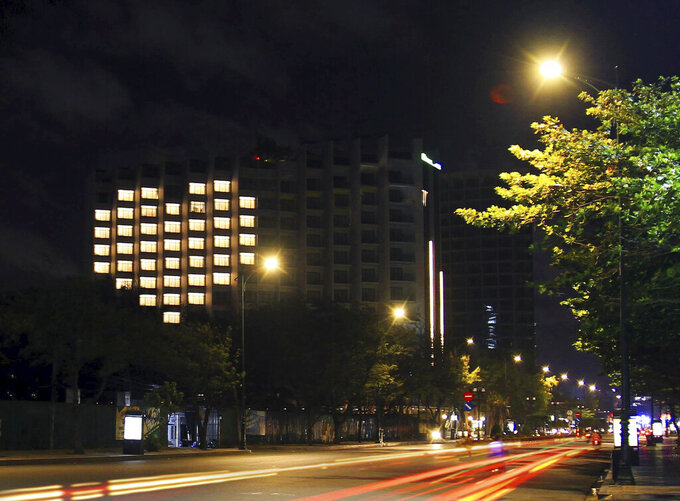 In this Wednesday, April 22, 2020, photo, rooms at ibis style's hotel in Vung Tau, Vietnam, are lit up, forming a heart shape to support the country unity in the fight against COVID-19. The world inched toward a new phase in the coronavirus crisis on Thursday, as some countries like Vietnam and New Zealand with few new cases moved toward ending their shutdowns while others like Singapore and Japan were tightening measures to prevent a surge in infections. (AP Photo/Thanh Tu)

ALTERED STATE OF RETAIL: Retail stores are largely closed across the country and most of the people who worked in those shops have been laid off or furloughed. The pandemic has created a new normal in how people shop as well as what they buy.

— Comparable-store sales at Target rose 7% so far this quarter, but less is being bought by customers at it stores. That seeming contradiction is being driven by booming online sales.

If something is ordered online and either delivered or picked up curbside, Target logs that as a sale for the store from where the goods were delivered, or left out for pick up.

Sales of food and beverages have jumped 20%, while sales of clothes and accessories have tumbled 20%.

— Gap Inc. has stopped paying rent in North America and elsewhere where stores are closed and said Thursday that it may run out of cash to continue without an infusion.

— Hershey sales were helped, and hurt by the outbreak.

Baking supply sales — Hershey syrup, baking chips and cocoa — all jumped about 30% (check your Instagram account if you don't know why). Gum sales have gone in the other direction, with social distancing knocking fresh breath down a few pegs on the priority list. Fewer people are making impulse buys in checkout lines.

— Crocs expects a larger decline in revenues in the second quarter, anticipating that a majority of its retail and partner stores may be closed for the whole period.

— Revenue at Eli Lilly jumped 15% in the first quarter to $5.86 billion. Lilly estimates that it received a boost of about $250 million from customers stocking up on prescriptions due to the COVID-19 pandemic.

— Sales at Unilever are flat as falling sales of ice cream and other foods are offset by soaring sales of cleaning materials.

AIRLINES: Airlines are facing a financial crunch as the virus brings nearly all travel to a halt.

— Faced with a 95% drop in passengers, U.S. airlines are pushing employees to volunteer for leaves of absence, some partially paid and other unpaid. On Thursday, the International Association of Machinists and Aerospace Workers accused Delta and JetBlue of going too far and violating terms of federal aid they are using to help cover payroll costs.

The union said Delta is forcing thousands of employees to work fewer hours. Delta said it is acting properly because it did not cut hourly pay rates. JetBlue told headquarters employees to take 24 days of unpaid leave by Sept. 30.

__ The Association of Flight Attendants asked the Trump administration Thursday to require passengers and crew members on all flights to wear face masks. The union said a mask requirement is needed because flight attendants are in close proximity to passengers on planes and in airports.

— An early rally on Wall Street ran out of steam as data painted a dire economic picture. The government said 4.4 million people filed for unemployment benefits last week as layoffs sweep the economy.

RESTART DATES: The United Auto Workers union is throwing a wrench into any thoughts by Detroit automakers of restarting factories soon.

Union President Rory Gamble says an early May restart date is too soon and too risky for union members. “At this point in time the UAW does not believe the scientific data is conclusive that it is safe to have our members back in the workplace,” Gamble said in a statement.

The statement Thursday comes as other automakers announced plans to restart their North American factories, which have been closed for more than a month to stop the spread of coronavirus.

Toyota said Thursday its restart will begin gradually the week of May 4 in the U.S. and Canada. The company is still waiting for word from the Mexican government on when to restart.

Toyota plans to give workers masks, gloves, hand sanitizer, and face shields where needed. It will install dividers to keep employees six feet or more apart, and it will take their temperatures before they enter plants.

Fiat Chrysler had a May 4 restart date, with Ford and General Motors expected around the same time. But the union statement will almost inevitably delay that.

Also, Honda is adding a week to its shutdown. The company says it will continue to keep its automobile plants closed through May 8.

Detroit automakers employ about 150,000 factory workers in the U.S., while international manufacturers have about 85,000.