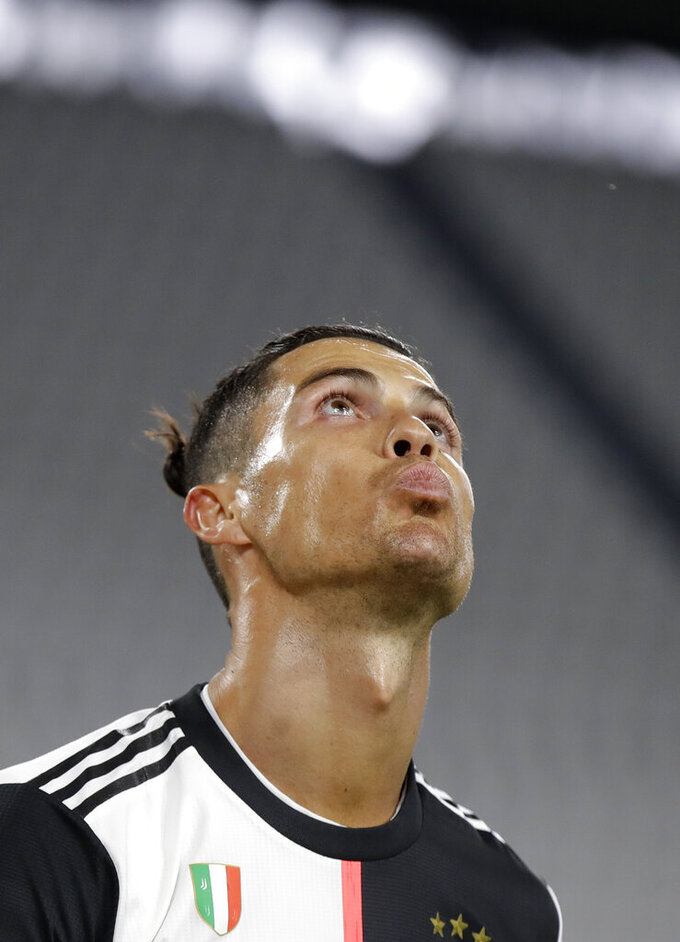 Juventus' Cristiano Ronaldo reacts during an Italian Cup second leg soccer match between Juventus and AC Milan at the Allianz stadium, in Turin, Italy, Friday, June 12, 2020. The match was being played without spectators because of the coronavirus lockdown. (AP Photo/Luca Bruno)

UEFA’s executive committee must agree on the plan on Wednesday among a series of decisions to reschedule international soccer — for Europe’s clubs and national teams — after the coronavirus pandemic upended the global sports calendar.

The most prized trophy in club soccer will be decided in a rare Sunday final at Benfica’s Stadium of Light. It was originally to be on Saturday, May 30 at Ataturk Olympic Stadium in Istanbul, but UEFA looked elsewhere when that city was no longer practical..

Semifinals will be shared by the Stadium of Light and the nearby home stadium of Sporting Lisbon on Aug. 18-19. Four quarterfinals are planned on consecutive nights from Aug. 12-15, Sky Italia reported.

Four quarterfinals places have yet to be decided, and the UEFA executive panel must decide on Wednesday where to schedule second-leg games in the round of 16 that were postponed in March.

Those games could also go to Lisbon or be played without fans in the home stadiums of Barcelona, Bayern Munich, Juventus and Manchester City.

The Europa League mini-tournament is set to be shared by four cities in western Germany with Cologne hosting the final on Friday, Aug. 21. It was meant to be on Wednesday, May 27 in Gdansk, Poland.

The second-tier competition also paused at the round of 16 in March. Six first-leg games were played and two more — Inter Milan-Getafe and Roma-Sevilla — could not be played in Italy when that country was hit hard by coronavirus cases.

A look at the decisions facing UEFA on Wednesday:

Lisbon was the losing candidate in May 2018 when UEFA picked Istanbul to host this season's Champions League final.

After the pandemic wreaked havoc on soccer’s calendar, Lisbon is set to have seven games instead of one in an unprecedented mid-August mini-tournament of single-leg games.

UEFA’s priority during the shutdown was to stabilize hundreds of clubs by allowing time to finish domestic leagues and cups by the first weekend in August.

Next in line is rushing to finish the Champions League and fulfil broadcasting contracts which help pay clubs more than 2 billion euros ($2.3 billion) in prize money. If UEFA’s reschedule plan succeeds, only two broadcast slots are lost.

The Women’s Champions League is set to resume in the quarterfinals with a mini-tournament in Spain ahead of an Aug. 30 final, postponed from May 24 in Vienna.

The Europa League is heading to a mini-tournament in western Germany by a more complicated path.

Only four Champions League last-16 games remain, but the Europa League has 10. It could be eight if Inter-Getafe and Roma-Sevilla become single-leg games.

UEFA is set to pick Cologne, Duisburg, Düsseldorf and Gelsenkirchen on Wednesday for the quarterfinals onward, maybe earlier. Another option is a four-city hub centered on Frankfurt.

This process involving a lot of travel has been complicated by the pandemic.

A UEFA club competitions panel will meet on Wednesday ahead of the executive body to help make efficient sense of the challenge.

The next group stages will likely start in October instead of September. Istanbul and Gdansk could also get their hosting chance one year on.

The Super Cup game between the Champions League and Europa League winners is also being moved from mid-August in Portugal to Sept. 24 in Budapest, Hungary.

UEFA’s biggest recent decision was postponing the European Championship to kick off in June 2021.

All 12 host cities, in 12 countries, had to reconfirm their contractual commitments and should be ratified on Wednesday.

UEFA wants to complete the playoffs — already postponed from March and June slots in the calendar — by November. The semifinals round is likely in October and finals one month later.

These playoffs could be fitted in by squeezing three games instead of two into the weeks of national team soccer in October and November.

National teams face a backlog of games, with valuable space created by the 2022 World Cup in Qatar kicking off in November instead of June.

Those games help decide seeding for the 2022 World Cup qualifying draw due in November.

Four winners of top-tier Nations League groups also advance to a mini-tournament the following year to crown the champion. Portugal was the inaugural winner in 2019.

Dates must be found for the next Nations League Final Four. It was to be in June 2021 that now belongs to Euro 2020.

The 10 qualifying groups were scheduled to start next March, continue in June — now largely unavailable — and finish in November 2021.

Ten group winners go to Qatar and the runners-up advance to a 12-team playoffs bracket that includes two teams based on Nations League standings. The playoffs are scheduled in March 2022.

Makeup dates are now needed, which could be done by having three-game international periods instead of two, or stretching the groups into March 2022 and pushing playoffs to June that year.

One thing is clear; the calendar of UEFA-organized games is stretched to its limits even without a second shutdown caused by more waves of COVID-19 cases.