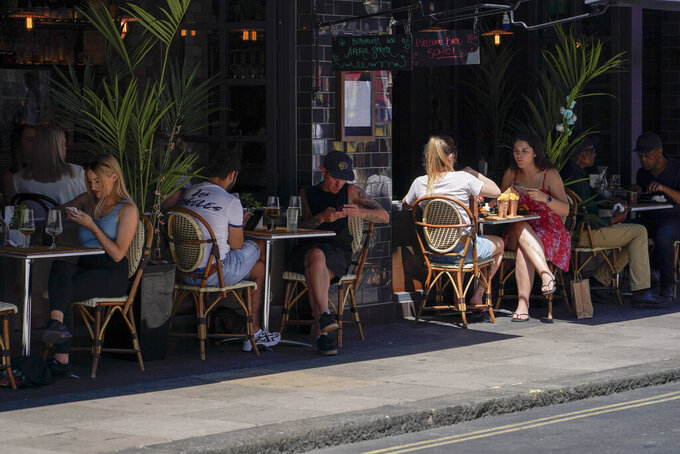 People sit at outdoor tables at a restaurant in Soho, in London, Monday, June 14, 2021. British Prime Minister Boris Johnson is expected to confirm Monday that the next planned relaxation of coronavirus restrictions in England will be delayed as a result of the spread of the delta variant first identified in India. (AP Photo/Alberto Pezzali)

LONDON (AP) — The British government fended off calls Tuesday to provide more financial support to businesses and workers suffering from its decision to delay lifting coronavirus restrictions in England until July 19.

Although many restrictions were eased in recent weeks, allowing large parts of the U.K. economy to reopen, a number of businesses, particularly in the hospitality and entertainment sectors, have remained shuttered because it was not financially viable.

After months of planning, those businesses had been preparing to reopen on June 21, the date the government had earmarked for the possible lifting of restrictions on social contact. But a recent spike in new infections as a result of the more contagious delta variant upended that plan and has fueled concerns that the restrictions may persist beyond July 19.

Scientists advising the government reckon that the delta variant, which was first found in India, is between 40% to 80% more transmissible than the previous dominant strain in the U.K. The alpha variant first found in Britain was largely behind a winter virus surge that left the country with Europe's highest virus-related death toll at nearly 128,000.

“Now is the time to ease off the accelerator, because by being cautious now we have the chance in the next four weeks to save many thousands of lives by vaccinating millions more people," Prime Minister Boris Johnson said Monday when announcing the delay.

Following the announcement, unions joined business leaders to urge the Conservative government to compensate those affected by the delay, warning that it may tip many companies over the edge and lead to a sharp rise in unemployment, which stood at 4.7% in April.

Frances O’Grady, general secretary of the Trades Union Congress, said the government should delay asking businesses to contribute to the salary support program it has operated since March 2020 and retain the program for as long as it's needed.

Under the Job Retention Scheme, the government has been paying 80% of the salaries of those unable to work because of the restrictions. But beginning in July, that support goes down to 70% with firms contributing 10%. The scheme becomes less generous through the summer before it expires at the end of September.

“We can’t afford for more companies to go to the wall, taking good jobs with them,” she said.

And the Confederation of British Industry urged the government to hold back on the planned tapering of tax relief for businesses and extend the commercial rent moratorium for the sectors most impacted.

“We must acknowledge the pain felt by businesses in hospitality, leisure and live events,” the CBI’s director-general Tony Danker said.

Cabinet Officer minister Michael Gove, a close Johnson ally, said the support programs were created knowing that there could be delays in getting out of lockdown. But he said he was “pretty confident” there wouldn't be another delay in lifting restrictions.

“It would require an unprecedented and remarkable alteration in the progress of the disease,” he told Sky News.

Johnson said health officials would use the reopening delay to drive up immunity levels, limiting the spread of the delta variant when restrictions are fully lifted.

The plan is that two-thirds of the U.K.'s adult population will have been offered two vaccine shots, including everyone over 50, by July 19. In a further development Tuesday, the National Health Service said the rollout, which has been primarily based on age, will be accelerated so that every adult should be able to book a first dose by the end of this week.

As of Tuesday, around 62% of the British population had received one vaccine shot, while about 45% had two.

An analysis from Public Health England showed that two doses of the main vaccines in the U.K. are highly effective against hospitalization from the delta variant — 96% in the case of Pfizer and 92% for the AstraZeneca jab.

Scientists have generally welcomed the delay as it means the peak in the current wave of infections will end up being lower.

“We’re at a critical point in the ongoing race between the virus and our vaccination program," said Imperial College epidemiologist Professor Neil Ferguson.

On Tuesday, the British government reported 7,673 new confirmed cases, one of the highest daily numbers since the end of February. The delta variant accounted for around 90% of all new infections.

The opposition Labour Party has put the blame for the spread of the delta variant squarely on the Conservative government, saying it was too slow in imposing the strictest quarantines on all arrivals from India.

“They should have red-listed the delta variant, instead Boris Johnson showed it the red carpet,” said Jonathan Ashworth, Labour's health spokesman.