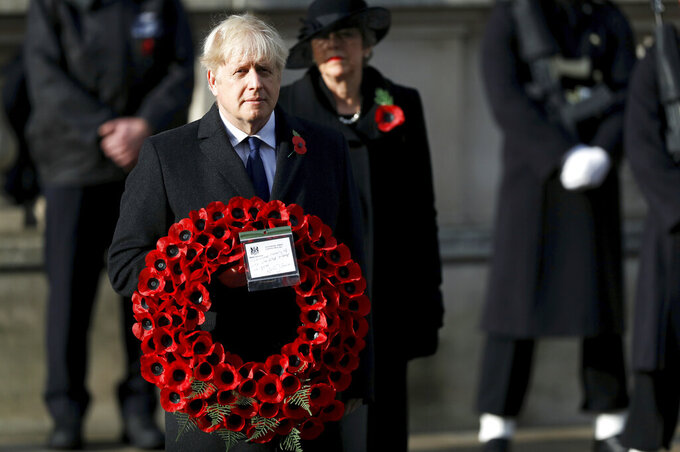 LONDON (AP) — In a scaled-back service, Queen Elizabeth II led tributes Sunday to those from the U.K. and the Commonwealth who perished in wartime, as most veterans paid their respects at home as a result of the coronavirus pandemic.

The 94-year-old monarch looked on from a balcony at a government building above the Cenotaph on Whitehall in central London on the 100th year anniversary of the memorial's installation following the conclusion of World War I. The Cenotaph was officially unveiled on Nov. 11, 1920, two years to the day after the armistice was signed that brought an end to hostilities.

Following a two-minute silence at 11 a.m., Prince Charles laid a wreath on the queen's behalf during the Remembrance Sunday commemoration. Others, including Charles' oldest son, Prince William and Prime Minister Boris Johnson, also laid wreaths in honor of those who have perished in wartime. Leaders from across the political spectrum, including former prime ministers, were also present.

The public were unable to attend this year, with the event taking place during a second national lockdown in England, and were instead encouraged to take part in the two-minute silence at home.

In other years, the commemoration is packed with thousands of veterans and military personnel. In Sunday's service, there were less than 30 veterans in attendance and everyone present observed social distancing rules though mask wearing wasn't mandatory in the outdoor setting.

Though the service was very different, people up and down the land took time out to honor the war dead. Small services were permitted.

World War II veteran Seymour “Bill” Taylor, who turns 96 next month, usually attends the service but paid his respects outside his home in Colchester, around 65 miles (105 kilometers) northeast of London, with the support of his neighbors.

“It’s something that’s really special and it means an awful lot," he said. “I shall remember it as a good day.”

Charles' other son, Prince Harry, wasn't present but spoke about what serving for his country in Afghanistan meant to him.

“Being able to wear my uniform, being able to stand up in service of one’s country, these are amongst the greatest honors there are in life," Harry said in a podcast. “To me, the uniform is a symbol of something much bigger, it’s symbolic of our commitment to protecting our country, as well as protecting our values.”

Gen. Nick Carter, chief of the defense staff, said remembrance services still hold relevance today even though there is no one alive who served in World War I and the number of veterans from World War II are dwindling.

“We have to remember that history might not repeat itself but it has a rhythm and if you look back at the last century, before both world wars, I think it was unarguable that there was escalation which led to the miscalculation which ultimately led to war at a scale we would hopefully never see again,” he said in an interview with Sky News.

“We need to be conscious of those risks and that’s why remembrance matters,” he added.