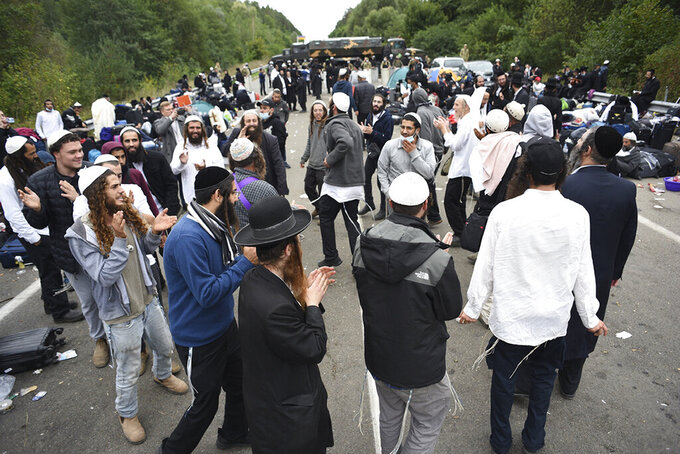 Jewish pilgrims dance as they gather on the Belarus-Ukraine border, in Belarus, Tuesday, Sept. 15, 2020. About 700 Jewish pilgrims are stuck on Belarus' border due to coroavirus restrictions that bar them from entering Ukraine. Thousands of pilgrims visit the city each September for Rosh Hashana, the Jewish new year. However, Ukraine closed its borders in late August amid a surge in COVID-19 infections. (TUT.by via AP)

KYIV, Ukraine (AP) — Ukraine and Belarus traded angry accusations Wednesday over thousands of Hasidic Jewish pilgrims who have remained stuck on their border after Ukraine denied them entry because of coronavirus restrictions.

Ukraine's presidential office urged Belarusian authorities to stop issuing misleading signals to the ultra-Orthodox Jewish pilgrims that they could eventually cross the border.

“We are asking Belarusian authorities to stop fueling the tensions on the border and refrain from spreading false encouraging statements that could leave the pilgrims with a feeling that the Ukrainian border might be opened,” it said. “Belarusian authorities have deliberately or unintentionally helped spread those rumors.”

Belarusian Foreign Ministry spokesman Anatoly Glaz shot back at Ukraine, accusing it of “inhumane” treatment of the Jewish pilgrims.

Ukrainian authorities said about 2,000 Hasidic Jewish pilgrims converged on the border in hopes of crossing over and reaching the Ukrainian city of Uman.

The grave of an important Hasidic rabbi who died in 1810, Nachman of Breslov, is located in Uman. Thousands of the ultra-Orthodox Jews visit the city each September for Rosh Hashana, the Jewish new year.

This time, however, Ukraine closed its borders in late August amid a surge in COVID-19 infections. Belarus, which shares a long border with Ukraine, hasn't barred foreign visitors from entering.

As the Jewish pilgrims have gathered on the border, Ukraine has deployed additional forces to protect the frontier and sent aircraft and drones to patrol it.

Glaz, the Belarusian Foreign Ministry spokesman, accused Ukrainian authorities of being reluctant to find a solution and trying to shift blame.

Late Tuesday, the Belarusian government said it was offering to help Ukraine set up a “green corridor” for the pilgrims to get to Uman and back to Belarus.

Belarusian President Alexander Lukashenko’s spokeswoman, Natalia Eismont, said Belarus was ready to provide buses to drive the pilgrims to Uman and back and make all the necessary precautions to prevent a spike in new infections.

Ukraine's presidential office hinted that Belarusian authorities' actions could be rooted in the latest tensions between the two neighbors following Belarus' presidential election.

Ukraine has joined the United States and the European Union in criticizing the Aug. 9 vote in which Lukashenko extended his 26-year authoritarian rule as neither free nor fair and urged Belarusian authorities to end their crackdown on protesters.

In Wednesday's speech, Lukashenko accused Ukraine of working in cahoots with the U.S. and its allies to foment the protests demanding his resignation.