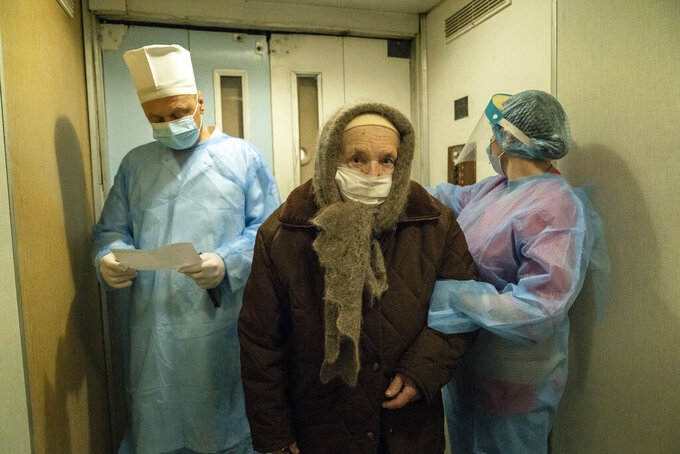 Two medical workers escort an elderly woman suffering from COVID-19 into a hospital in Kolomyia, western Ukraine, Tuesday, Feb. 23, 2021. After several delays, Ukraine finally received 500,000 doses of the AstraZeneca vaccine marketed under the name CoviShield, the first shipment of Covid-19 vaccine doses. The country of 40 million is one of the last in the region to begin inoculating its population. (AP Photo/Evgeniy Maloletka)

KYIV, Ukraine (AP) — Ukraine on Tuesday received its first shipment of coronavirus vaccine, raising hopes that authorities can start beating back the virus' spread in a country where cases have strained the fragile health care system.

A consignment of 500,000 doses of the AstraZeneca vaccine was flown to the capital Kyiv from India.

Officials said the first tranche of vaccine will be administered to medical workers and military personnel in eastern Ukraine, where conflict with Russian-backed separatists has been ongoing since 2014, and to regions of western Ukraine where the rate of infections has been the most severe.

Ukraine also expects to receive more vaccine doses under the COVAX distribution program, including those produced by Pfizer/BioNTech and Novavax. The country has also signed an agreement to buy 1.9 million doses of vaccine from the Chinese company Sinovac Biotech, the first deliveries of which are expected in April.

Since the beginning of the pandemic, Ukraine has recorded 1.3 million infections and 25,309 deaths.

The number of coronavirus cases in the western part of the country has risen sharply since the end of a strict two-week lockdown last month. In the city of Ivano-Frankivsk, the Emergencies Ministry put up a hospital of 10 tents with 120 beds in case of an sudden influx of patients.

The rise in infections has put doctors under severe strain.

Viktor Boyko, the chief of the hospital in the western city of Kolomyya said there aren't enough doctors to help the ill, while physicians are “burning out” amid all the suffering of patients they can't treat.

“Vaccination should help, we are glad that the vaccine is coming and soon we will have a reliable shield against this disease,” said Boyko.

There are concerns that strong resistance among some people to get inoculated could undermine the country's vaccination campaign. Opinion polls show that almost 40% of Ukrainians refuse receive a shot over fears of its side-effects.

Among those who are reluctant to receive a shot is Sergei Khabustov, 63, who is in the Kolomyya hospital along with his 85-year-old mother. He said people are afraid because they aren't aware of what the vaccine is exactly.

Mstyslav Chernov in Kolomyya, Ukraine, contributed to this story.