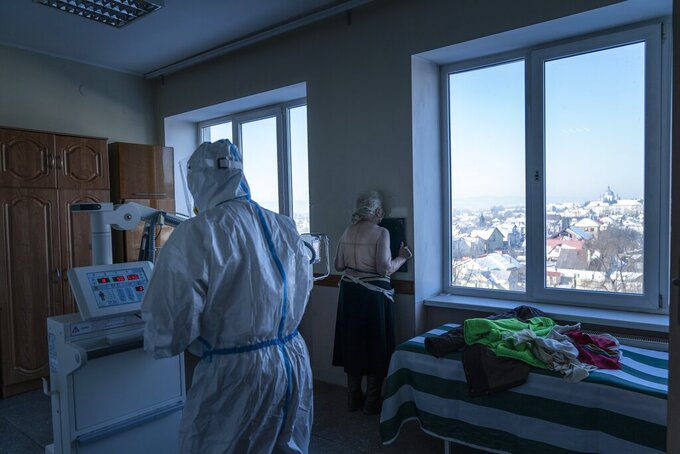 A medic wearing a special suit to protect against coronavirus, back to a camera prepares a patient with coronavirus for a lung X-ray at a hospital in Kolomyia, western Ukraine, Tuesday, Feb. 23, 2021. After several delays, Ukraine finally received 500,000 doses of the AstraZeneca vaccine marketed under the name CoviShield, the first shipment of Covid-19 vaccine doses. The country of 40 million is one of the last in the region to begin inoculating its population. (AP Photo/Evgeniy Maloletka)

KYIV, Ukraine (AP) — Ukraine launched a COVID-19 vaccination campaign Wednesday in hopes of halting the spread of the coronavirus that has put a significant strain on the country's teetering health care system.

Medical workers and military personnel in different regions of the country were the first to get their shots of the Oxford-AstraZeneca vaccine, 500,000 doses of which arrived in the Ukrainian capital from India on Tuesday.

It is better to prevent infections "than to treat the complications of the disease later,” said Yevgeny Gorenko, an intensive care specialist who was the first person to receive a shot on Wednesday. Gorenko works in a COVID-19 ward at a hospital in Cherkasy, a city 200 kilometers (124 miles) southeast of Kyiv.

Ukrainian authorities plan to vaccinate 14.4 million people this year, or about 35% of the country's 41-million population.

Officials said the first vaccine supplies will be administered to medical workers and military personnel in eastern Ukraine, where a conflict with Russian-backed separatists has been ongoing since 2014, and to regions of western Ukraine where infection rates have been highest.

Ukraine expects to receive more vaccine doses under the U.N.-backed COVAX distribution program, including those produced by Pfizer-BioNTech and Novavax. The country has also signed an agreement to buy 1.9 million doses of vaccine from Chinese company Sinovac Biotech.

Since the beginning of the pandemic, Ukraine has recorded 1.3 million confirmed cases and more than 25,000 deaths.

The number of confirmed virus cases in the western part of the country has risen sharply since a two-week lockdown ended last month. The Ivano-Frankivsk region has been declared a “red zone,” with local authorities re-imposing lockdown restrictions there and putting up makeshift hospitals.

The surge in infections has put a severe strain on medical workers, who hope the immunization drive will bring relief.

“This is the strongest wave (of the outbreak). We haven’t faced (a wave) like that yet,” said Vitaly Akubyak, a hospital anesthesiologist in the western city of Kolomyya.

The hospital where he works is currently full, treating 175 COVID-19 s patients, even though it initially only had capacity to admit 150 people.

Mstyslav Chernov in Kolomyya, Ukraine, contributed to this story.