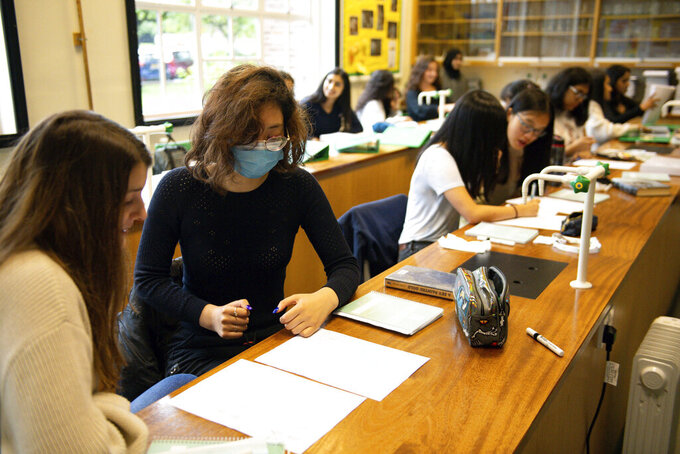 Sixth form pupils in their lessons at the King Edward VI High School for Girls in Birmingham, England, Thursday, Sept. 3, 2020, as schools across England reopen to students following the coronavirus lockdown. Millions of children are returning to school across Europe and beyond in a mass experiment aimed at bridging inequalities and resuscitating economies despite the persistent pandemic. Governments are trying to show that life goes on despite a virus that has infected at least 25 million people worldwide and killed more than 850,000. (Jacob King/PA via AP) 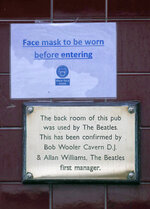 LONDON (AP) — British Prime Minister Boris Johnson’s new strategy for combating COVID-19 seemed to unravel Wednesday as regional leaders chose their own paths and the mayors of the cities facing the toughest restrictions accused Johnson of using the crisis to divide them for political advantage.

Fearing Johnson hadn't gone far enough, two regions in the United Kingdom chose to impose tougher measures than the prime minister. Northern Ireland said it would close schools, pubs and restaurants to slow the spread of the virus, while Wales announced it would not allow in people from hot spots in other parts of the U.K.

As Liverpool, the only area that has been placed under England's toughest restrictions, prepared for the new rules to take effect, revelers spilled into the streets as bars closed Tuesday night amid fears they may not reopen again until spring.

Social media showed the images, including one video of a police car slowly moving through the crowd as partiers banged on the side of the car.

“These pictures shame our city, attacking our brave police officers is unacceptable," Liverpool City Mayor Joe Anderson tweeted. “Our health service is creaking, 300 in hospital and 30 people dead in week. Ignoring these facts is why we are in Tier 3 measures.”

The leader of greater Liverpool's regional government criticized Johnson’s handling of the crisis. The government refused until last week to work with local leaders in the fight against COVID-19, and now it is trying to use Liverpool’s acceptance of tough new restrictions as a way to force other cities into doing the same, Steve Rotheram said during a video news conference with Andy Burnham, leader of the Greater Manchester Combine Authority.

The wrangling came as England’s new three-tiered system of restrictions took effect across the country. Health officials met Wednesday to discuss whether other areas, including Manchester and Lancashire, should join Liverpool in the highest risk tier, which would bring with it additional measures such as closing pubs and banning social gatherings with other households.

Greater Manchester’s regional government on Wednesday rejected efforts to move it into the highest tier, saying infection rates and levels of hospitalization in the metropolitan area are much lower than those in Liverpool.

Burnham said the U.K. government was trying to force local leaders into making the hard decisions about which businesses to shut down without providing enough financial assistance to mitigate the economic impacts. Given the government’s current offer, the majority of regional leaders would prefer a short national lockdown to the tiered approach, Burnham said.

“We’ve gone from an approach that was about ‘whatever it takes to get the country through this’ to a penny-pinching approach to this pandemic where the cost will fall very much on people in the real world whose businesses are already close to the brink,″ he said.

Britain already has Europe’s deadliest outbreak, with more than 43,000 confirmed deaths, and Northern Ireland has the highest infection rate in the U.K.

In the U.K.’s system of devolved authority, Northern Ireland, Scotland and Wales control their own health policies and therefore their response to the pandemic. The U.K. government decides the policy for England, but says it is coordinating with the others.

But Welsh First Minister Mark Drakeford said he was forced to act because Johnson had ignored requests to ban travel from areas with high infection rates. He said it wasn’t an issue about the border, but a “matter of fairness.''

Northern Ireland, meanwhile, announced the tightest restrictions in the U.K., closing schools for two weeks and pubs for four weeks, except for takeout orders.

The announcement came after talks among political parties in the region’s power-sharing government that stretched from Tuesday night into Wednesday morning.

“This is not the time for trite political points,″ First Minister Arlene Foster told lawmakers at the regional assembly in Belfast. “This is the time for solutions.″

By contrast, Johnson and Labour Party leader Keir Starmer sparred over the government’s response to COVID-19 during their weekly question-and-answer session in the House of Commons.

Starmer contrasted Johnson’s earlier pledge that science would guide the response to COVID-19 with the recent release of a report showing that the government’s scientific advisers had recommended a tougher approach to tackling the pandemic, including a two- to three-week national lockdown to try to contain rapidly rising infection rates.

“Why did the prime minister reject that advice and abandon the science?” Starmer asked.

Johnson accused Labour of trying to exploit the crisis for the opposition party's own political benefit. The government chose a regional, tiered approach because it had to balance the scientific advice against the economic and social harm caused by a national lockdown, Johnson said.

“I rule out nothing, of course, in combating the virus but we’re going to do it with the local, regional approach that can drive down and will drive down the virus if it is properly implemented,” he said.