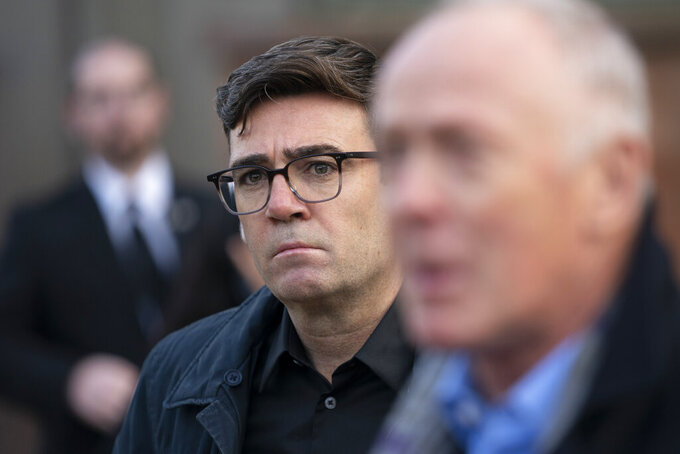 Greater Manchester mayor Andy Burnham looks on, outside Bridgewater Hall, following last-ditch talks with the Prime Minister aimed at securing additional financial support for his consent on new coronavirus restrictions, in Manchester, England, Tuesday, Oct. 20, 2020. The British government appeared poised Tuesday to impose strict coronavirus restrictions on England's second-largest city after talks with officials in Greater Manchester failed to reach an agreement on financial support for people whose livelihoods will be hit by the new measures (AP Photo/Jon Super)

LONDON (AP) — British Prime Minister Boris Johnson imposed strict coronavirus restrictions on England's second-largest urban area Tuesday, after talks with officials in Greater Manchester failed to reach an agreement on financial support for people whose livelihoods will be hit by the new measures.

Johnson, who has been struggling to impose his plan for localized restrictions on restive regions, said he “bitterly” regrets ordering measures that would damage businesses, but stressed that not acting would put lives and the health care system in Manchester at risk.

Britain's government and local politicians have been standing off for days over the effectiveness of a three-tier alert system Johnson introduced last week. Greater Manchester Mayor Andy Burnham has been fighting for more financial support for workers and businesses affected by the restrictions in his region of almost 3 million people.

At a minute past midnight on Friday, Greater Manchester will join the Liverpool and Lancashire regions of northwest England which have been placed in Tier 3, the highest level.

“Unfortunately an agreement wasn’t reached and I do regret this,” Johnson said, adding that his government has made a “generous and extensive offer” to support the region's businesses.

Burnham accused Johnson's government of walking away from negotiations, and said the restrictions would affect the poorest and those in greatest need for financial help: “people working in pubs, in bookies, driving taxis, people too often forgotten by those in power.”

Johnson’s government is resisting a recommendation from its scientific advisers to have a short “circuit-breaker” lockdown to curb the spread of coronavirus. Instead it has adopted a three-tier system for England, with areas classed as medium, high or very high virus risk. In the top tier, pubs have to close and people are barred from mixing with members of other households.

Burnham, a member of the opposition Labour Party, said Manchester has been under some form of restrictions for months, and tightening them further “would be certain to increase levels of poverty, homelessness and hardship within our city region.”

“It cannot be right to close people’s place of work, to shut somebody’s business, without giving them proper support," he said.

Burnham said he had sought 90 million pounds ($117 million) to help people get through the winter, and had been willing to accept 65 million pounds. It was unclear how much the city would receive.

Under the U.K.’s system of devolved government, the regional administrations in Northern Ireland, Scotland and Wales control health policy in their areas and the U.K. government makes the rules for England.

In Scotland, pubs and other leisure facilities are closed and sports and live events are banned in the biggest cities of Glasgow and Edinburgh, with slightly less stringent restrictions elsewhere.

Northern Ireland has closed schools for two weeks, banned most social gatherings and shut down many businesses including bars and restaurants for a month.

Wales has gone the furthest, announcing a two-week “firebreak” lockdown starting Friday that will close all non-essential businesses and ban most trips outside the home.

Welsh First Minister Mark Drakeford said he was opting for a short, sharp shock over a longer period of less stringent restrictions.

“The advice to us -- partly because of the impact on people’s mental health -- was that if you could keep this period of time as short as you could, that would help to mitigate that impact,” Drakeford told the BBC.