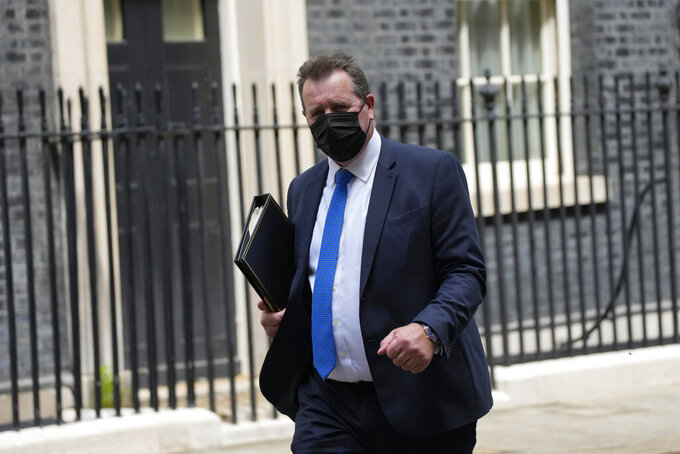 LONDON (AP) — British lawmakers failed to force a vote Monday on the government's cut to foreign aid spending, sparing Prime Minister Boris Johnson from a potentially embarrassing defeat before he hosts the Group of Seven summit this weekend.

Though the non-partisan speaker in the House of Commons, Lindsay Hoyle, ruled that an attempt to reverse the cut via an amendment to a bill going through parliament wasn't appropriate, he rebuked the government for not having put to a vote its decision last November to cut the proportion of national income set aside for foreign aid from 0.7% to 0.5%.

He encouraged lawmakers to bring forward a separate motion for an emergency debate on Tuesday and said the Conservative government should bring the decision to a vote soon.

“I expect that the government should find a way to have this important matter debated and to allow the House formally to take an effective decision,” he said. “And if not, we will then look to find other ways in which we can move forward.”

The original target, which had been enshrined in legislation, had helped the U.K. gain a strong reputation in the developing world over the past couple of decades. The cut amounts to around 4 billion pounds ($5.6 billion).

Critics, which include Johnson’s predecessor Theresa May and former Cabinet ministers Andrew Mitchell and David Davis, say the cut will lead to hundreds of thousands of avoidable deaths in developing nations and damages Britain's international reputation. They also say it undermines Johnson in the run-up to his hosting of a Group of Seven leaders summit on Friday.

Britain's Treasury has argued that the cut was necessary to free up cash to spend domestically at a time when the British economy is trying to recover ground lost during the coronavirus pandemic. It also has said it's a temporary measure and that the U.K. will remain one of the biggest aid spenders, with around 10 billion pounds earmarked this year in the fight against poverty and climate change.

The dispute comes before Johnson hosts the summit of the G-7 wealthy nations where support for the developing world is set to be one of the main topics of discussion.

Johnson has been promoting the June 11-13 summit in Cornwall, southwest England, as an opportunity for the U.K. to assert itself on the global stage following the nation's departure from the European Union. The U.K. will also host a major environmental summit later this year in Glasgow, Scotland.

“It is bitterly disappointing that parliament missed today’s opportunity to vote on keeping its promise to voters and the world’s most vulnerable people by restoring the 0.7% pledge,” said Sam Nadel, head of policy and advocacy at the anti-poverty campaigning group Oxfam.

“As the country prepares to welcome G-7 leaders, the government continues to undermine the U.K.’s credibility on the international stage while its commitments to the world’s poorest are abandoned," he added.

The decision to cut the aid target went against the Conservative government’s promise in the 2019 general election to maintain it and has drawn condemnation from across the political spectrum.

“It’s a life-and-death issue," former Labour Party Prime Minister Gordon Brown told the BBC. “We’re actually deciding who lives and who dies, particularly at this point where if we withdraw the money for vaccination it’s the equivalent of pulling away the needle from a kid or from an adult who is sick.''