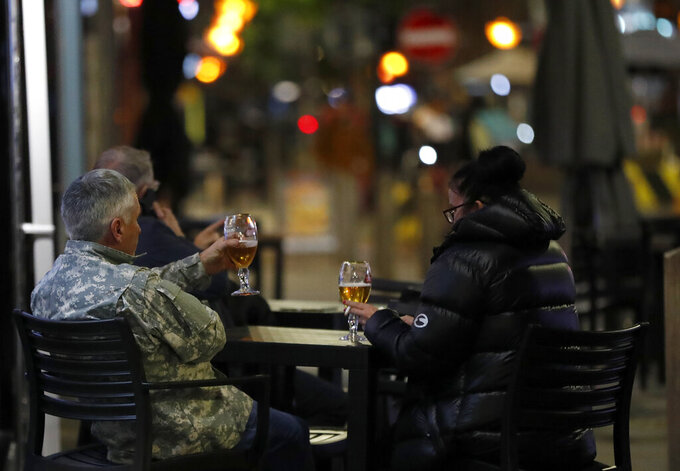 People drink a beer outside a restaurant in Liverpool, England, Wednesday, Oct. 14, 2020. As the first area in England slapped with strict new restrictions to curb the resurgent coronavirus that have shuttered pubs and imperiled thousands of jobs, Liverpool again feels it's being punished by policies made in Britain's capital, 180 miles (290 kilometers) to the south. (AP Photo/Frank Augstein)

Johnson says action is needed as case numbers and hospitalizations are rising rapidly. He appealed to leaders of the region's 2.8 million people to reconsider the government's offer — heaping pressure on Greater Manchester's mayor, Andy Burnham.

“I cannot stress enough: time is of the essence. Each day that passes before action is taken means more people will go to hospital, more people will end up in intensive care and tragically more people will die,'' Johnson said during a news conference in London. “Of course, if agreement cannot be reached I will need to intervene in order to protect Manchester’s hospitals and save the lives of Manchester’s residents. But our efforts would be so much more effective if we work together.”

Johnson this week introduced a three-tier regional approach to combating the coronavirus pandemic, with each tier bringing in progressively tighter restrictions. The government is trying to slow rising infection rates and prevent the National Health Service from being swamped with COVID-19 cases this winter while seeking to avoid a national lockdown that would ravage the U.K.’s struggling economy

Earlier Friday, England's northwestern county of Lancashire, home to 1.5 million people, agreed to accept the most severe level of COVID-19 restrictions as the British government warned Friday that it has the authority to impose such measures on high-risk areas that continue to resist.

Geoff Driver, leader of the Lancashire County Council, said the county had struck a 42 million pound ($54.4 million) deal with the government to cushion the impact of business closures and other measures designed to slow the spread of the virus. Lancashire joins neighboring Liverpool in the government’s highest risk tier, forcing pubs and bars to close. Limits on socializing also come into effect and residents are advised to minimize travel.

The British government is sticking to its strategy amid mounting political and scientific pressure for stronger nationwide measures to prevent the coronavirus pandemic from spiraling out of control.

Johnson reiterated the government’s belief that a regional approach — where the toughest restrictions are imposed only in the areas with the highest infection rates — is the best way to slow the spread of the virus and protect the economy. He did not rule out a national lockdown.

“Taking action is the right and responsible thing to do and it is backed up by significant support for areas on very high alert,” he said.

The government has been under fire since Johnson unveiled his strategy on Monday amid revelations that scientific advisers had recommended a short nationwide lockdown, or “circuit break,'' to slow rapidly rising infection rates. Opposition politicians accuse ministers of doing too little, too late.

Jeremy Farrar, an infectious disease specialist who sits on the government’s scientific advisory panel, said Friday that restrictions imposed under the three-tier strategy aren’t tough enough to bring the virus under control, and that squabbling over where and when to impose the measures risks confusing the public.

Calling the situation the “worst of all worlds” Farrar said the U.K. needs to quickly implement tighter restrictions nationwide to slow the spread of the virus and limit broader damage to society.

“I think we’ve got to come together as a country,” Farrar told the BBC. “The fragmentation and, frankly, making this either a north-south or a party political issue, that’s a very, very dangerous route to go on.”

London and seven other areas will move into the second-highest risk tier on Saturday, leading to increased restrictions on more than 11 million people.

In Wales, First Minister Mark Drakeford said Friday the government is considering a two or three week circuit break to get the virus under control. A decision is planned for early next week.

“This would be a short, sharp shock to the virus, which could turn back the clock, slowing down its spread and buying us more time and vital capacity in the health service,'' he said.

And in Northern Ireland, a local lockdown also comes into effect, closing schools for two weeks and bars and restaurants for a month, with the exception of take away food.