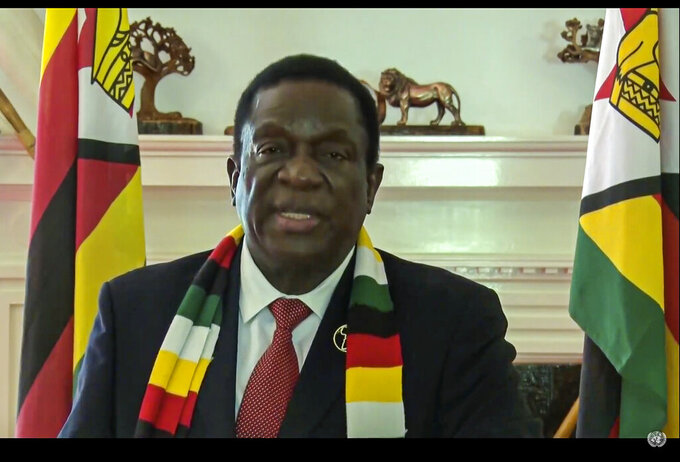 In this UNTV image, Emmerson Dambudzo Mnangagwa, President of Zimbabwe, speaks in a pre-recorded video message during the 75th session of the United Nations General Assembly, Thursday, Sept. 24, 2020, at UN headquarters. The U.N.'s first virtual meeting of world leaders started Tuesday with pre-recorded speeches from heads-of-state, kept at home by the coronavirus pandemic. (UNTV via AP)

JOHANNESBURG (AP) — African nations came out swinging on the third day of the United Nations annual gathering of world leaders Thursday, calling for dramatic fiscal measures to help economies survive the coronavirus pandemic — which one leader called the “fifth horseman of the apocalypse.”

Africa's 54 countries estimate they need $100 billion in support annually for the next three years, pointing out that it’s a fraction of the trillions of dollars some richer countries are using to revive their economies.

As some world powers go their own way during the crisis — what Zimbabwean President Emmerson Mnangagwa called “the blind pursuit of narrow interests” — the African nations that make up more than a quarter of U.N. members are leaning hard into multilateralism.

Reminding fellow leaders of what brought the U.N. to life 75 years ago, President Teodoro Obiang of Equatorial Guinea said the victors of World War II “had conflicting interests but were able for a moment to unite and were able to place the salvation of the world above their own interests.”

Now, the world is nearing 1 million confirmed COVID-19 deaths — though experts believe the real toll is likely higher — and untold others are dying from other diseases and hunger.

Debt cancellation is needed to free up more resources to tackle the crisis, African heads of state said. Meanwhile, Africa has tilted into its first recession in a quarter-century, stalling years of success that saw several countries among the world's fastest-growing economies.

The president of one of them, Ivory Coast, called for the extension of a G-20 debt moratorium beyond the end of this year and the issue of special drawing rights at the International Monetary Fund.

“I call on all Africa’s partners to take bolder measures,” Alassane Ouattara said, noting that the fight against COVID-19 and its economic effects has represented 5% of the country’s GDP.

In fact, reforms of Bretton Woods institutions like the IMF and World Bank might be needed to “usher in a fairer international order,” Gabon President Ali Bongo Ondimba said.

The pandemic has exposed the poor funding of health systems across Africa. In a separate briefing Thursday, a World Health Organization official said just 51% of health facilities in sub-Saharan Africa have basic water services.

In their U.N. speeches, delivered virtually by video messages because of the pandemic, some African heads of state acknowledged they must do more, too.

The Ivory Coast leader, for one, pledged that his country will invest $3 billion in its health system from 2021 to 2025.

Health experts say Africa has fared far better than the dire predictions early in the pandemic. There have been over 1.4 million confirmed cases on the continent of 1.3 billion people, and the WHO says the rate of new cases in sub-Saharan Africa has steadily declined for the past two months.

Experts say possible factors include Africa’s relative youth, the later arrival of the virus and swift lockdown measures. The relatively low number of international air links has protected the continent but hurt the delivery of some life-saving goods like childhood vaccines.

“The pandemic has reversed our gains" on many fronts, including the strengthening of democracy, Gambian President Adama Barrow said.

Spurred by this year's turmoil over racial injustice and inequality, African nations also rallied around the perennial demand for a permanent seat on the U.N.'s most powerful body, the Security Council — or even two. The council reflects a world order of decades ago that few people in Africa recognize, some said.

“Certainly, Africa’s voice on the council will build confidence and reinforce the legitimacy of its decisions,” Barrow said.

President Roch Marc Christian Kabore of Burkina Faso recalled the U.N. chief’s speech early this year warning against the “four horsemen of the apocalypse,” including geopolitical tensions and climate change.

“Unfortunately," he said, “less than two months later, a fifth horseman of the apocalypse — very destructive, the coronavirus — has appeared.”