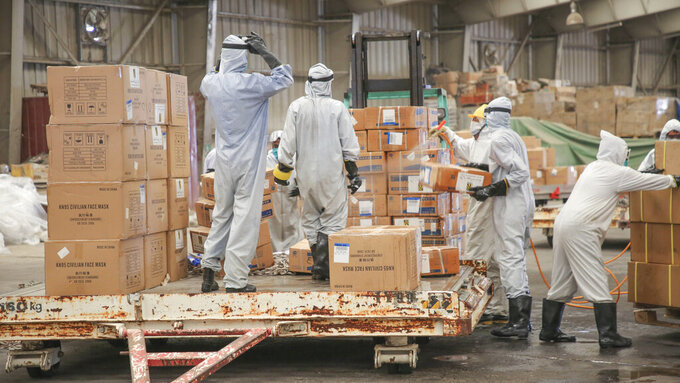 In this Wednesday, June 17, 2020, workers disinfect boxes of medical supplies on arrival at Sanaa International Airport in Sanaa, Yemen. The shipment includes ventilators, coronavirus test kits, PCR machines and personal protective equipment. Organized by the United Nations and private companies, it comes as the UN is facing a funding shortage for its operations in the war-torn country, where officials and medical experts fear the coronavirus could be spreading unchecked due to limited medical facilities. (World Health Organization via AP)

UNITED NATIONS (AP) — The U.N. chief called for more pressure to be applied to Yemen's warring parties to come together to arrange a cease-fire in the war that has cost more than 10,000 lives and displaced 2 million people in the world's worst humanitarian disaster.

Yemeni people are “suffering terribly” and COVID-19 is worsening their situation, Secretary-General Antonio Guterres said Tuesday in an interview with The Associated Press.

He spoke before a closed briefing to the U.N. Security Council by U.N. special envoy to Yemen Martin Griffiths on Wednesday afternoon.

In 2014, Iranian-backed Shiite Houthi rebels overran the capital, Sanaa, and much of Yemen’s north, driving the government of President Abed Rabbo Mansour Hadi into exile. A U.S.-backed, Saudi-led coalition intervened the following year to try and restore Hadi’s rule.

The war has settled into a stalemate, compelling major regional players to seek an exit.

Guterres said the United Nations has been working to bring the parties together and has been promoting “confidence-building measures, namely in relation to the use of the airport, the harbors, the payment of salaries and at the same time the beginning of a political process.”

“I’m still confident that that is possible," the secretary-general said, “and we need to put all pressure on the parties to the conflict and all relevant actors in order to make sure that the intense discussions that we have had in this regard lead to a positive outcome.”

Last month, Griffiths reported “significant progress” in negotiations toward a cease-fire, but warned of stark challenges as coronavirus spreads at an unknown rate across the Arab world’s poorest nation.

He urged the Saudi-led coalition and the Houthis to quickly resolve differences over humanitarian and economic measures needed to move peace efforts forward and help the country counter the virus.

Diplomats have stressed that a peace deal in Yemen must reconcile not only the government and the Houthis, but the south and the north as well.

Guterres said the Yemenis are a generous people “that has always had difficulties in finding unity among themselves, but it’s a people that deserves this.”

On Monday, the Saudi-led coalition announced a breakthrough in the south.

The coalition said the separatists’ Southern Transitional Council which is backed by the United Arab Emirates and the country’s Saudi-backed internationally recognized government have agreed to a cease-fire after months of infighting.

The agreement aims to close the rift between Saudi Arabia and the United Arab Emirates, nominal allies in the war against the Houthis.

Southern Yemen existed as an independent nation from 1967 until unification in 1990 and the secessionist council, an umbrella group of heavily armed and well-financed militias propped up by the UAE since 2015, hopes to restore an independent southern Yemen.

In addition to the ongoing war, Yemen is also facing a dire humanitarian crisis.

A U.N. humanitarian appeal for Yemen this month fell $1 billion short of what aid agencies needed.

Some 75% of U.N. programs for the country, covering essentially every sector, from food to health care and nutrition, have shut their doors or reduced operations. The World Food Program had to cut rations in half and U.N.-funded health services were reduced in nearly 200 hospitals nationwide.