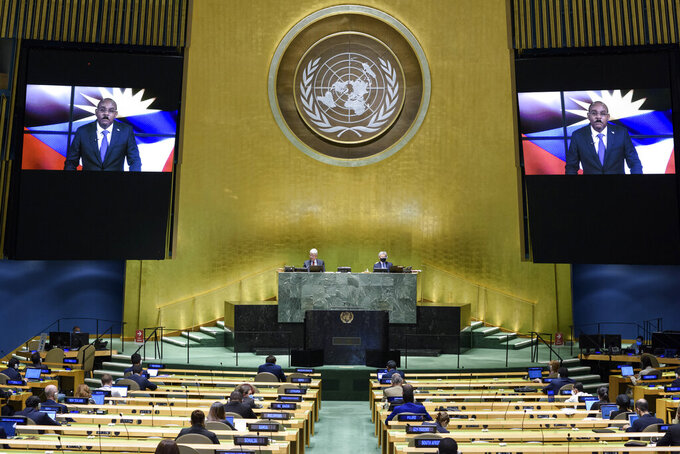 In this photo provided by the United Nations, Gaston Alphonso Browne, Prime Minister of Antigua and Barbuda, speaks in a pre-recorded message which was played during the 75th session of the United Nations General Assembly, Friday, Sept. 25, 2020, at the UN. headquarters. (Loey Felipe/UN Photo via AP)

PARIS (AP) — Leaders of countries once subjugated to Western powers sent a pointed message at this year’s U.N. General Assembly: For those who think the word “colonialism” evokes a long-ago, no-longer-relevant era, think again.

Several leaders raised this year’s global protests inspired by the Black Lives Matter movement in the United States and renewed demands for reparations for the slave trade, calling them just one step in a still-unfinished reckoning with crimes of former empires.

The onetime French colony of New Caledonia -- still run by Paris, more than 10,000 miles and 10 time zones away – is voting Sunday on whether to break free. A Congolese activist is going on trial Wednesday in France after recently trying to “take back” African art plundered from colonies and now showcased in European museums.

“The global movement for racial justice and equality is not a passing phenomenon,” said Paul Kagame of Rwanda, once colonized by Germany and Belgium. “What is required is action that builds public trust in the equal dignity of all citizens, as demonstrated in the treatment of those who have historically been most marginalized, and who continue to suffer mistreatment disproportionately.”

Both past and present are infusing discussions about the state of the world’s nations at the General Assembly, which wraps up Tuesday, and where leaders of ex-colonies get equal time with ex-colonizers at the planet’s most important diplomatic event.

Sierre Leone’s vice president gave world nations a 10-year deadline to wrap up the colonial era, once and for all. Vanuatu in the South Pacific and Mauritius in the Indian Ocean were among those who used the U.N. event to press territorial disputes left over from colonial times.

And the leader of Caribbean ex-British colony Antigua and Barbuda said it’s time for creditor countries – many of whom built empires thanks to slave labor and exploiting colonies’ resources – to forgive poor-country debt amid 2020’s global economic crisis.

Since the birth of the United Nations 75 years ago, its ranks have mushroomed from 51 members to 193, as territory after territory shed old-world rulers and proclaimed independence. But the scars and prejudices of colonialism slice deep.

“The nature of relations between Africa and countries with a colonial past should be re-imagined, to transform the painful history of colonization into opportunities,” said Evariste Ndayishimiye of Burundi, once run by Germany and then Belgium.

But he stressed: “We should not forget the spirit of the conquests to enslave Africa and the strong resistance of the people of Africa to defend themselves against invasion, or to liberate themselves from the colonial yoke that mowed down millions of human lives in Africa and left injuries and wounds that struggle to heal.”

Instead of big-power bullying and small powers pleading for outside help, Vice President Mohamed Juldeh Jalloh of ex-British colony Sierra Leone called for a new era of “mutual respect and partnership” instead.

“If we are to remain true to the fundamental principles of the United Nations that is fit for purpose, then it becomes absolutely necessary to relegate the chapter of colonialism to history within the period 2021-2030,” he said.

Some former colonial powers touched upon that part of their past, but none expressly renounced it in this year’s speeches to the U.N.

EU Council President Charles Michel, whose native Belgium has faced protests and soul-searching this year over the 19th century king who colonized swaths of Africa, said: “Our two continents have never been so interdependent, for better or for worse.”

French President Emmanuel Macron, who has refused to take down statues of colonial leaders, described their era as the “second wave” of globalization: “It was globalization through trade, the first openings, but also the routes of slavery, exploitation, the development of some, the enslavement of others, the first population displacements and a reorganization of our world in the light of these dominions.”

Dutch Prime Minister Mark Rutte simply noted “the European and Caribbean parts of the Kingdom of the Netherlands,” but left it at that.

The United States’ complicated history came in for criticism too, notably from rivals Cuba, Venezuela and Iran.

Cuba’s Foreign Minister Bruno Rodriguez Parrilla championed Caribbean nations’ efforts to demand reparations for “the horrors of slavery and the slave trade, in a world where racial discrimination and the repression against Afro-descendant communities have been on the rise.”

Multiple leaders mentioned territorial disputes that stem from colonial times — spats that occupy a big part of the docket at the U.N.’s international courts.

The prime minister of Mauritius spoke in front of a map that included the Britain-controlled Chagos Archipelago as part of its territory. Pravind Jugnauth argued that “the decolonization of Mauritius remains incomplete,” and urged the U.N. to intervene.

The leader of Micronesia — colonized in turns by Spain, Germany and Japan, and now dependent on the U.S. for its defense and financial support — described his South Pacific archipelago as “a product of multilateralism” that’s still working toward self-sufficiency 33 years after becoming a free state.

Prime Minister Ralph Gonsalves of St. Vincent and the Grenadines decried “the legacies of underdevelopment left in the wake of European settler colonialism, native genocide, the enslavement of Africans” and warned that “the disastrous economic implications of a global COVID-19 recession threaten to stymie our advances.”

Barbados made news this month seeking to drop Britain’s Queen Elizabeth II as its head of state, and Prime Minister Mia Mottley in her speech marking the U.N.’s 75th anniversary noted that at its founding, “The vast majority of development states had no seat and no say. ... Fundamental decisions about the global security, economic and financial order were taken on their behalf, on our behalf, but not necessarily in our best interests, by the colonial powers of the day.”