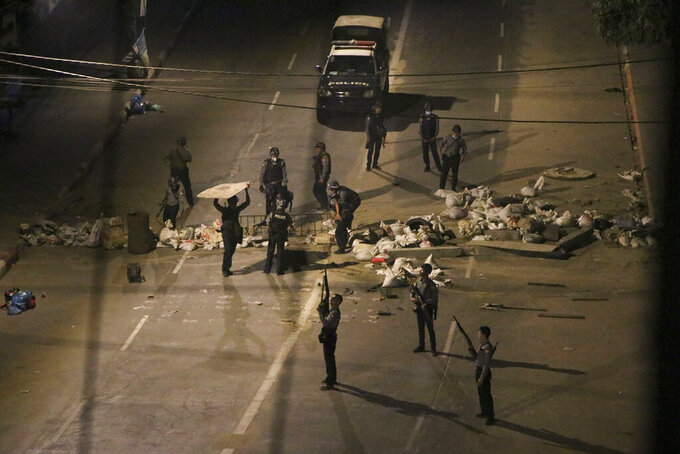 FILE - In this March 21, 2021, file photo, armed police remove makeshift blockages set up by protesters as they patrol streets in downtown Yangon, Myanmar. Political turmoil and disruptions following the coup in Myanmar could undo years of progress and double the number of its people living in poverty to nearly half the population, a United Nations report said Friday, April 30, 2021. (AP Photo/File)

BANGKOK (AP) — Political turmoil and disruptions following the coup in Myanmar could undo years of progress and double the number of its people living in poverty to nearly half the population, a United Nations report said Friday.

The report by the U.N. Development Program, or UNDP, said 12 million people could fall into dire economic straits as businesses remain shuttered in a standoff between the junta and a mass civil disobedience movement.

“The hardest hit will be poor urban populations and the worst affected will be female heads of household," Kanni Wignaraja, the UNDP's assistant secretary-general for the region, told The Associated Press via a Zoom recording.

The Feb. 1 coup wrested power from the elected government of Aung San Suu Kyi, who has been detained along with more than 3,400 other people. Since then, the military has severely restricted internet access and gradually stepped up violent repression of protests. More than 700 have died in the violence.

Many factories, offices, banks and other facilities have closed and trade has been disrupted by work stoppages and other disruptions at ports, economists and others familiar with the situation inside Myanmar say. That has worsened already bleak conditions due to the pandemic, which have caused people affected to lose an average of about half their wages.

The UNDP said conditions could deteriorate by early 2022 to a level of poverty last seen in 2005. A more optimistic assessment would require a rapid end to the political crisis, which looks unlikely.

The economy grew rapidly after a previous military regime initiated a partial transition to a civilian government in 2011 while keeping control of key ministries and industries and seats in parliament.

Foreign investment in garment manufacturing, tourism and other industries helped create millions of jobs, providing a lifeline of support for many families living in rural areas.

But that progress has ground to a halt as the coup added to troubles from the pandemic. People displaced by ethnic conflicts and the urban poor are the most vulnerable, and many will cope by going hungry, the UNDP said. It put the poverty line at 2,385 Myanmar kyats (about $1.50 a day).

“With the effects of the political crisis, we could see these gains removed in just a few months," Wignaraja said.

The research agency Fitch Solutions has forecast that the economy will contract 20% in the current fiscal year, which ends in September. In a report released last week, economist Jason Yek noted that food insecurity is rising due to hoarding and inflation, while people struggle to access cash to pay for necessities due to the closure and cash limits put on ATMs.

A weakening of the Myanmar kyat to about 1,600 kyat per dollar from about 1,350 kyat before the coup also hinders the country's ability to import much needed medicines and other supplies.

“We really cannot rule out any worst-case scenario," Yek said in an online briefing.

So far, foreign governments and businesses have sought to levy pressure on Gen. Min Aung Hlaing and others in the junta through targeted sanctions meant to cut off financial support to the army, or Tatmadaw.

The UNDP report's findings suggest that ordinary people already are suffering regardless of sanctions.

The magazine Nikkei Asia Review said Thursday that the group Independent Economists for Myanmar issued a report urging the targeting of sources of foreign exchange, such as Myanmar's exports of natural gas, its biggest revenue earner, and of gems and jade.

Sanctions could freeze deposits linked to the state-owned Myanmar Foreign Trade Bank and Myanmar Investment and Commercial Bank, it said.

It said targeting the junta's sources of hard currency with international sanctions could reduce its revenues by roughly $2 billion annually.

It said the military was prioritizing spending on weapons and security operations over providing desperately needed public services.

The U.S. recently ordered sanctions against the company that controls most of Myanmar's gems, pearls and jade sales, though a huge share of that trade is done illicitly.

So far, foreign energy companies involved in Myanmar's natural gas industry have resisted calls for them to stop paying revenues to the government, saying such moves might endanger their employees and hurt access to already scarce electricity.