UN urges more vaccines for Africa, with only 2 percent now 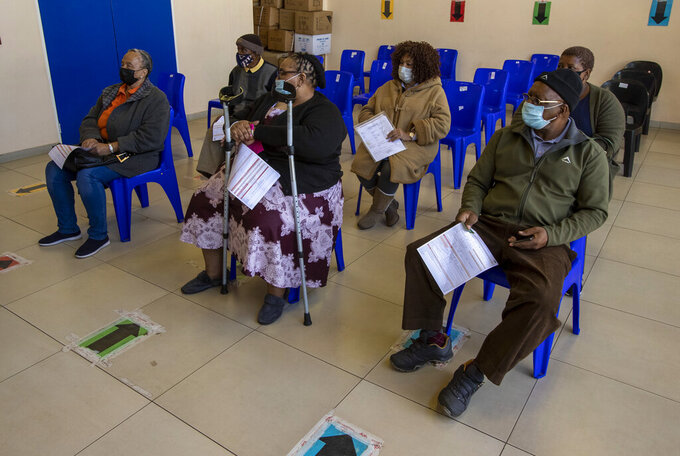 Elderly people wearing protective masks line up to be registered to receive their first dose of the Pfizer COVID-19 vaccine at a vaccination centre in Chris Hani Baragwanath Academic Hospital, in Soweto, South Africa, Monday, May 17, 2021. South Africa has started its mass vaccination drive with the goal of inoculating nearly 5 million citizens aged 60 and above by the end of June. (AP Photo/Themba Hadebe)

UNITED NATIONS (AP) — The U.N. Security Council called for accelerated availability of coronavirus vaccines for Africa on Wednesday, expressing concern that the continent has received only about 2% of all doses administered globally.

The call came in a presidential statement approved by all 15 members at a council meeting on promoting post-pandemic recovery in Africa and addressing the root causes of conflict on the continent. It reiterated the need for “equitable access to quality, safe, efficacious, and affordable COVID-19 diagnostics, therapeutics, medicines and vaccinations to all.”

The statement urged “increased and accelerated donation of safe and effective vaccine doses from developed economies” and others with supplies to African countries in need, especially through the World Health Organization’s ACT-Accelerator program, which includes the COVAX facility to buy and deliver vaccines for the world’s poorest countries.

The council also acknowledged that discussions are underway on waiving intellectual property protections for coronavirus vaccines aimed at providing vaccinations to Africans and all others in need.

U.N. Secretary-General Antonio Guterres told the council meeting, organized by China, that the limited supply and access to vaccines is hampering and delaying Africa’s recovery from the pandemic.

“Out of 1.4 billion doses administered around the world today, only 24 million have reached Africa -- less than two percent,” he said.

Guterres said that “equitable and sustainable vaccine roll-out worldwide is the quickest path towards a fast and fair recovery.”

Moussa Faki Mahamat, chair of the African Union Commission, told the virtual meeting that “today the biggest challenge Africa is facing is the vaccine issue.”

He said the trend continues to show a rising number of Africans infected with the coronavirus and an increase in fatalities from COVID-19, the disease that can be caused by the virus.

“There is an urgent need to put an end to the vaccine protectionism and vaccine nationalism” threatening vaccinations in low-income and fragile countries, he said.

Mahamat said the pandemic will continue to have “a profound impact” on economic and social development in Africa, especially in conflict-affected countries and those in political turmoil.

“It is a very big mistake to think that the world will be secure (while) the African continent is still lacking protection against the virus and its variants,” he said.

Achim Steiner, administrator of the U.N. Development Program, said African countries currently account for “a small fraction of the world’s reported COVID-19 cases and fatalities relative to its population." This is partly due to early efforts by many African governments and institutions in tackling the pandemic, he said.

“However, the small percentages mask the crippling financial, social, and political implications of COVID-19 on the continent,” Steiner said.

He noted some 40 million Africans have been pushed back into extreme poverty and said UNDP research this year indicates that Africans will account for approximately six out of every 10 people around the globe who will become poor.

Steiner called Africa “a continent of unparalleled promise” — home to a third of global mineral reserves, nearly two-thirds of the world’s arable land and the second-largest rainforest. He said 40% of the world’s solar energy potential is in Africa and it is the continent of youth, with 70% of the population in many countries under age 30.

“Yet much of this immense potential has yet to be realized,” Steiner said.

He urged relief from debts crippling recovery in many African countries, building back both better and “greener” from the pandemic, and focusing on promoting jobs, trade and good governance.

“In this regard, 20 African countries are facing the risk of collapse because of the burden of debt,” he said.

Guterres said economic growth in African has slowed to an estimated 3.4% in 2021, compared to 6% globally, while remittances from overseas workers are drying up and debt is mounting.

“In the name of fighting the crisis, some governments have restricted democratic processes and civic space,” Guterres said. “In several countries, the pandemic has gone hand in hand with divisive rhetoric, hate speech, incitements to violence and harmful misinformation, which has exacerbated divisions and further eroded trust.”