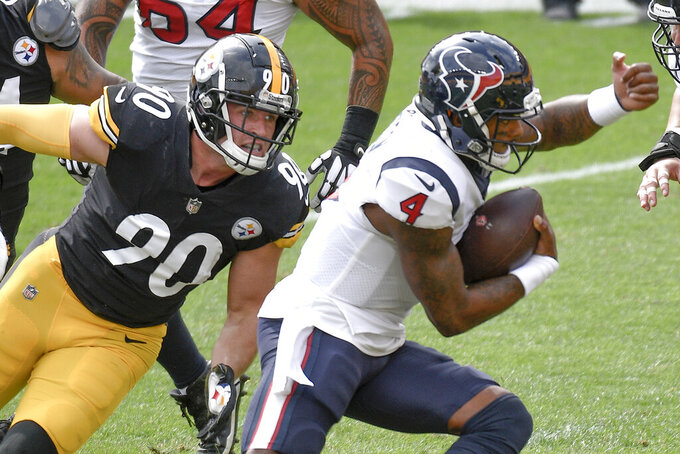 Houston Texans quarterback Deshaun Watson (4) gets away from Pittsburgh Steelers outside linebacker T.J. Watt (90) during the first half of an NFL football game, Sunday, Sept. 27, 2020, in Pittsburgh. (AP Photo/Don Wright)

The NFL's decision to reschedule the Pittsburgh Steelers' visit to Tennessee due to a COVID-19 outbreak among the Titans means the Steelers will play 13 straight games to end the regular season. Asked if he's concerned about the prospect of three months without a break, the league's third-longest tenured head coach did not mince his words.

“We do not care,” Tomlin said, pausing ever so slightly between each word for emphasis.

From the moment the Steelers and the rest of the league reported for training camp in late July, Tomlin has steadfastly maintained the need to stay flexible while trying to navigate a 16-game slate in the middle of a pandemic. Rather than grouse about the disruption to his team's schedule now that their bye originally planned for Week 8 has changed, Tomlin opted instead to pivot.

“We have every intention of getting the appropriate rest and taking care of those that need to be mended in any way,” he said. "More than anything, just kicking back and gaining a little bit of perspective in terms of watching others work."

And maybe take stock of his own club's progress too. The Steelers are off to a 3-0 start for the first time in a decade, albeit against teams that entered October a combined 0-9. For a team that has sometimes struggled against also-rans, the fact Pittsburgh hasn't stubbed its toe yet is promising. So is the play of Ben Roethlisberger, who appears to be just fine in his return from a right elbow injury that cost him all but six quarters for the 2019 season.

The 38-year-old quarterback has thrown seven touchdowns against one interception, is completing 67% of his passes and is doing it by keeping everyone involved. Ten Steelers have caught passes through three games. While the offense's overall numbers might not be as eye-popping as in 2018, when Roethlisberger led the NFL in passing while slinging it to wide receiver JuJu Smith-Schuster and Antonio Brown — both of whom finished with over 100 receptions — there's also a decided lack of drama.

Unlike the height of the Brown Era, no one is publicly politicking for more touches even though both Smith-Schuster and RB James Conner are in contract years. Roethlisberger admits he's not intentionally trying to spread the wealth; he also hinted that he's no longer in a position where he feels he has to throw the ball certain places just to keep the peace.

“You have to be careful, because if you get caught in that game, you’ll try to force someone the ball,” Roethlisberger said. “I’ve done it in the past, and sometimes, it leads to some bad things.”

There have been few “bad things” through the first three weeks of 2020. The Steelers haven't really beaten themselves, and with one of the league's top defenses on the other side of the ball, the offense doesn't have to turn games into a track meet to win. Three touchdowns a week should be enough to keep Pittsburgh competitive.

“There’s a lot of guys who have their hand in the pile, if you will, and are making plays for us,” Roethlisberger said. “And it seems like it’s someone different every week. We’ve got some guys that we can depend on all the time and some new guys are making plays.”

Tomlin has made an effort to smartly integrate rookie wide receiver Chase Claypool and rookie running back Anthony McFarland Jr. into the lineup slowly. Claypool has played in about 50% of the offensive snaps while also being a standout on special teams. McFarland worked his way into the running back rotation and racked up 42 yards in seven carries in last week's victory over Houston.

Their roles only figure to increase provided they stay healthy, a development that should make the Steelers even more difficult to game plan against down the road. Five players touched the ball during the 12-play go-ahead fourth-quarter touchdown drive against the Texans, and that doesn't include a pass targeted for Claypool that fell incomplete.

It's a recipe that's kept the Steelers undefeated, even if it's means no skill position player is on track for a career year. Smith-Schuster's 17 receptions lead the team but rank 15th in the league. Conner is ninth in yards rushing, numbers skewed a bit by a 59-yard sprint in the final minute against the Broncos. Yet the vibe remains loose and without ego. Winning has a way of doing that.

“I would say that the biggest stat is 3-0,” Roethlisberger said. “I don’t think that anybody cares about their stats right now. No one is complaining.”

Doing so would be pointless. This season's bye week was always going to be different than any other. The four-day break most teams receive typically includes players darting to various points of the globe for a brief respite before returning to work for the stretch run. Not in 2020. The Steelers must stick around the city so they can continue daily COVID-19 tests. It's a small sacrifice with so much at stake.

When they report for work on Monday, it will be on to Week 5 and a visit from cross-state rival Philadelphia. At least that's the plan for now. If there's one thing the Steelers have learned over the last six months, it's that taking anything for granted is unwise.

“We are trying to get better every day, and that is our approach to business,” Tomlin said. “Every day we take the field, we have areas of improvement whether it is skill development, whether it is an understanding of the game relative to the game or just collective cohesion."