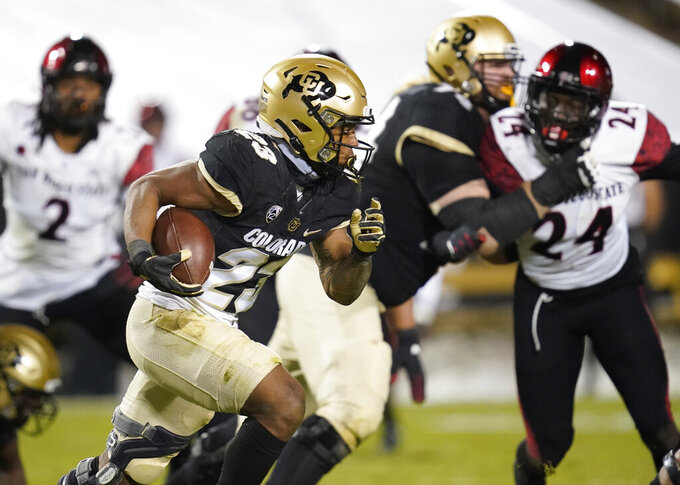 Colorado senior wide receiver K.D. Nixon is savoring the Buffaloes' 3-0 start to the season and relevance in the Pac-12 race.

He's also been around long enough to know this isn't the time to get comfortable. Especially in 2020.

Colorado travels to face winless Arizona (0-3) on Saturday in a matchup that looks very favorable for the Buffaloes. But Dixon cited the COVID-19 virus and the memory of his sophomore season — when Colorado started 5-0 and then lost its next seven games — as two big reasons he's not celebrating anything just yet.

“Knowing that it can be taken any week, you've got to stay focused,” Nixon said. “You can't ever get too happy or too complacent. We're just going to keep pushing, not even worrying about a bowl game or a Pac-12 championship, and keep pushing to be 1-0 every week.”

Arizona is coming off a 27-10 loss to UCLA that was difficult game from the start. Starting quarterback Grant Gunnell hurt his shoulder on the first play from scrimmage and freshman Will Plummer had to take over for the rest of his game. Plummer completed 17 of 35 passes for 151 yards and threw two interceptions. He also ran for 49 yards.

Arizona coach Kevin Sumlin said he's not sure if Gunnell will play Saturday. Sumlin said Plummer did a good enough job against UCLA that he's confident in either quarterback against Colorado.

“For a guy who has never played at this level, to go out there and do what he did, I thought it was a pretty good performance," Sumlin said. “Could it have been better? Yeah. There were mistakes he made, but he made plays with his legs."

“It's easy to fall into that trap,” Dorrell said. “You look at they're 0-3 but offensively they can be very explosive. They've got good skill players."

Colorado is one of two remaining undefeated teams in the Pac-12 West along with USC. The Trojans have a half-game lead in the division because they're 3-0 in the conference and the Buffaloes are 2-0.

Colorado's game against USC on Nov. 28 was postponed because of virus issues in the USC program. The Buffaloes found a replacement game against San Diego State and won 20-10. Colorado is the only Pac-12 program to play a nonconference opponent this season.

Despite the strange circumstances of 2020, Dorrell feels like his program's in a good spot.

“I like where we're heading,” Dorrell said. “These next few games are really important, all of them are important as we know, but we're sitting in a pretty good position in the conference. We've got to start taking care of our own business.”

SUCCESS VS. THE BUFFALOES

Arizona's Sumlin is in his third season leading the program and has a mediocre 9-18 record over that span, but some of his success has come against Colorado.

The Wildcats have a 2-0 record vs. the Buffaloes during Sumlin's tenure, including a 42-34 win in 2018 and a 35-30 victory last season. Arizona could use some good mojo: The program has lost 10 straight games overall dating back to last season.

The Buffaloes have scored in all 12 quarters through their first three games, which is the first time that's happened since 1998. Quarterback Sam Noyer has completed 62% of his passes for 650 yards, four touchdowns and two interceptions through three games. He's also run for four touchdowns. Jarek Broussard leads the team with 432 yards rushing.

One big reason Arizona's off to an 0-3 start is its inability to stop the run. Opponents have run for 229 yards per game in the three losses.

UCLA was the latest team to take advantage, running for 281 yards in the 27-10 win. Sumlin said his defensive staff did a good job of making adjustments at halftime to hold the Bruins to seven points in the second half but the damage had been done.

“We missed too many tackles, that's something that's a work in progress,” Sumlin said.