University of Texas students to return to campus in the fall 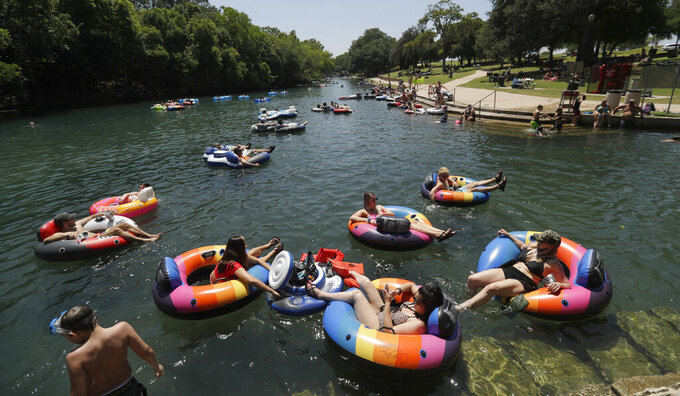 Tubers float the Comal River in New Braunfels, Texas, Wednesday, May 20, 2020. As parks reopen following closures due to the COVID-19 pandemic, many Texans are returning to the outdoors. (AP Photo/Eric Gay)

AUSTIN, Texas (AP) — University of Texas students will return to campus for the fall semester with classes from late August until Thanksgiving, and finals to be conducted online after the holiday, the school announced said Wednesday.

The school's 50,000 students were scattered from campus in March and classes were moved online for the rest of the semester and for summer school because of the coronavirus pandemic.

Under the new plan, campus will be open for the regularly scheduled Aug. 26 start of the fall semester. Students will not return to campus after the Thanksgiving break and will instead take finals online.

“With COVID-19 still expected to be active this fall, we hope to avoid the possibility of students becoming infected during the Thanksgiving break and then spreading the virus to classmates upon their return after Thanksgiving,” said the announcement from outgoing President Greg Fenves and interim President Jay Hartzell.

The Texas announcement did not detail any plans on campus social distancing measures in classrooms and residence halls, or plans for the upcoming college football season. The message said those details will be announced later.

Texas reported 1,411 new COVID-19 cases on Wednesday as the total cases reported since the state’s first one was reported March 17 climbed to 51,323. The state reported 50 new deaths, bringing the overall death toll to 1,419, according to the Texas Department of State Health Services. The true number is likely higher because many people have not been tested, and studies suggest people can be infected and not feel sick.

An employee for a popular Texas ice cream maker has tested positive for COVID-19, the company said.

The employee, who works at Blue Bell Creameries’ facility in Brenham, has been quarantined and is under medical supervision, according to a company statement. Brenham is located about 70 miles (112.65 kilometers) northwest of Houston.

The area where the employee worked has been deep cleaned and disinfected, Blue Bell said.

“We have taken all necessary steps to identify and notify employees of our company who worked closely with the employee. These employees have been asked to self-quarantine and monitor for any symptoms for 14 days,” the company said.

Operations at the facility in Brenham have not been impacted, the company said.

Food plants across the country, particularly meat packing plants, have been a concern for officials trying to contain the spread of the coronavirus. Such facilities have been the sites of outbreaks because people stand next to each other on production lines and congregate in crowded locker rooms and cafeterias.

In 2015, Blue Bell recalled its ice cream and halted sales after it was linked to 10 listeria cases in four states, including three deaths in Kansas.

Earlier this month, the U.S. Justice Department announced Blue Bell had pleaded guilty to distributing contaminated goods and its former CEO has been charged with conspiracy and attempted wire fraud in connection with the listeria outbreak.