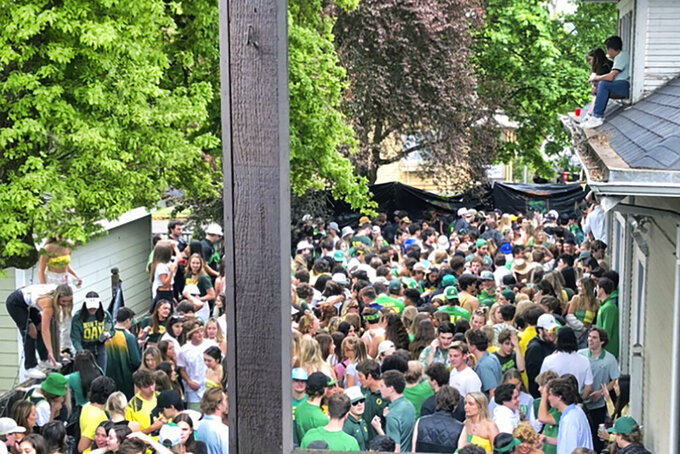 In this May 1, 2021 photo provided by Mojo Hill, University of Oregon students and fans gathering at a cramped outdoor party in Eugene, Ore. The University of Oregon says it is "disappointed" to see the photo of more than 100 students at the same time that the region weathers a spike in cases of COVID-19 and businesses endure new restrictions. None of the packed party-goers in the photo are wearing masks. Eugene police responded to the party Saturday after calls about the large crowd, loud music and about people urinating in the front yard. (Mojo Hill via AP)

EUGENE, Ore. (AP) — The University of Oregon says it is “disappointed” to learn about large crowds gathering for parties during the Ducks spring game as the region weathers a spike in cases of COVID-19 and businesses endure new restrictions.

Lane County, where the university is located, moved back to “extreme risk” on Friday, meaning that bars and restaurants were limited to outdoor dining only and normal social gathering places were off-limits. Capacity at a spring game for the Ducks football team at Autzen Stadium had been set at 15% but the new restrictions meant no spectators or tailgaters were allowed.

Instead, students packed into parties at private homes. Photos and videos of several large parties Saturday circulated on social media, showing people standing shoulder-to-shoulder and without masks, The Register-Guard reported.

The University of Oregon issued a statement late Sunday condemning the behavior but said there was little it could do about parties at private houses off campus.

“The university has worked very hard to educate students about the serious COVID-19 health risks of gathering in groups without masks,” the statement said. “This behavior is not representative of the majority of UO students, who we have seen work diligently to follow health guidelines.”

Some residents called the Eugene Police Department and officers assisted the university in dispersing the partygoers. Callers reported loud music and students urinating in the front yard of one home where one student witness snapped a photo that circulated widely on social media, The Register Guard reported.

One woman fell off the roof and was taken to the hospital by ambulance.

Student Joseph Hill, who took the picture, said there was a party of similar size a few nights before at the same address.

Hill's Twitter post quickly got a lot of reaction online, from students, alumni and professors who commented that they were disappointed in these students, some who they recognized.

“There were a lot of those photo-truther people,” Hill told the newspaper. “Even now there are people still tweeting and saying, ‘Oh, this is from 2015.’ I was pretty shocked at how many people were insisting that it was an old photo, and people were able to disprove them pretty quickly in the comments."

But not everyone was so defensive, he said.

“There’s also been a lot of students reacting saying they’re disappointed in their peers. There’s some people even being really dramatic and saying, ‘If you’re in the photo I will not be friends with you,’ and stuff like that.”