US calls on Afghans to set aside disputes, focus on virus 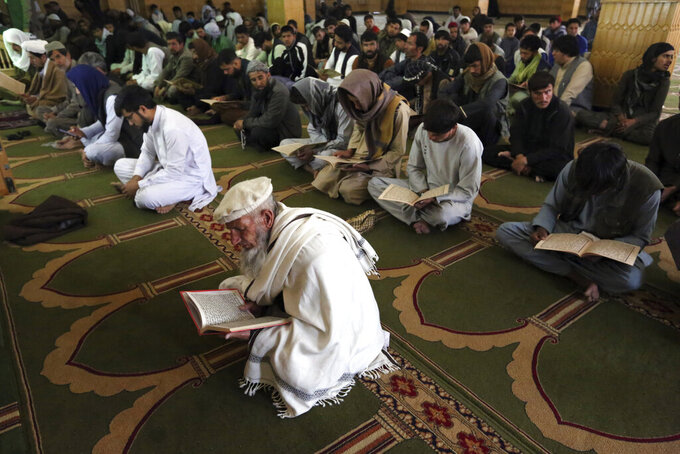 Muslim men read the Quran during the first day of the holy fasting month of Ramadan at a mosque in Kabul, Afghanistan, Friday, April 24, 2020. Millions of Muslims have started the holiest month on the Islamic calendar under the coronavirus lockdown or strict social restrictions, deepening their anxiety over the disease. (AP Photo/Rahmat Gul)

ISLAMABAD (AP) — The U.S. peace envoy to Afghanistan on Sunday called on the country's feuding leaders to set their differences aside to combat the coronavirus pandemic and advance a stalled peace agreement signed with the Taliban earlier this year.

“The well-being of the Afghan people and the country itself depend on all parties devoting their full energies to fighting the COVID-19 pandemic, the shared enemy of all,” Zalmay Khalilzad tweeted early Sunday.

He said Afghan President Ashraf Ghani and his rival Abdullah Abdullah, who each declared himself the victor in September's election, should “put the interest of the country ahead of their own" during the Muslim holy month of Ramadan, which began last week.

He urged the government and the Taliban to carry out a prisoner exchange that was part of the U.S.-Taliban peace agreement signed in February. The agreement had called for the release of 5,000 Taliban prisoners and 1,000 government personnel held by the insurgents.

Taliban spokesman Zabihullah Mujahed said in a statement Sunday that the insurgent group was living up to its side of the agreement, and that it was willing to negotiate a countrywide cease-fire in intra-Afghan talks. Those negotiations were supposed to have begun within 10 days of the Feb. 29 deal but are still on hold because of the political bickering in Kabul.

The Taliban are continuing to attack security outposts, even as the U.S. and NATO proceed with a full troop withdrawal that is set to be completed next year.

The Taliban have carried out 2,804 attacks since the agreement was signed, Jawed Faisal, spokesman for the National Security Adviser’s office, said Saturday. However, the Taliban have not attacked U.S. or NATO troops, who say they will continue to aid Afghan forces.

Afghanistan has meanwhile reported 1,463 infections and 47 deaths from the new coronavirus.

The virus causes mild to moderate symptoms in most patients, who recover within a few weeks. But it is highly contagious and can cause severe illness or death, particularly in older patients or those with underlying health problems.

Afghanistan's health care system has been heavily degraded by decades of war and would be ill-equipped to contain a major outbreak. Testing has been sporadic, in part because of local stigma surrounding the disease.

Shar Mohammad Ahmadi, 30, contracted the virus from a nephew who worked as a nurse at a hospital in the southern Kandahar province. When he went to the hospital to be tested, “people were laughing at us,” he said.

"Everyone covered their faces and were making fun of us. It was very painful.”