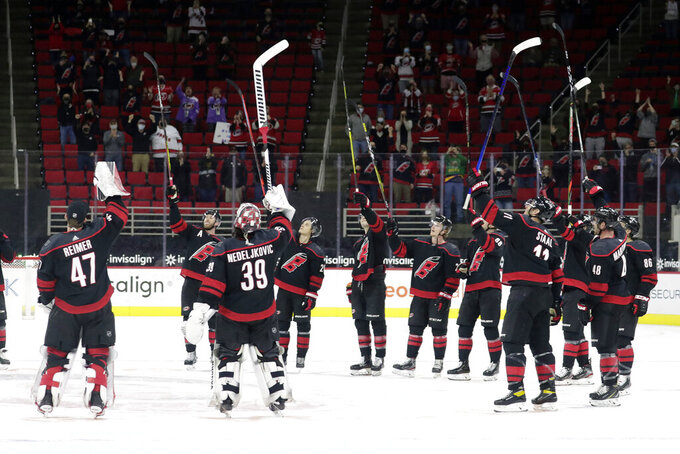 The Carolina Hurricanes salute the fans, who returned to PNC Arena for the first time this season, after a win over the Detroit Red Wings in an NHL hockey game in Raleigh, N.C., Thursday, March 4, 2021. AP Photo/Chris Seward)

A year after the pandemic temporarily shut down the NHL, a handful of roadblocks remain to handing out the Stanley Cup again this season — including the U.S.-Canada border.

The border remains closed to nonessential travel, an issue the NHL addressed before the 2021 season began in January by realigning its divisions. All seven teams in the North Division are based in Canada and they play against only each other through the first two rounds of the postseason.

But the league has a decision looming on what to do when a Canadian team faces a U.S. opponent in the third round of the playoffs. Talks are ongoing with Canadian government officials, though nothing needs to be settled yet since cross-border play won't happen until mid-June.

“We’ve got a little bit of time to deal with this,” Deputy Commissioner Bill Daly said during a video interview Thursday. “I can’t certainly promise any result, and we’ll work through the process and we’ll see what the result is and we’ll respond appropriately. But in terms of timeline, I don’t think there’s any kind of firm deadline that we have to meet to accomplish a change in plans if that’s necessary.”

One possibility includes the North Division champion that reaches the league's final four playing its “home” games in a U.S. city. Or there could be some type of modified quarantine when teams cross the border.

Commissioner Gary Bettman said the NHL isn’t planning to hold the playoffs in any kind of a bubble like it did in Toronto and Edmonton last year but it could do something similar to that if necessary to accommodate Canadian regulations.

“We are going to try and maintain our flexibility and our agility,” Bettman said, "and we will be respectful of the process.”

The league has also said it won't jump the line for vaccines, but some machinations are ongoing about what could happen once inoculations are available to the general public. D

“Like everything else, it’s kind of a work in progress, and I think it’s going to evolve in different stages based on the introduction of the vaccine,” said Daly, who believes several players with pre-existing conditions have already been vaccinated. “At some point we’ll get into a position, I would think and I would hope, where there’s widespread vaccination. I think our response to that will be in stages, as well, as to what that means and how we evolve our protocols.”

Those protocols have already changed this season, helping to cut the number of players on the COVID-19 protocol list from a season-high 59 on Feb. 12 to four on Wednesday. A total of 138 players have spent at least one day on the list. A total of 35 games have been postponed for virus-related reasons.

“We’ve navigated through the first two months of this season under extremely challenging conditions, and we’ve been on this every day with the medical experts and enhancing our protocols, and it’s gotten us to a better place,” Bettman said.

In matters more in the NHL's control, Daly said the draft “more likely than not” will go on as scheduled July 23-24, despite concerns from some team executives about many prospects not playing this season.