US contracts to buy homes decline, still a January record 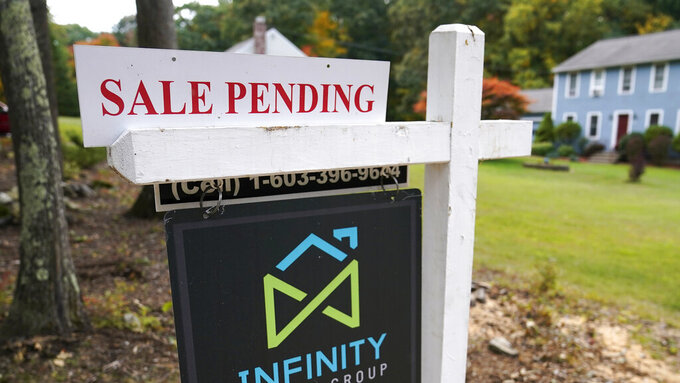 FILE - In this Sept. 29, 2020 file photo, a sale pending sign is displayed outside a residential home for sale in East Derry, N.H. The number of Americans signing contracts to buy homes fell for the second straight month as lack of available homes continue to stifle house hunters. The National Association of Realtors said Monday, Nov. 30 that its index of pending sales fell 1.1%, to 128.9 in October, down from a reading of 130.3 in September. (AP Photo/Charles Krupa, File)

SILVER SPRING, Md. (AP) — The number of Americans who signed contracts to buy homes declined again with the number of properties for sale not matching the surging demand in the U.S.

The National Association of Realtors’ index of pending home sales fell 2.8% to 122.8, which was still a record high for the month. December's index, which was also a record high, was revised upward.

Despite the recent declines, contract signings are still 13% ahead of where they were last year at this point, a sign that the housing market remains strong despite the widespread economic damage caused by the pandemic.

Contract signings are considered a barometer of purchases that will take place the next one to two months as the spring buying season opens.

Regionally, the West led the declines with a 7.8% drop, followed by the Northeast's 7.4% retreat. Contract signings fell 0.9% in the Midwest and were up a slight 0.1% in the South. However, pending home sales are still up significantly in all four regions compared with last year.

Prospective buyers are jumping into the market to try and take advantage of historically low interest rates, but prices for both existing and new homes have risen significantly the past year with the number available close to record lows.

The supply of new homes on the market could get a boost this spring. The Commerce Department reported last week that applications for building permits spiked 10.4% in January and according to the Realtors group, there have been eight straight months of increases for single-family home building permits.