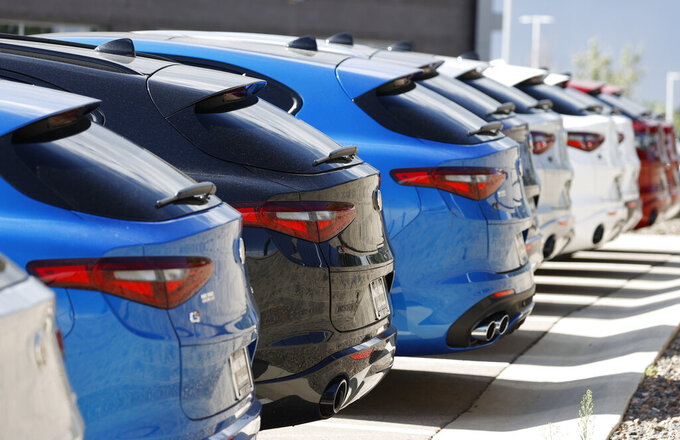 A long row of unsold 2020 Stelvio sports-utility vehicles sits at an Alfa Romeo dealership, Sunday, July 19, 2020, in Highlands Ranch, Colo. U.S. consumers took out more auto and student loans in October 2020, but cut back on credit card borrowing, a sign that they remain cautious about spending amid a spike in coronavirus cases. (AP Photo/David Zalubowski)

WASHINGTON (AP) — U.S. consumers took out more auto and student loans in October, but cut back on credit card borrowing, a sign that they remain cautious about spending amid a spike in virus cases.

The Federal Reserve said Monday that consumer borrowing rose 2.1% in October to $4.16 trillion, pushed higher by a 4.8% jump in a category mostly made up of student and auto loans. Credit card borrowing fell 6.7%.

The figures suggest that consumers haven't fully recovered from the pandemic recession. Overall borrowing is still 1% below its pre-pandemic level. Outstanding balances on credit cards are still down nearly 11% compared with their level in February, before the pandemic intensified.

The economy rebounded quickly in the July-September quarter from the spring business shutdowns, but growth has slowed in the fall. Consumer spending rose in October, according to the Commerce Department, but that increase was the smallest since April, which was the peak of business closures.

Consumer confidence fell in November, according to a survey by the Conference Board, potentially discouraging spending in the coming months.

Economists closely watch consumer borrowing patterns for signals of how willing households are to take on more debt to finance consumer spending, which accounts for two-thirds of economic activity.

There have been other signs of slower growth. On Friday, the government said that hiring slowed in November to its weakest pace since the pandemic struck. The unemployment rate fell to 6.7%, from 6.9%, but mostly because many Americans gave up on searching for work and weren't counted as unemployed.