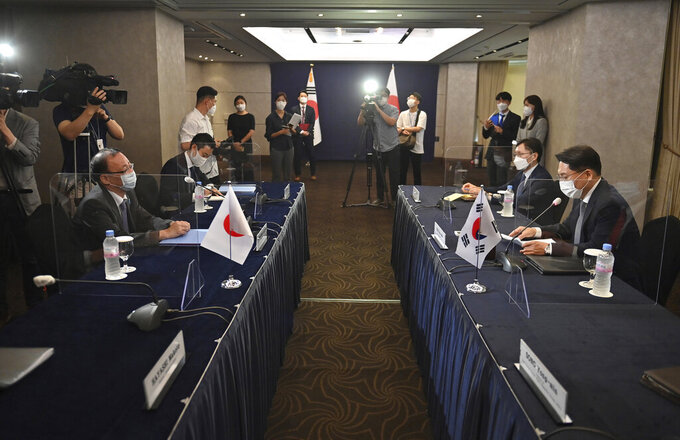 South Korea's Special Representative for Korean Peninsula Peace and Security Affairs Noh Kyu-duk, right, meets with Director-General of the Asian and Oceanian Affairs Bureau of the Ministry of Foreign Affairs of Japan Takehiro Funakoshi during their bilateral meeting at a hotel in Seoul, Monday, June 21, 2021. (Jung Yeon-Je/Pool Photo via AP)

SEOUL, South Korea (AP) — President Joe Biden’s special envoy for North Korea said Monday he hopes to see a positive reaction from the North soon on U.S. offers for talks after North Korea's leader ordered officials to prepare for both dialogue and confrontation.

Sung Kim, Biden’s special representative for North Korea, was in Seoul to speak with South Korean and Japanese officials about the United States’ stalled diplomacy with the North over its nuclear program and U.S.-led sanctions.

The U.S. envoy said the allies took note of the North Korean leader’s comments and are hoping the North will respond positively to the proposal of a meeting.

“We continue to hope that the DPRK will respond positively to our outreach and our offer to meet anywhere, anytime without preconditions,” Sung Kim said during his meeting with the South Korean and Japanese nuclear envoys, Noh Kyu-duk and Takehiro Funakoshi. He was referring to the North’s official name, the Democratic People’s Republic of Korea.

Even as it offers talks, Kim stressed that the Biden administration will continue to pressure Pyongyang with sanctions over its nuclear ambitions. In comments possibly directed at China, the North’s major ally and economic lifeline, Kim said Washington will urge “all U.N. member states, especially U.N. Security Council members, to do the same, to address the threat posed" by the North.

South Korea’s Foreign Ministry said the officials from the three countries reaffirmed a coordinated approach toward North Korea and shared commitment to work toward a quick resumption of dialogue. Kim later met South Korean Foreign Minister Chung Eui-yong, who called for “airtight coordination” between Washington and Seoul on diplomatic efforts to stabilize peace on the Korean Peninsula.

North Korea’s economic setbacks followed the collapse of Kim Jong Un’s ambitious summitry with then-President Donald Trump in 2019, when the Americans rejected the North Koreans’ demands for major sanctions relief in exchange for a partial surrender of their nuclear capabilities.

The North Korean leader in recent political speeches has threatened to bolster his nuclear deterrent and claimed that the fate of diplomacy and bilateral relations depends on whether Washington abandons what he calls hostile policies.

U.S. officials have suggested Biden would take the middle ground between Trump’s direct dealings with Kim and President Barack Obama’s policy of “strategic patience.” But some experts say the North likely must take concrete steps toward denuclearization before the Biden administration would ease any sanctions.

South Korea, which is eager for inter-Korean engagement, has expressed optimism about a quick resumption of diplomacy.

Seoul’s Unification Ministry said the North Korean leader's comments during a ruling party meeting last week, where he said he expected both dialogue and confrontation with the United States, demonstrated a flexibility toward diplomacy.

But others saw the comments as merely a reiteration of Pyongyang’s wait-and-see stance of insisting Washington budge and offer concessions first.

While Kim urged officials to boost agricultural production and brace for prolonged COVID-19 restrictions, none of the decisions reported after the party meeting seemed directly related to facilitating talks with the United States.

While displaying an openness to talks, the Biden administration has provided little detail about its policy on North Korea beyond a long-term principle of taking a “calibrated and practical approach” on diplomacy while simultaneously upholding sanctions against the country.

Tae Yongho, a former North Korean diplomat who defected and was elected a South Korean lawmaker, posted on Facebook that Kim’s comments at the party meeting seemed tailored to mirror what the Biden administration has said about the North.

“Advocates of engagement see Kim Jong Un’s recent mention of dialogue as a sign North Korea is opening the door for talks, but Pyongyang has not yet expressed a willingness for working-level negotiations on denuclearization,” said Leif-Eric Easley, a professor of international studies at Ewha Womans University in Seoul.

He said the North may return to negotiations only after demonstrating its strength with post-pandemic economic recovery and provocative military tests, which could possibly come later this summer when the United States and South Korea usually hold their combined military exercises. The allies describe the drills as defensive in nature, but the North claims they are invasion rehearsals.