US housing roars back despite recession, high unemployment 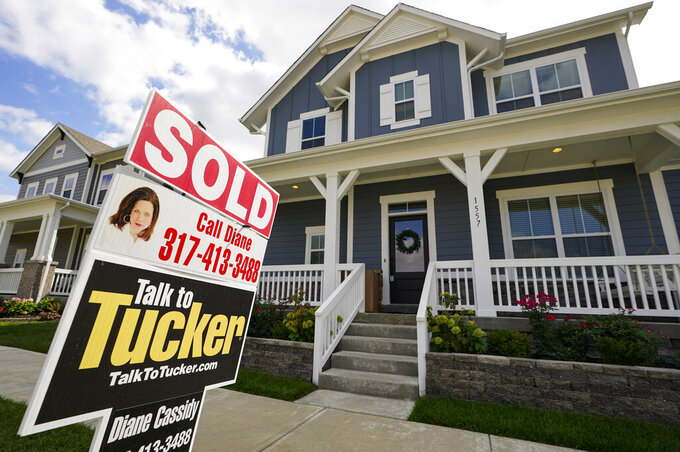 A "sold" sign is posted on a home in Westfield, Ind., Friday, Sept. 25, 2020. The housing market has staged a furious comeback this summer, even as the economy struggles to regain its footing. Home sales have surged to the highest level in more than a decade. The strength has been driven by ultra-low mortgage rates, fierce competition for a dearth of properties on the market and a wave of millennials and others vying to become homeowners. (AP Photo/Michael Conroy)

LOS ANGELES (AP) — The U.S. housing market has staged a furious comeback this summer, even as the economy struggles to regain its footing after being knocked into a recession due to the coronavirus.

After stalling in the first few weeks of the pandemic, U.S. home sales have surged in recent months to the highest level in more than a decade.

The strength in housing has been driven by ultra-low mortgage rates, fierce competition for a chronically low inventory of properties on the market and a wave of millennials and others increasingly vying to become homeowners.

At the same time, the uneven economic fallout from the pandemic, which has hurt many low income Americans while leaving many white collar workers relatively unscathed, has helped keep the downtrodden economy and job market from being a drag on the housing market’s comeback.

“Housing is one of the strongest sectors of the economy this year,” said Jeff Tucker, senior economist at Zillow. “For Americans whose finances are still intact, folks with good credit who didn’t lose their job, they’re forging ahead buying their first home.”

Sales of previously occupied U.S. homes have risen three months in a row after slowing sharply in March, April and May. They climbed to a seasonally adjusted annual rate of 6 million homes in August, the fastest pace since December 2006, according to the National Association of Realtors.

Demand for newly built homes has also been red hot. Sales rose in August by 4.8% to a seasonally adjusted annual rate of 1.01 million units, according to the Commerce Department. New home sales are now up about 43% from this point last year.

Mortgage rates have been a key driver for the market. They’ve fallen this year to record lows, increasing buyers’ purchasing power. The average rate on a 30-year home loan was 2.90% last week, according to data from mortgage buyer Freddie Mac. A year ago, the rate averaged 3.64%.

Perhaps the biggest factor in the housing comeback, though, is the severe imbalance between supply and demand for homes. As of August, 1.49 million homes were on the market, a drop of 18.6% from a year earlier.

The dearth of homes for sale at a time when more millennials are entering their 30s, marrying and looking to buy a home, has helped push up prices. The median price for a previously occupied single-family home reached $315,000 in August, up 11.7% from last year, according to the Realtors group.

While it took home sales years to recover after the Great Recession that began in late 2007, sales have been quicker to bounce back in the current recession because of the shortage of properties on the market.

“It’s the opposite this time around: we have too many buyers and not enough housing,” said Jay McCanless, a housing analyst at Wedbush Securities. “Lack of supply probably gives this demand wave a longer runway than it would otherwise.”

A strong job market tends to be a predictor for housing market strength. The surge in home sales this summer, even though the economy has only recovered about half of the 22 million jobs lost to during the pandemic, points to an uneven economic hardship.

“Housing is a bit of a window right now into the fact that this recession has really hit lower-income people much, much harder than higher-income people,” Tucker said. “The other part of the story here is that the market for who is able to get into homeownership has become a more exclusive club in the last several years.”

Economists expect the housing market will continue to strengthen, despite uncertainty about when the economy will recover from the pandemic.

More than 100 economists and real estate experts are forecasting home prices to increase 3.7% this year and continue growing in 2021, according to a recent survey sponsored by Zillow.

Moody’s Investors Service expects the U.S. homebuilding sector to be stable for the next 12-18 months, citing the strong demand for homes, though the ratings agency flagged concerns about the “stubbornly high” unemployment rate.

Homebuilders have been in prime position to capitalize on the increased demand for homes, and the growth in sales has been a boon for builder stocks. Most are up for the year and have fared better than the S&P 500 during the stock market’s September swoon.

“There’s still upside room to my target price on all four,” he said. “I would be buying those at these levels.”