US leaders urge military to get vaccine shots 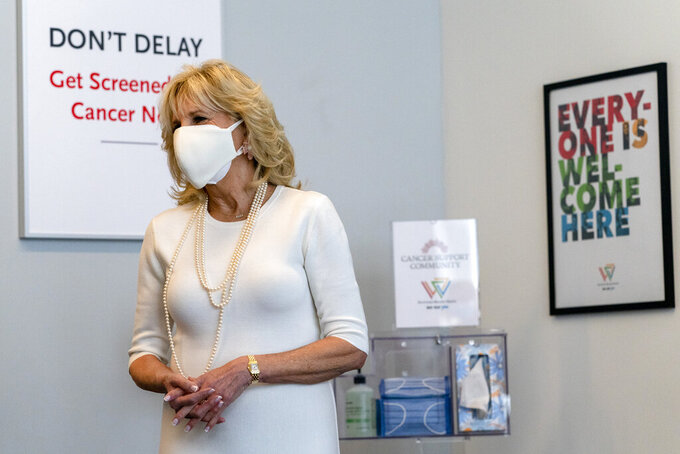 WASHINGTON (AP) — With more than half of America reluctant or flatly opposed to getting a COVID-19 vaccine, a VIP-filled video call on Thursday targeted the nation’s military families with an urgent plea: Get the shot.

“We need your help,” first lady Jill Biden told hundreds of listeners on a call set up by Blue Star Families. ”That’s why we’re encouraging everyone to mask up, socially distance and get the vaccine when it’s your turn.”

The call featured detailed medical explanations from Dr. Anthony Fauci, the nation’s top infectious disease expert, who answered questions from the audience, as well as urgings from Army Gen. Mark Milley, the chairman of the Joint Chiefs of Staff and his wife, Hollyanne, who is a nurse. Their pleas underscored the widespread concern about the reluctance among service members and their families to get the vaccine.

According to senior defense leaders, the percentage of service members declining to get the shot is about the same as the general population — around half. A recent survey by the Kaiser Family Foundation revealed that about 51 percent of U.S. adults say that they won't get the vaccine or that they want to “wait and see.” KFF said that the numbers of those willing to get the vaccine have grown since December.

The trends in the military "are very similar to what we’re seeing in the U.S. population as a whole — that the older population has been more willing to take the vaccine. The younger population has been a bit more hesitant about it," Air Force Brig. Gen. Paul Friedrichs, the Joint Staff Surgeon, told reporters in a recent press conference. "I think as we go forward and we educate our population about the safety of the vaccine, we hope and trust that that will allay some of the concerns.”

While Milley noted that the vaccine is “a personal decision,” he told the video audience that the vaccines have been shown to be safe and highly effective. And Hollyanne Milley added her assessment that, “the vaccine saves lives.”

Audience members flooded the chat with questions, ranging from details about other medical remedies and the safety of the vaccines for people with a variety of different conditions to whether the coronavirus is more deadly than the regular flu.

Fauci fielded a number of them, offering details about how the vaccines have been developed and why they are considered safe. Asked about the effect of the vaccine on a pregnant woman, he said that it is safe, and that many pregnant healthcare workers have gotten the vaccine because they believe the risk of getting COVID is “far greater” than any potential effects of the vaccine.

Defense officials said they don't have detailed statistics on exactly how many service members have declined the vaccine, which is strictly voluntary for the military. As of Thursday, the Defense Department had received more than 872,000 vaccine doses, and had administered more than 500,000.

Friedrichs said that the department has now vaccinated almost everyone who requested vaccines in the first priority group, which includes frontline workers, police, medical personnel, and those caring for patients or military personnel with COVID. In addition, all of the residents and staff at the two armed forces retirement homes were vaccinated.

So far, he said, there have been only two people with reported adverse reactions, and both have fully recovered.

“It’s a voluntary vaccine,” Friedrichs said. “There are people in, I think, every walk of life across our country who are making this choice as they’re offered the opportunity to get vaccinated.” He said the Defense Department is trying to encourage people to get the vaccine, and to reinforce that it is safe and effective. He added that service members who decline the shot are allowed to continue in what ever job they have.

In addition to the vaccine distribution, Defense Secretary Lloyd Austin on Thursday issued a memo that directed everyone on military installations must wear a mask in all indoor and outdoor spaces, other than their personal homes.

The memo laid out exceptions, which include when a person is alone in an office with a closed door and floor-to-ceiling walls or for brief times when eating and drinking.