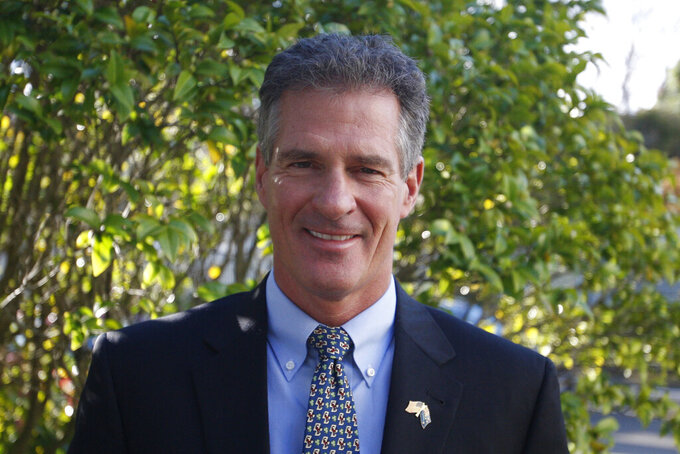 FILE - In this July 11, 2017, file photo, U.S. Ambassador to New Zealand Scott Brown poses for a photograph at the U.S. Embassy in Wellington, New Zealand. The United States government paid for Brown and his wife, Gail, to fly domestically in New Zealand on a private jet so they could avoid going into quarantine at the border, documents show. (AP Photo/Nick Perry, File)

WELLINGTON, New Zealand (AP) — The United States government paid for ambassador Scott Brown and his wife to fly domestically in New Zealand on a private jet so they could avoid going into quarantine at the border, documents show.

Just about everybody who returns to New Zealand is required to spend 14 days in a hotel guarded by the military as part of the nation’s strict strategy to keep out the coronavirus. But the Browns were able to use their special status as diplomats to avoid staying in a hotel, and instead isolated themselves at their home in Wellington.

The Browns' special treatment has upset many New Zealanders. Documents released to The Associated Press under official information laws show the case was discussed by top officials and lawmakers and was not resolved until days before they arrived back.

The Browns returned to New Zealand in late August after spending a month in the U.S. on what the ambassador described as a “working vacation.”

After arriving at Auckland Airport, the Browns went to a private runway and left for Wellington on a chartered jet, documents show. That was because regular domestic flights can't be used by new arrivals who might be carrying the virus.

The U.S. Embassy in New Zealand said Wednesday that the flight was paid for by the embassy and the U.S. State Department, freed up hotel space for returning New Zealanders and was cost-effective.

“As the Browns were at home, the U.S. taxpayer was saved the cost of per diem and other expenses which they would otherwise have been entitled to claim," the embassy wrote in an email.

The documents indicate the discussion about the couple's return began back in June, when Brown wrote an email to New Zealand officials saying, “I need to be assured that I will be able to get into my car and drive home and self-isolate." The ambassador added, "It would be problematic for me to do my job in a hotel.”

Brown told officials that he and his wife, Gail, would make sure they tested negative for the virus in the U.S. before returning.

New Zealand officials responded that top lawmakers in the government's Cabinet were discussing what to do about diplomats — who they can't force into quarantine because of their special status under the Vienna Convention — and “we are hopefully close to the decision-point on these issues.”

But the uncertainty would drag on for weeks.

An initial plan had the ambassador completing his two-week quarantine in Auckland at the home of the U.S. consul-general. A second plan had Brown driving the eight-hour trip back to Wellington.

“We'll have his vehicle pre-positioned at the airport with food, water, and extra fuel, and will arrange a ‘contact-less’ handover of the keys,” U.S. officials wrote in an email.

In the end, U.S. officials told their counterparts it was their preference to book a charter flight. Brown wrote that he'd gotten approval for the plan from Washington.

“I am hopeful that this rock solid, logical plan can be approved so I can start the balls moving to make it happen,” Brown wrote on Aug. 20 from the U.S., just a week before he was due to arrive back.

The following day, New Zealand officials wrote to say the Ministry of Health had given the plan the thumbs-up.

Brown, a former Republican senator from Massachusetts, has close ties with President Donald Trump and was once considered a possible running mate. Brown and his wife plan to return to the U.S. permanently within the next few weeks, where Brown will take up a new role as president and dean of New England Law school in Boston.