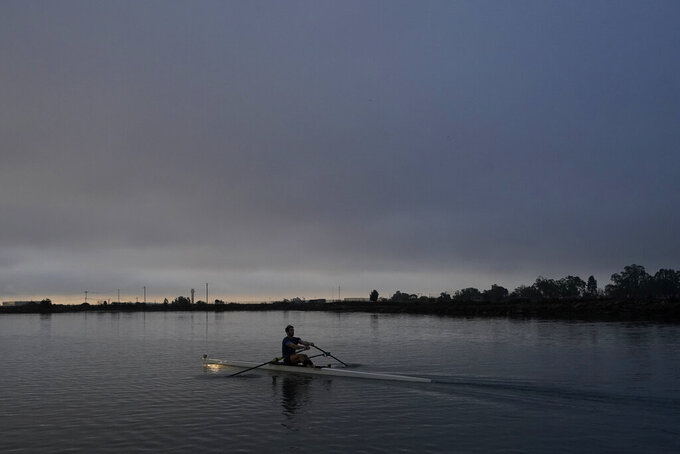 Alex Karwoski practices in the Oakland Estuary in Oakland, Calif., Thursday, Nov. 19, 2020. Nearly two dozen U.S. men's rowers signed on to keep training for another year after the Tokyo Olympics were delayed until 2021. That meant adjusting full-time jobs for many, altering wedding plans for one and maintaining apartment leases in the costly Bay Area while also dealing with different practice protocols given the coronavirus pandemic. (AP Photo/Jeff Chiu)

ON THE OAKLAND ESTUARY, Calif. (AP) — With a thick, gray morning haze hanging extra low over the Oakland Estuary and limiting visibility, U.S. men's rowing coach Mike Teti lifted a bullhorn to his masked face from the coach’s boat and asked pair Liam Corrigan and Chris Carlson whether they had seen the American four crew in the water ahead.

They were indeed down the way, all fine — getting through another tough day of training for the delayed 2020 Tokyo Olympics. Teti motored on through the debris and dirty water from a recent storm until the boat came into view from a distance. In stroke position sat veteran Tom Peszek, just the experienced athlete to be leading the way when training conditions are far from ideal.

With everyone safe and accounted for, Teti could turn back and check on the others, as he does daily by capturing video snippets of each rower — fortunate to never have lost a phone to the estuary given how regularly he reaches it out over the water.

As soon as the Tokyo Games were postponed by the coronavirus pandemic, Teti scheduled individual meetings with each rower to gauge who could commit to another year of training in the Bay Area and put real life on hold a while longer.

He fully understood if some wanted to move on with career plans or in their personal lives. Every single man signed on for Tokyo one year later.

“There have been some difficulties, but we’ve been able to get out in some of those boats when other people, other crews, couldn’t do that and people in general can’t go to the gym,” said Corrigan, who graduated from Harvard with a physics degree and, at 23, is a rising star on the national team.

“When you put a lot of time in, a lot of guys have put in four years, it’s not so hard to add another year," he added. “In your mind there’s hardly a choice.”

Now, to keep everyone safe and healthy while training, some rowers go out in pairs, others as four and many often even as singles — including those cleared last month to return to the water following a quarantine period because they contracted COVID-19.

When the seriousness of coronavirus became clear, Teti immediately took his rowers off the water. He set up the athletes with rowing machines at their homes as the Bay Area went into a shelter-in-place order in mid-March. Teti would send out workouts in a Google document, and the athletes would report what they had completed.

“It’s not ideal but we’re able to get it done,” Teti said. “We’re not out in an eight (boat) but we’re able to train and these guys were able to keep their jobs. These days, that’s a blessing. We’re conscious that there are a lot of people out there who are really struggling.”

The Americans represent quite the impressive list of professionals away from their sport — an investment analyst; a paralegal; a global real estate development analyst; an associate at a non-woven materials and engineering papers firm; a consultant at management firm McKinsey.

These are the lower-profile Olympic athletes working real jobs and striking the difficult balance between training early then heading to work to earn a living. A three-time Olympic rower himself, Teti understands. He also is married to Kay Worthington, who won a pair of Olympic gold medals for Canada in crew.

“I tell everyone, it’s the highest-IQ team I’ve ever been around,” Teti said. “They’re just racers. They’re an easy group. They’re talented and they have potential but they’re also old-school. They’re going to come to work every day.”

There are 22 rowers vying for 14 Olympic spots. The eight and four boats have qualified for Tokyo and Teti isn’t sure when, where or how the pair will get its chance given the international travel limitations of COVID-19.

After a break later this month around Christmas, the team is set to relocate for about a month to a bubble environment at an elite training center in Southern California ahead of a national selection regatta in February.

Alex Karwoski knows how lucky he and several teammates are after a bout with COVID-19.

In late October, Karwoski left Virginia for a cross-country drive back to the Bay Area to rejoin most of the other U.S. rowers already training together.

Karwoski stopped in Ann Arbor, Michigan, to see a friend, then spent another night with a pal on a mountaintop in Casper, Wyoming. Karwoski wore a mask. He packed all his own food. He washed his hands, used sanitizer and tried to do everything right. He still got sick with COVID-19, and that meant so did his three rowing teammates who are his roommates — all had mild symptoms.

“We were fortunate that our cases were relatively minor and it certainly does reinforce how contagious coronavirus is,” Conor Harrity said.

Karwoski was working part-time for the Marin County-based company Play Well Technologies, leading an engineering after-school program for kindergarteners through eighth-graders in civil and environmental engineering.

He guesses the additional year will cost him close to $25,000, and the rowers are roommates who typically share food and essentials from Costco. Each athlete also receives a $1,300 monthly stipend from the U.S. Olympic Committee.

He stuck with the Olympic quest even though it meant changing his wedding plans. He still got married Sept. 19, then turned his attention right back to rowing and returned to the Oakland training headquarters.

He and his wife, Shelby, had a small ceremony with about 20 people — mostly immediate family — on a beach in front of the boathouse at the San Diego Rowing Club.

“It was very different from the original plan, of me (hopefully) making it to the 2020 Olympics and then coming back home for a big, fun wedding, but we still had a blast,” Peszek said in an email.

The 35-year-old Peszek has worked in the IT department for Kaiser Permanente since moving to the Bay Area from Austin, Texas, in June 2018. If he makes the team, Peszek — he's a tad superstitious and doesn't want to get ahead of himself — would become the oldest man to row for the Americans at the Olympics. He turns 36 in January. Teti was not quite 36 at his third and final Olympics at Barcelona in 1992, and Bob Kaehler rowed at age 36 but was a month younger than Pezek would be.

Dr. Michael Gervais, a high performance psychologist who works with the Seattle Seahawks, other professional athletes and Olympians, isn't surprised that these men and women find ways to adapt amid challenges like the pandemic.

“World-class athletes have a distinct advantage when it comes to our current condition. For most people, an uncertain future increases a sense of anxiety. Professional athletes are highly practiced and highly skilled at managing, even thriving with uncertainty,” Gervais said.

That's why when out in the fog that day Peszek automatically began to check his route more regularly.

These heads-up decisions made under possible duress are why Teti so embraces and values a well-rounded rower. The athletes credit Teti for understanding the demands of balancing the Olympic lead-up with life — work, spouses, appointments.

“This is sport. This is amateur sport,” Teti said. “You want them to enjoy it.”