US steers El Salvador funding away from government 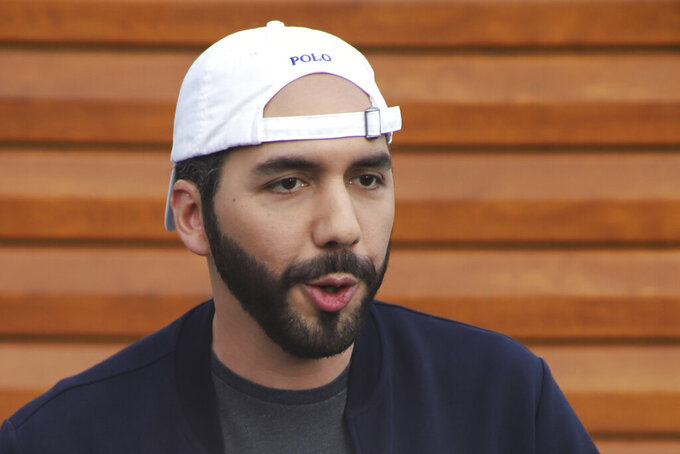 FILE - In this Feb. 17, 2021, file photo, Salvadoran President Nayib Bukele speaks before the start of vaccination of medical staff with the AstraZeneca COVID-19 vaccine at the Atlacatl Medical Unit of the Salvadoran Social Security Institute in San Salvador, El Salvador. Allies of Bukele, including his Cabinet chief, have been included in a list of senior officials in Central America deemed corrupt by the U.S. State Department, according to a copy of a report obtained by The Associated Press. (AP Photo/Salvador Melendez, File)

SAN SALVADOR, El Salvador (AP) — The United States Agency for International Development will redirect its funding from El Salvador's state institutions to its civil society groups as tensions rise between the two governments over the Central American country's removal of Supreme Court justices and the Attorney General.

USAID Administrator Samantha Power said in a statement Friday that the agency has “deep concerns” about the shake-up in the justice system earlier this month and more generally about transparency and accountability.

Funding will be redirected from the court and Attorney General's Office, the National Civilian Police and El Salvador's Institute for Access to Public Information and given instead to local civil society groups and human rights organizations “for promoting transparency, combating corruption and monitoring human rights.”

The agency declined to say how much funding was being redirected.

President Nayib Bukele responded immediately via Twitter. “How great that (civil society organizations) receive foreign financing, because they will not receive a cent from the Salvadoran people.”

In another tweet, the president wrote that if you ask any Salvadoran migrant at the U.S. border why they left their country, they will respond first, lack of jobs and second, that it was unsafe. “It’s very revealing that @USAID chose to stop funding... SECURITY! Is the real plan to create more immigration?”

Bukele's New Ideas party won a supermajority in Feb. 28 elections. New lawmakers were seated in the unicameral congress May 1 and immediately voted to remove the five justices from the Supreme Court's Constitutional Chamber in a process the justices said was unconstitutional. The new congress also voted to replace the Attorney General with a Bukele loyalist.

Those moves combined with the new congressional supermajority removed the remaining checks on Bukele's power, who remains extremely popular.

In February 2020, Bukele sent heavily armed troops to the then-opposition controlled congress when it balked at approving a loan for his security plan.

Early in the COVID-19 pandemic, Bukele publicly accused the constitutional justices of causing the deaths of Salvadorans when they ruled his mandatory stay-at-home order unconstitutional.

Bukele's rapid consolidation of power has worried international observers and the Biden administration that El Salvador's fragile democracy could be eroded.

“Respect for an independent judiciary, a commitment to the separation of powers, and a strong civil society are essential components of any democracy,” Power said. “The United States remains firmly committed to supporting democratic governance as we partner to improve economic and security conditions and to address the root causes of irregular migration from Central America.”

Earlier this month, White House Special Envoy Ricardo Zúñiga met with Bukele on a visit to El Salvador. He said on a local news program that the U.S. government thought it best for El Salvador to reverse the changes to the court and Attorney General.

Bukele responded via Twitter. “For the voices that still ask us to return to the past, with much respect and affection: the changes that we have made are IRREVERSIBLE,” he wrote then. “We are not going to return to the past, we will go toward the future. We would like them to accompany us, but if they don’t want to we understand.”

As the relationship with Washington sours, Bukele has increasingly played up the burgeoning relationship with China. This week China sent 500,000 doses of Sinovac vaccine and the Salvadoran congress ratified a cooperation agreement with China that calls for about $60 million investment in projects in the country.