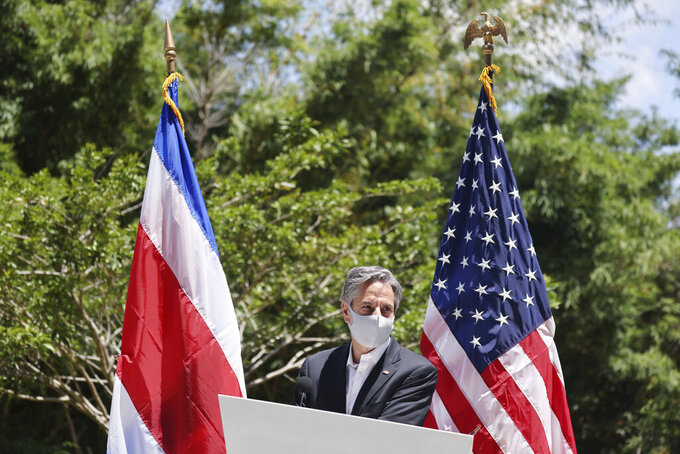 SAN JOSE, Costa Rica (AP) — U.S. Secretary of State Antony Blinken is trying to entice Central American nations to tackle the corruption and poverty that have helped drive a surge of migrants to the U.S.-Mexico border and presented an early challenge for the Biden administration.

In his first visit to Central America since taking office, America’s top diplomat has met with foreign ministers and leaders from the region and Mexico. On the two-day trip ending Wednesday, Blinken avoided publicly criticizing any particular government, focusing instead on Biden administration plans to distribute COVID-19 vaccines and other assistance, such as a proposed $4 billion aid package.

“We think that’s the best way to ensure greater stability and improve the lives of people across the region, which ultimately is in the United States’ interest as well,” Blinken said in a joint news conference with President Carlos Alvarado of Costa Rica.

The approach is a departure from the Trump administration, which reacted to an increase in migrants by expelling asylum-seekers to Mexico or Central America and stepping up efforts to build a wall along the American Southwest border, among other measures.

After a decline at the start of the pandemic, the number of apprehensions at that border began rising under Trump and swelled in the early months of the Biden administration. The Border Patrol had more than 170,000 encounters, including 50,000 people traveling with families, its highest total since March 2001.

It was a major theme of the private talks Blinken had late Tuesday with the foreign ministers.

The U.S. hopes Mexican and Central American officials can do more to impede the trafficking of migrants, especially children. The Biden administration has been expelling single adults who cross the border and most families but it allows unaccompanied minors to enter the United States and pursue asylum or other legal claims for residency. U.S. authorities encountered more than 17,000 children traveling alone along the border in April, compared with a record 18,960 a month earlier.

There are limits, however, to what Mexico and Central America can do amid the economic devastation of the COVID-19 pandemic. Leaders made it clear they hope for some of the 81 million vaccines that President Joe Biden has said he will distribute around the world. Details of the distribution plan are expected this month.

Alvarado, whose nation has attracted admiration for its stability, relative affluence and environmental protection, made it clear that Costa Rica would accept only vaccines that have no political strings attached.

“We’re talking about saving lives, but that doesn’t mean in receiving a donation we will compromise our dignity as a nation,” he said at the news conference.

The relative success of Costa Rica was another theme of the two-day visit. Blinken noted the close ties between the countries, pointing out that 40% of the country’s export go to the U.S. and that 70% of the foreign direct investment comes from the U.S. Costa Rica is also a major tourist destination and, before the pandemic, hosted more American students than any other country in the hemisphere.

On Wednesday, Blinken met in private with his Mexican counterpart, Marcelo Ebrard, and visited a nongovernmental organization that provides children and families with recreational and educational activities and helps steer teens away from criminal activity. It’s the kind of organization that would get a piece of the $4 billion in the proposed aid package that the Biden administration does not want to give directly to government entities in the region.

Blinken suggested such organizations can play a role in persuading people not to migrate. “People should not make the dangerous journey to our border, but we know it is not enough to say, ‘Don’t come,” he said. “We have to work together to make it safer for people across Central America to stay in their homes and communities without fear.”

Highlighting the relationship with Costa Rica and the country’s progress enabled Blinken to contrast it with others in the region such as Honduras, whose president has been linked by American prosecutors to drug trafficking, and Nicaragua, where the authoritarian government of President Daniel Ortega is under U.S. sanctions.

Blinken avoided any direct remarks about El Salvador’s president, Nayib Bukele, a popularly elected leader who has an increasingly tense relationship with the U.S. because of his moves to consolidate power and weaken El Salvador’s other democratic institutions.

Still, it was clearly on Blinken’s agenda when he said, “We meet at a moment when democracy and human rights are being undermined in many parts of the region.” He noted the “erosion of judicial independence” and crackdown on independent media, in an apparent reference to Bukele, and the “quashing of anticorruption efforts,” which likely refers to Honduras and elsewhere.

“We understand how fragile democracy is. We’ve experienced setbacks in our own country in recent years,” he said. “But that experience has underscored for us just how important it is to shore up the institutions and the norms that safeguard our democracy.”

The issue of corruption is certain to loom over Vice President Kamala Harris’ trip to Guatemala and Mexico next week, where she plans to meet with the presidents of both nations to discuss joint efforts to address the root causes of migration. Harris’ chief spokesperson emphasized that the vice president’s efforts to secure economic investments and humanitarian aid when outlining her plans for the trip.

The goal is “to deepen our strategic partnership and bilateral relationship” with both countries and “advance a comprehensive strategy to tackle the causes of migration,” spokesperson Symone Sanders said. “We will also engage community leaders, workers, young innovators and entrepreneurs and others about ways to provide economic security, address the core factors of migration, and to give people the hope for a better life at home.”