The U.S. women are the team to beat in Tokyo. Of course. 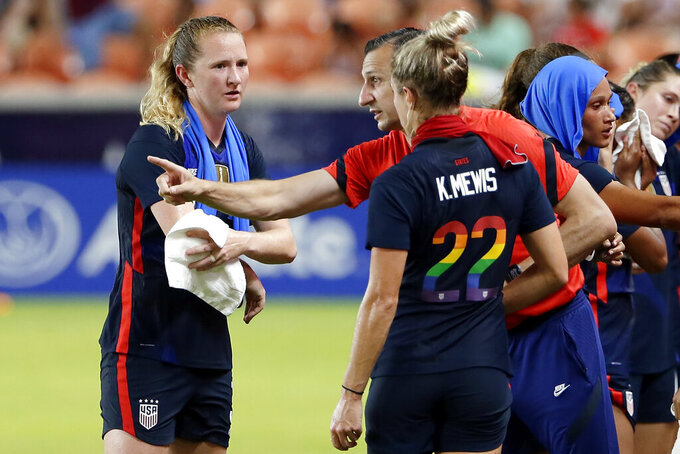 The United States women’s national soccer team has something to prove at the Tokyo Olympics.

It's not so much about revenge after a surprising loss to Sweden at the 2016 Rio Games but, rather, a new goal: The U.S. can become the first team to win an Olympics following a World Cup victory.

The U.S. team, winner of the 2019 World Cup in France, is ranked No. 1 in the World. They're undefeated in 42 straight matches and show no sign of slowing down heading into the 2023 World Cup.

The biggest hurdle along that path will be the Olympics, where a small roster, a condensed schedule and the hot and humid conditions will all be challenges — along with the competition.

Andonovski emphasized versatility in choosing his squad for Tokyo. Experience counted, too, with the average age of the team at 30.8 years old — the oldest U.S. Olympic roster ever. Seventeen of the 18 players were on the World Cup squad.

“There’s so many boxes that the players need to check in order to make the roster, starting from health and fitness, and very important, performance. They’ve got to perform. It doesn’t matter if they’re versatile if they don’t perform well. So there’s a certain level of performance that they need to to have, or a certain way they need to execute the task," Andonovski said. "And then obviously the experience that they have, they've already been on this team in big tournaments.”

The United States, in Group G, will open with nemesis Sweden in Tokyo on July 21. In Brazil, Sweden knocked the Americans out in the quarterfinals on penalties, after which goalkeeper Hope Solo famously called the Swedes “cowards” for bunkering in on defense.

One of Sweden's advantages in 2016 was coach Pia Sundhage, who was the former U.S. coach and knew her former team — and it's weaknesses — well. She's now head coach at Brazil, while Sweden is led by Peter Gerhardsson.

There are 12 teams competing, separated into three groups. The tournament starts on July 21 and will be played across six cities in Japan with the finals set for Aug. 6 at Japan National Stadium.

In addition to the Americans and Sweden, the teams competing in the tournament include host Japan, Australia, Brazil, Canada, Chile, China, Great Britain, Netherlands, New Zealand and Zambia.

Germany, the winner in 2016, is not among the teams in the field. UEFA qualifying for the Games was the Women’s World Cup, meaning France, Great Britain and runner-up Netherlands won the berths.

Women's soccer joined the Olympics in 1996. The United States has four gold medals overall, and has advanced to the final match in all but the 2016 edition.

The Olympics come as the U.S. team continues its fight for equitable pay with men's national team players. While a judge threw out the team’s legal case, the women have appealed to the Ninth Circuit. And negotiations are ongoing with U.S. Soccer.

The recently released documentary “LFG” chronicles the team's efforts. U.S. Soccer countered the film with a Twitter thread. No doubt it will be a frequent topic of conversation over the course of the tournament.

Like Andonovski, Sundhage has a talented, deep Olympic roster with five-time FIFA World Player of the Year Marta, as well as Debinha and forward Ludmila. Also included is Formiga, who is a seemingly forever-young 43 and has played in a women's record six Olympics.

In announcing her squad, Sundhage sang: “I'm so excited, I just can't hide it.”

“I've learned a lot from the Brazilian players and I hope we've also taught them a couple of things about cohesion and about being on the same page and doing our best,” Sundhage said.

The Canadians qualified along with the United States in the CONCACAF region. Led by new coach Bev Priestman, Canada's roster includes Christine Sinclair, the all-time top international scorer among men and women.

As captain of the Canadian team, Sinclair, 38, is making her fourth Olympic appearance. She has appeared in 15 overall Olympic matches, scoring 11 goals.

At the 2016 Brazil Games, Sinclair scored the game winner in a 2-1 victory over Brazil for Canada's second consecutive Olympic bronze medal.

Sinclair has 186 career goals in 299 appearances with the national team.

Zambia is the lowest ranked team at 104. Known as the Copper Queens, the team upset Cameroon in the CAF qualifying tournament to earn a spot in Tokyo.

Zambia's preparation for the games was hampered when it had to pull out of a friendly with Great Britain on July 1 because of complications over coronavirus travel restrictions.